SPECIAL REPORT: Developers are banking on a change in sentiment later this year in Perth’s challenging apartments market. 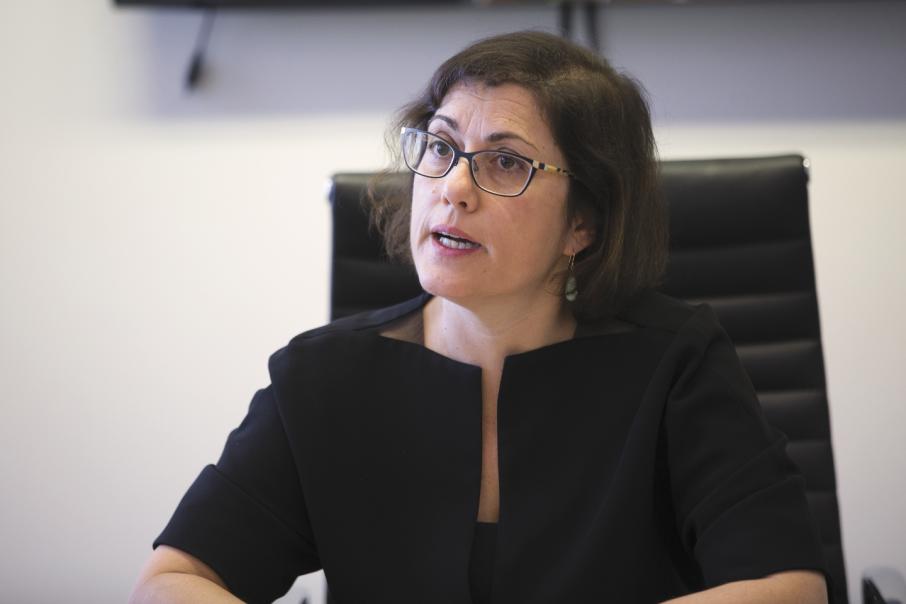 Tanya Trevisan is particularly choosy about where her company will launch projects. Photo: Attila Csaszar

Developers are banking on a change in sentiment later this year in Perth’s challenging apartments market.

Sales are slow, sentiment is weak and the prospects of future growth in the Western Australian economy are clouded in uncertainty.

But that’s not a problem for many of Perth’s apartment developers, who are remaining staunchly confident in a market that’s best described as patchy.

Slowing population growth in WA as the resources boom ends has had a marked effect on the sector. 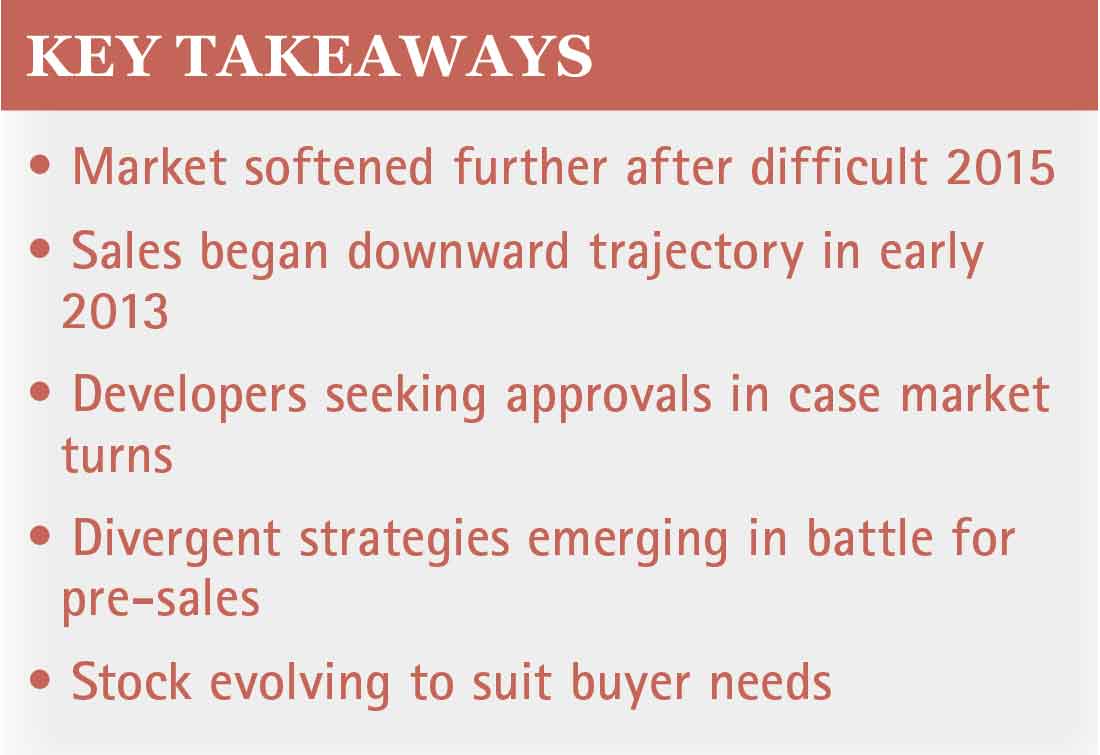 A market that was once burgeoning, where pre-sales could be achieved in less than a month, is now challenging. Projects are taking more than six months, and in some cases up to a year, before enough apartments are sold to proceed with construction.

The latest data from the Real Estate Institute of Western Australia showed multi-unit sales were down 39 per cent at the end of March, compared with the same time a year earlier.

Reiwa says sales have been on a downward trajectory since the early part of 2013, with the biggest contractions felt in the south-western suburbs.

Median apartment prices closely reflected those in the single dwelling market, falling 1.6 per cent over the same period. 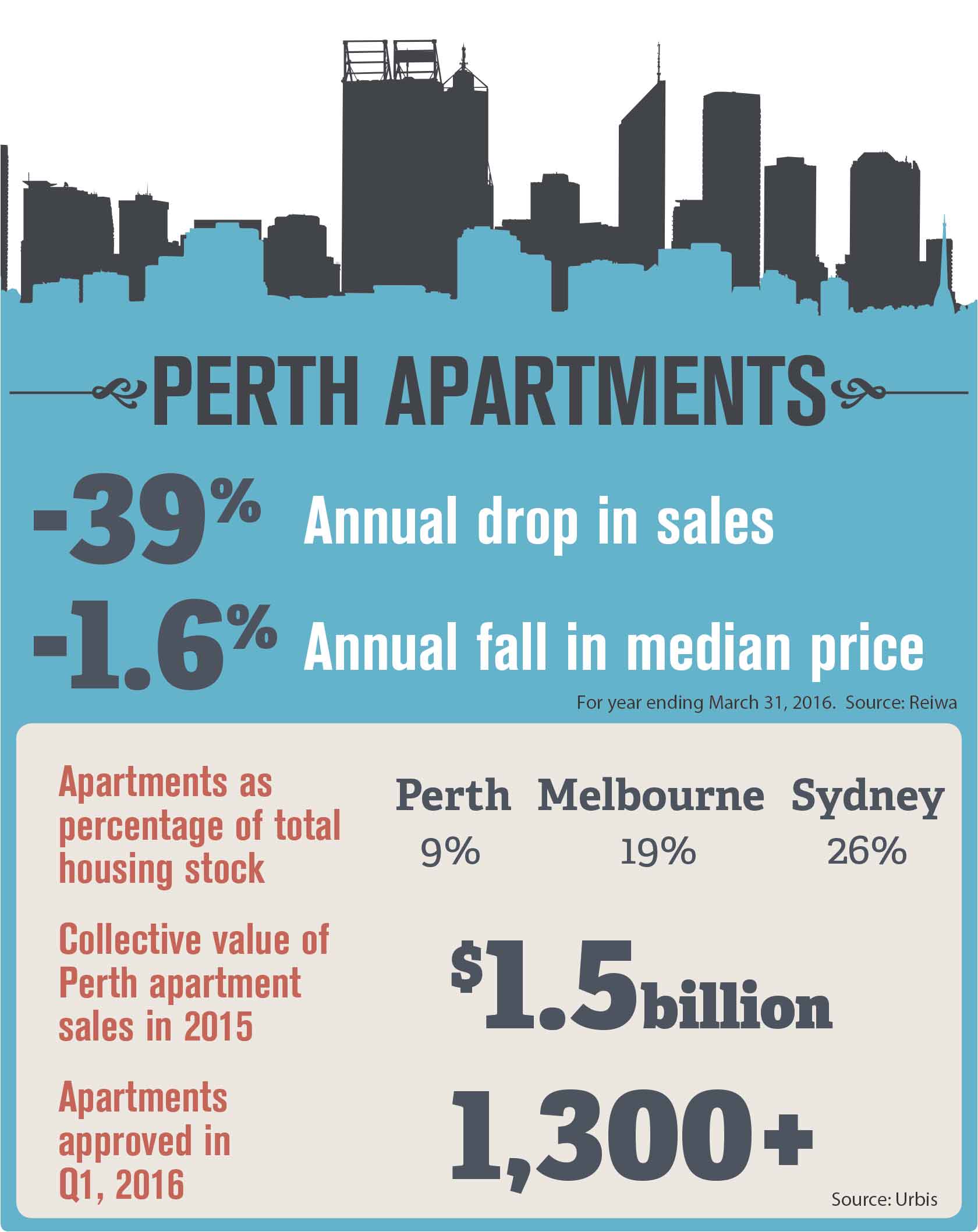 They are sobering statistics, but apparently they are not a worry for Perth’s apartment developers, as well as some big new entrants to the market.

The scale of projects being pitched in Perth is unprecedented, with 12 projects of 30 storeys or more being planned.

And while some of those projects – particularly a wave of mega-towers proposed in South Perth – have caused considerable community angst and sparked widespread debate, developers remain undaunted.

Psaros managing director Mike Enslin said his company remained very confident in the prospects for Perth apartments in the face of challenging conditions, even in the short- to medium-term.

“That’s why you’ll continue to see people putting in planning applications and getting approvals in their back pocket, because the market will turn,” Mr Enslin told Business News.

Mr Enslin went as far as to say he expects the market to turn shortly, predicting a shortage of apartment stock to hit Perth by the end of the year.

“There is a perfect storm of a subdued market to sell into, as well as the banks changing their lending criteria,” he said.

“So projects are taking a long time to get started, and some of them will not get started at all.

“Eventually buyers will come to a realisation that there is actually a limitation of stock, and that will be one of the reasons we’ll see more activity in the market.”

That set of circumstances would be almost unthinkable for a market that has been polarised by debate over whether it was heading for a major oversupply as recently as two years ago.

Market analysts at investment bank JP Morgan recently flagged a national apartment glut, saying there was an oversupply of more than 70,000 dwellings in Australia, and banks were revaluing off-the-plan purchases well below the initial price.

While that predicted oversupply is largely restricted to Sydney and Melbourne, those conditions still have flow-on effects in Perth.

Mr Enslin said Perth’s apartment market had been through all the stages of speculation in terms of supply, and reiterated his case that it was heading for a shortage.

“Yes, there is an oversupply of housing in Perth, I don’t think the stats necessarily lie; but as far as apartments are concerned, I think there is going to be a shortage, just based on the fact that there’s not going to be as many projects started,” he said.

“You could probably name on one hand the number of projects that have started this year, and I think that’s going to be the case for a little while longer while the banks are setting their policies based on the east coast.

“They certainly aren’t the policy settings that are required here.”

While Mr Enslin’s views are extremely bullish, he’s not alone.

Blackburne Property Group managing director, and 2016 40under40 First Amongst Equals, Paul Blackburne, has a similar outlook.

Mr Blackburne’s company has five projects being marketed across the city, totalling more than 300 apartments and collectively worth upwards of $200 million.

And despite the tough sales conditions, Blackburne is planning three more project launches around October, with those developments carrying a collective value of more than $250 million.

“We are expecting a fairly strong upswing in October, and that’s why we’re launching three projects in that period,” Mr Blackburne said.

“The funny thing is, we are still getting between 200 and 400 fresh new inquiries per month, on the projects that are out marketing currently.

“We’re getting that sort of volume of inquiry but sales are just steady.

“The only reason sales aren’t strong is just confidence. All the fundamentals are there and the quality is there.”

The tough conditions are bringing out different strategies among developers, each targeting a niche in an ultimately competitive zone.

And things are likely to get even more competitive, according to Mr Blackburne, as developers seek an edge by entering previously untapped markets.

One of Blackburne’s upcoming projects is at the end of the train line at Butler, on land the company purchased from a prominent land developer, the identity of which Mr Blackburne declined to reveal.

“Some of the land developers understand their business model needs to change because of the trend towards apartment living,” he said.

“Just being able to buy farms and rezone them and sell off blocks of land is not going to be as easy as it once was, because of the increasing demand for inner-city and apartment living.

“I would say the majority of land developers will be trying to expand into apartments in the next two years, some of them are already trying.”

Mr Blackburne said he was focusing firmly on providing resort-style facilities as his company’s point of difference.

“Because the market is mostly local owner-occupiers, people want better design than what you’ve seen in Perth previously,” he said.

“That’s why our buildings are selling well; firstly because we put a lot more into design and the facade of the building.

“Anything over 100 apartments, we’ll provide a concierge – it’s meant to feel like you’re living in a luxury resort as your home.”

For TRG Properties, ranked 13th in BniQ’s property (built-form) developers list, it is the downsizer market that is firmly in the developer’s sights.

TRG Properties chief operating officer Tanya Trevisan said the company was particularly choosy about sites – ideally in places where there was not already a lot of supply.

Those locations often neatly lined up with where downsizing baby boomers would like to live, in established suburbs within 20 kilometres of the CBD.

But while Ms Trevisan said TRG Properties’ projects at Perry Lakes and Port Coogee had sold well, she did acknowledge it was challenging to achieve those sales.

“Obviously it is a subdued market at the moment, but I think we are doing better than most, probably due to the, relatively speaking, rarity value of our locations,” Ms Trevisan told Business News.

“Our market is predominantly owner-occupiers and downsizers, and I think people can only sit on their hands for so long.

“Life still happens; their kids leave home and they want to go into semi-retirement and start travelling, but you can only postpone those kinds of decisions for a certain amount of time.

“Ultimately you have to make the choice to get on with your life.”

Ms Trevisan said providing apartments for the downsizer market was a very different proposition to creating an entry-level home for a first-time buyer.

“People are looking for things you can touch and feel, they want to know what the finishes are like in the kitchens and the bathrooms, what the ceiling heights are and how big are the balconies,” she said.

“Downsizers are leaving a house with a large garden behind. And that’s one of the reasons they are leaving their house by the way – the maintenance and the impost of that.

“But equally they still want to be able to hold a dinner party for six or eight people out on their balcony.”

BGC Development, which is an offshoot of Australia’s biggest building company, is starting to target more distant locations for new projects.

BGC managing director Julian Ambrose said the builder and developer’s latest projects would be located away from the inner city and its surrounding suburbs.

“We’ve got a couple further out, along the transport nodes,” Mr Ambrose told Business News.

“I think there is a different demand profile out there.

“I’m not saying it’s any stronger, but I think that it’s more likely that if there is a bubble, it’s going to be in the city, because there is so much stuff going on in town.”

“The difference is, if you go out to the suburbs, people are doing blocks of 15 to 30 and there might be two or three developers.

“From acquisition of land through to completion of project might be two or three years. These big projects in town where people are planning 800, those sorts of things take five years.

“The chances that you’re going to have a couple of big projects hit at the same time, at the wrong time, is much higher when you’re in the city; that’s where you tend to see the big busts around town, rather than the ’burbs.”

However, Mr Ambrose did not share his counterparts’ confidence that conditions would get better soon.

Mr Ambrose said he didn’t believe it was accurate to say supply was dwindling, with BGC’s construction division in negotiations on or having recently signed deals on four significant projects for third-party clients.

He said market conditions would likely closely mirror the established housing market, with little room for upside in the short to medium term.

“Interest rates aren’t going to go any lower so that’s not going to be a spur. I don’t think unemployment is going to get any better, I don’t see any strong economic growth coming through in WA, I don’t see much changing is the bottom line,” Mr Ambrose said.

“I’m not sure that I would expect a strong pick-up towards the end of the year.”