Developers get out of the office

SPECIAL REPORT: Developers and investors are looking beyond office buildings to explore a variety of property opportunities across Perth. 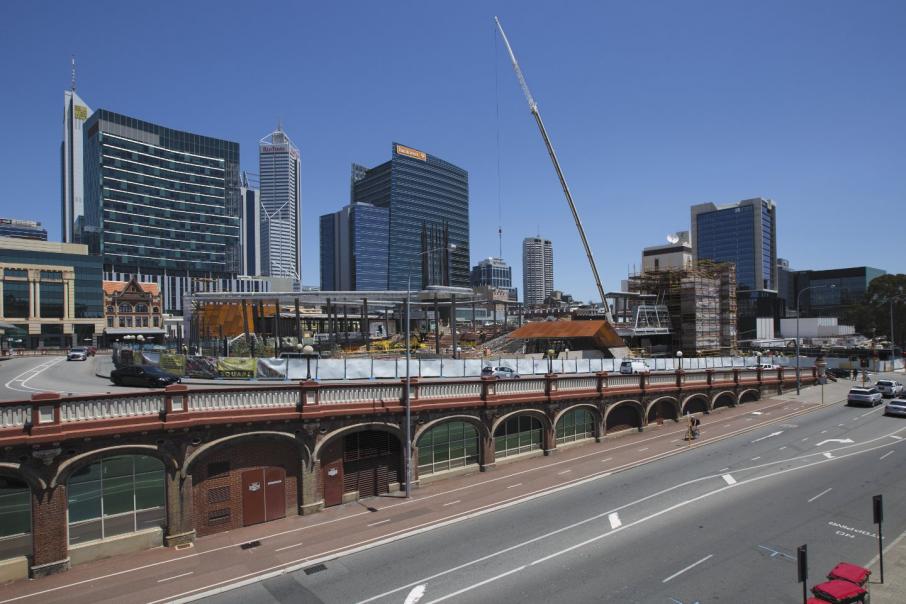 Yagan Square, a new retail, food and beverage precinct, is set to open in 2018 and is one of several developments planned for the MRA’s Perth City Link project. Photos: Attila Csaszar

The sounds of construction activity reverberating across the city and the sight of cranes at work are ongoing reminders of the number of projects currently under way in Perth.

However, only one of those projects is a major commercial office building – the 54,000 square metre Capital Square project being developed by Malaysian investment group AAIG, which will be home to Woodside Petroleum once completed in 2018.

As the office market continues to settle following an all-time high of development activity in 2015-16, during which time 130,000 square metres of space was added to the CBD, there is only one other project likely to go ahead in the near term.

That statement comes with a caveat, however, with the timing for Chevron’s new digs at Elizabeth Quay uncertain.

The Metropolitan Redevelopment Authority last month granted the resources company its second development extension since purchasing the site in 2013, delaying the project by an additional 12 months.

In the long-term there is one commerial office development likely to go ahead - Brookfield Property Partners announced last Friday that it was committed to developing its $1.1 billion mixed-use twin towers at Elizabeth Quay, which will include 50,000sqm of office space, following its entry into project delivery agreements and receiving approval from the MRA.

Construction completion is anticpated for 2022-2023.

Brookfield Australia head of development Carl Schibrowski noted that the towers' initial concept had changed from being a 100 per cent office development to include retail and residential space, as well as a luxury hotel, due to Perth's office market conditions.

“It’s highly unlikely that any group would look to develop anything unless they got at least 50 per cent (tenant) pre-commitment,” Mr Tsagalis told Business News.

“But for every rule there’s an exception; if there was a large-scale user, and there are a couple floating around, that would test the waters.

“What landowners and developers look for is quality of covenant and size of occupancy; if those two boxes are ticked, we could potentially see that happen.”

However, Mr Tsagalis said there had been a slight pickup in office leasing activity recently, fuelled by the migration of tenants from the suburbs and the fringes into the CBD, occupying larger footprints to take advantage of current commercial terms.

“There’s still a lot of building going on in the city,” he said.

“In 12 to 18 months we’ll see some magnificent development coming to the market and the city will become a lot more appealing.”

While activity in the office market has slowed, work continues apace on numerous other projects across the city.

Raine Square, Forrest Chase, Plaza Arcade and Yagan Square collectively represent more than $250 million worth of proposed retail projects that have started to take shape across the CBD.

There are also six hotels under construction in central Perth: two DoubleTree by Hilton hotels (one in Barrack Square and the other in Northbridge); QT Hotel Perth on Barrack Street; the Ritz Carlton; the Westin Hotel at the eastern end of the CBD; and the Mantra Hotel on Hay Street.

There are more than 800 apartments under construction in the inner-city precinct, according to management consultancy Urbis’s latest Perth ‘Apartment Essentials’ report.

Urbis regional director Ray Haeren said the major focus for development in the coming years would be around Elizabeth Quay and Perth City Link, where the MRA has two sites left (Lot 10 North and South).

Mr Haeren said it was likely Lot 10 would include an office component when developed.

International developer Far East Consortium has recently made its first move into the Perth market via significant investments in sites across Elizabeth Quay and Perth City Link.

“When government spends a large amount of money on infrastructure projects like this there’s a huge social dividend of people visiting and spending money in that space,” Mr Sweet said.

“We saw Elizabeth Quay really as the best opportunity in Australia, so we jumped in with both feet.”

Construction was already under way for its $500 million Ritz Carlton and The Towers (apartment) development at Elizabeth Quay.

The group has also secured five lots at Perth City Link, where two sites near Perth Arena will be developed for apartments and the Dorsett Hotel, a brand owned by Far East Consortium.

Mr Sweet said plans were still being finalised for the developer’s remaining three sites, along Rowe St back toward Yagan Square, but expected it to largely contain apartments with food and beverage offerings.

“The only way that the office, hotel and residential markets are going to get better is if we really continue to promote Perth internationally as a good place to recreate, invest and also study,” he said.

“There are always challenges but we’re starting to see green shoots in the market and a lot more interest from everyone we deal with throughout Asia and Australia.”

Sirona Capital managing director Matthew McNeilly said market confidence had picked up in WA during the past 12 months, with interest from interstate and overseas, particularly Asia.

“There is an emergence of new lenders who see an opportunity in the provision of credit; to me that’s exciting, given credit is the lifeblood of this industry,” he said.

“If credit quality starts to be questioned on the east coast, that could impact WA; all calls on credit are made from Sydney and Melbourne.

“I’m hopeful that in the long-term we’ll end up with the evolution of a deeper credit market so we won’t be so reliant on our four big banks.”

Another notable change in the market during the past year had been the election of a new government, which Mr McNeilly believed was a net positive for the industry overall.

“It’s pretty flat in terms of overall conditions but that doesn’t mean things can’t change quickly, as they do in Perth. I’m a reasonably optimistic chap and I think it’s still a market to invest and deploy capital.”

Mr McNeilly said he had looked around the CBD office market over the last year or two but had struggled to find value.

“The office market is not a huge focus for us; in all likelihood we will do more retail over the next couple of years,” he said.