One of the state’s biggest building groups has enlisted expert help to deliver on the public art requirements of its latest apartment project. 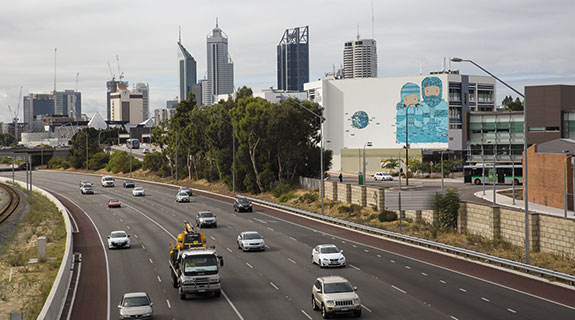 One of the state’s biggest building groups has enlisted expert help to deliver on the public art requirements of its latest apartment project.

ABN Group’s development arm has teamed up with non-profit group Form to ensure the public art requirements of its latest apartment project complement and enhance the construction.

ABN’s tie-in with Form makes it the latest in a growing list of major developers to partner with the not-for-profit cultural organisation.

ABN Development collaborated with Form to source an artist for its Fringe on William project, a 48-dwelling, six-storey building to be constructed on William Street in Mount Lawley.

Planning policies across most local government jurisdictions in Western Australia require developers to contribute 1 per cent of the project’s value in public art, a proposition ABN Group managing director Dale Alcock said was outside the skillset of the company.

“Deciding on the tone, look and appeal of public artwork takes a lot of research and a specialist knowledge, not only in art but also in understanding how it influences community, culture and advocacy, which is why we enlisted the experts from Form to help ABN Group undertake this huge task and make sure we get it right,” Mr Alcock said.

Through the consultative process with Form, prominent street artist Kyle Hughes-Odgers, aka ‘Creepy’, who has created and exhibited public art works across Australia, the US, parts of Asia, as well as London, was selected to work with ABN.

Form public art senior project manager Carolyn Karnovsky told Business News ABN Group was not alone in its endeavours, with many of the state’s largest property players interested in collaborating on public art.

Ms Karnovsky said Form was working with the Westadium consortium, led by Brookfield Multiplex to provide public art at the new Perth Stadium, while it was also collaborating with Brookfield on the second tower at Brookfield Place.

Ms Karnovsky said a lot of momentum had been created by Form’s PUBLIC exhibition, which is gearing up for its 2015 launch following the successes last year, when Perth residents and visitors were captivated by the larger-than-life artworks that appeared on prominent walls around the city.

“The sector has really grown, the base of artists here is really strong, and you can see the outcome.

“It’s really exciting to think about the projects that will be delivered over the next three to four years and how far that will go in establishing a really strong and confident Western Australian identity.”

Ms Karnovsky said developers’ approach to public art was also evolving, with many starting to consider it as an integral part of their buildings, early in the design process.

“What you used to see a lot of was artwork that was just plonked out the front of buildings,” she said.

“There is still merit in having standalone works of art, but what’s really interesting now is the artwork and that artistic process is more deeply ingrained in the building and the architecture.

“Developers are now realising they need to bring art consultants and artists into the mix much earlier on to avoid disconnected work that’s not really harmonious with the development.