Our annual Apartment Developers feature discusses the oversupply debate of apartments in Perth's inner city, the government's proposed changes to strata titles, and the next wave of demand for apartment projects. 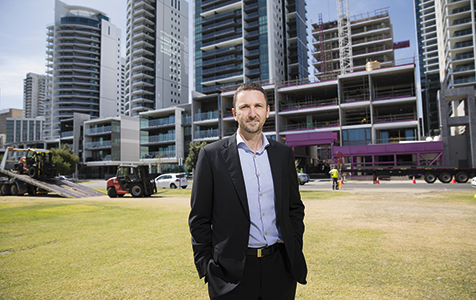 Perth’s apartment developers are hitting overdrive, but how much is too much for this capital intensive sector?

It is the debate that has polarised Perth’s property sector throughout 2014.

Prominent residential land developer Nigel Satterley caused a major stir earlier this year when he used a Business News Success & Leadership event to forecast a glut of apartments in the Perth CBD and surrounding inner-city suburbs.

Since then, apartment developers have rushed to defend their patch, saying Perth’s residential real estate market is going through a significant structural and cultural shift, brought on by the legions of interstate and international immigrants who are used to apartment living.

Part of the issue with the perception around apartments is the projects are so visible – big towers of concrete and glass being assembled swiftly by bright yellow cranes that dominate the landscape.

But as many developers and apartment sellers have pointed out, those cranes won’t get deployed on a construction site unless the project has satisfied financial institutions’ strict lending requirements – in most cases comprising presales of at least 70 per cent.

“It’s a totally different market to what it was 20 years ago from a finance perspective,” QUBE Property Group managing director Mark Hector told Business News.

“I’m not aware of anyone building speculatively, and if they are, they must have a very strong balance sheet.”

REIWA also said there were 7,511 multi-residential dwellings under construction in the metropolitan area at the end of June, suggesting the sector could be set to break new records.

Estimates of the total percentage of residential dwellings in Perth that are apartments vary, generally coming in somewhere between 15 and 17 per cent, according to Finbar Group managing director Darren Pateman.

Mr Pateman said he believed that percentage was a bit light on, especially when compared with other Australian cities.

In Sydney, 57 per cent of the dwelling stock is apartments, compared with 37 per cent in Melbourne and 41 per cent in Brisbane, Mr Pateman said.

“For a city that’s constrained by the coastline and the hills and has seen an urban sprawl mentality for quite a few decades, we’ve got a way to go with apartments,” Mr Pateman told Business News.

The underlying long-term trend in Perth, according to Blackburne Property Group managing director Paul Blackburne, was the supply of apartments fell well short of meeting current and future demand.

Mr Blackburne said only around 10 per cent of Perth’s residents lived in apartments, but in most bigger cities, that percentage was around 30 per cent due to traffic congestion and the desire to live close to employment and entertainment hubs.

The Australian Bureau of Statistics has predicted Perth’s population will grow to 5.5 million by 2061, a statistic Mr Blackburne said indicated the city needed six times more apartments over the next 20 to 30 years than it currently had.

“That’s about 1 million more apartments over the next 30 years,” he said.

“When you actually sit back and do the numbers, the percentage of the population living in apartments is going to be three times higher in 20 or 30 years.

“I look at that and say ‘that’s a lot of apartments’.

“The city is growing, and it’s not going to sprawl out – it’s going up, and that means apartments.”

Mr Blackburne said his company had around 2,000 apartments either under construction or in the marketing phase, but was cautious that Perth’s rapid apartment development might have reached the peak of the cycle.

“There will be short periods where there might be limited price growth, in rentals and values, because of the short-term lowering of demand or increased supply,” he said.

“But we expect those to be short periods of three to six months every few years over the next 10 years.”

Psaros Group managing director Danny Psaros was less optimistic, warning that around half of the vast number of approved apartment projects, which he said totalled about 9,000 apartments across the metropolitan area, wouldn’t get past the marketing phase. Mr Psaros said it was becoming increasingly important for apartment buyers to consider the track record of developers before committing to a presale contract.

“There are a lot of projects being spoken about, especially in the city area and around Leederville and West Perth,” Mr Psaros said.

“We’re convinced that they won’t all start, and that will naturally sort out the so-called oversupply.

“So while it might look like there’s an oversupply, market forces will deal with that really quickly.”

Mr Psaros’s other concern with apartments is the construction sector, which he said was operating either at or near capacity.

“There are not a lot of builders around town that can actually handle these sorts of projects,” Mr Psaros said.

“That’s the next question – who is going to build all these projects?

“It’s pretty tightly held here, if you just look at the amount of builders that build apartments, there are not many of us around, and there’s a limit to how much these guys can do.

“We’re actually seeing a labour squeeze – we’ve got enough to go around but you wouldn’t want to put a few more on.” Even with the oversupply concerns that have clouded the market for the past 12 months, international and eastern states-based development firms are starting to make their presence felt.

Late last month, real estate agency JLL reported it had brokered more than $210 million residential development site transactions in the year to date, with 50 per cent of those sales going to offshore groups.

One of those deals was Singaporean firm Fragrance Group’s July purchase of a development site at 374-396 Murray Street from Luke Saraceni’s Westbridge Property Group, for $40 million.

A $130 million proposal comprising a 32-storey, 286-apartment tower and a 12-storey office building was given DAP approval a week after the transaction was announced.

Another significant apartment development site bought by a Chinese developer, the identity of which has not been disclosed, was the former Matilda Bay Brewery in North Fremantle, which was snapped up in August for $36 million in a deal brokered by Knight Frank.

“The big challenge for developers over coming years will be in securing development sites in the right locations against a backdrop of increased competition,” Mirvac Group residential executive John Carfi said.

However, Edge Visionary Living director Gavin Hawkins welcomed the increased competition, saying it was a sign of a healthy market.

“Three or four years ago, when there was only one developer putting up units, it wasn’t a healthy market,” Mr Hawkins said.

“People now have confidence to bring projects to market and that shows a shift in mentality.”

“We want to see more people buying into apartments generally,” he said.

“That doesn’t just mean from us, obviously we would like to be, and position ourselves to be, the first ones people consider … but the more people that think apartments generally, that’s better for our business.

“You don’t have a food precinct without more than one cafe, so we like to see other people getting involved, and more people thinking apartments is better for all of the development industry.”