More than $230 million of developer-contributed funds are sitting in local government-managed bank accounts waiting to be spent, according to a new report. 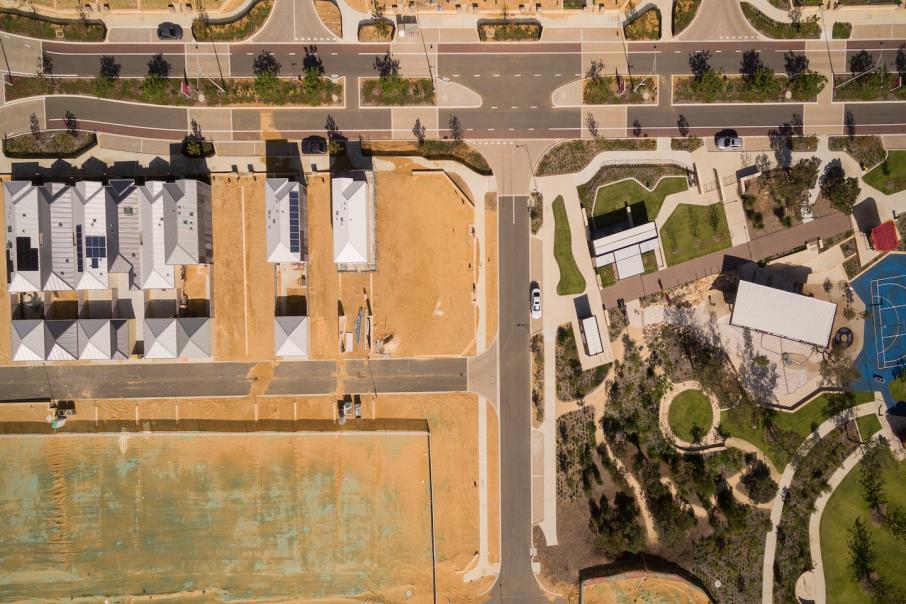 More than $230 million of developer-contributed funds for community infrastructure is sitting in local government-managed bank accounts waiting to be spent, according to a new report.

The ‘Finding the Future: Improving the Governance of Developer-Funded Infrastructure’ report was commissioned by the Urban Development Institute of Australia WA, as part of its advocacy work surrounding Developer Contribution Plans (DCPs).

DCPs were introduced as a means to fund potential infrastructure in residential estates: an agreement between local government and landowners to share the costs involved in delivery of future community amenity needs.

Those future needs include anything from roads, roundabouts and traffic signals, to footpaths, sporting fields and new community buildings like clubrooms and libraries.

DCPs are governed by State Planning Policy 3.6 – Development contributions for infrastructure (SPP 3.6), which is now under review, with UDIA WA aiming to provide an evidence-based approach to improving DCPs with the release of the report.

The report assessed 10 local governments across Perth and Peel, uncovering 54 active DCPs representing close to $2 billion worth of infrastructure items.

The report found that about 86 per cent (more than $1.7 billion) of those infrastructure items were funded by developer contributions.

Generally, those costs are passed on to homebuyers on a per-lot basis, adding between $20,000 and $30,000 on average to the price of a lot, those funds held by local governments until the infrastructure items are delivered.

UDIA WA chief executive Tanya Steinbeck said there were a number of challenges relating to the management and execution of DCPs.

An unclear delivery timeline was one of the biggest issues, she said.

While the report found $542 million worth of expenditure had already occurred under those 54 DCPs, it identified that more than $230 million was just sitting in DCP accounts.

Of those unspent funds, the report highlighted how two DCPs, more than 15 years old, had been holding more than $20 million.

Several other DCPs, established 10-15 years ago, were sitting on anywhere between $12 million and $20 million. 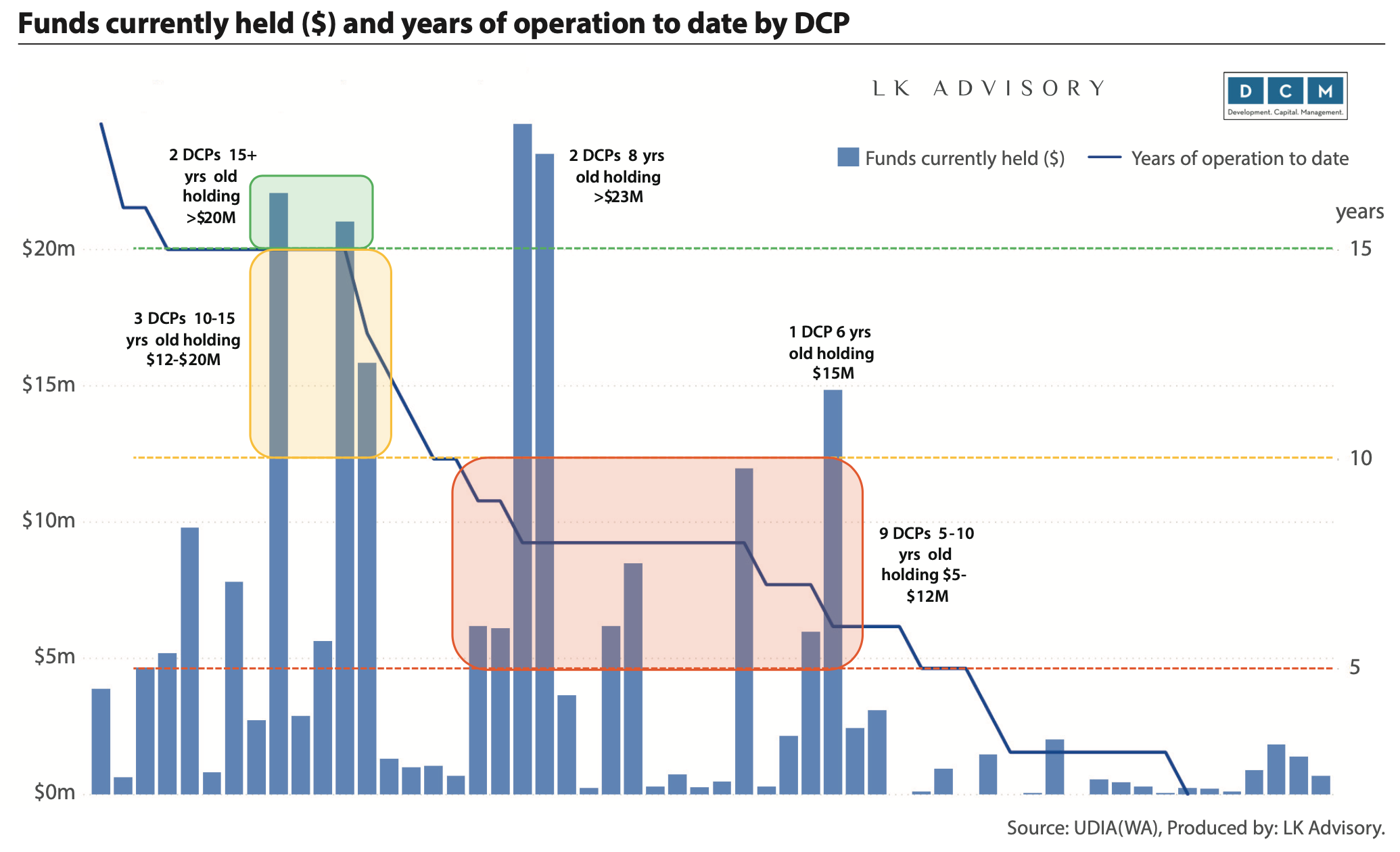 Ms Steinbeck said those idle funds provided an additional means to fast-track projects to stimulate jobs and the local economy in the COVID-19 environment.

“There are inconsistencies [between local governments] on how they’re applying the funds and to which pieces of infrastructure, because there’s no real solid planning for the delivery of it all.

“That’s what causes the frustration from developers, but equally the consumers who buy into these estates with committed infrastructure.

“It’s not just impacting the development industry; it’s impacting homebuyers who never get what they were promised. It touches so many different parts of the community.”

While the report noted the principles of SPP 3.6 were ‘excellent’, the detail and guidance for local governments on how to manage and execute DCPs, it found, had inhibited its efficacy.

“In some instances, we’ve been a mediator between local government authorities and landowners ... which highlights another hole in the current policy; there is no mediator or umpire you can go to, to effectively have these roadblocks resolved,” Ms Steinbeck said.

Mr Kosova said one of the main challenges he faced in collating the report was the lack of standardisation in DCP reporting.

“There needs to be a best-practice guide established in partnership with local government to say, ‘This is the best way to administer these arrangements’,” he said.

“The current arrangement is ad hoc at best.”

Mr Kosova said the bigger dilemma was that, over the next decade, an extra $880 million worth of contributions needed to be collected from developments within only 10 local governments to make up that near-$2 billion worth of proposed items across those 54 active DCPs.

“These systems and processes have evolved through different local governments and different contribution regimes. As a con- sequence, there’s been no real consistency,” he said.

“You have contribution arrangements either dramatically over-collecting or under-collecting, so then who picks up the bill?”

Ms Steinbeck said a mismatch of local government skill sets, the complex nature of DCPs, along with land fragmentation and approvals sought from various state government agencies, were some factors local governments cited as hindering DCPs.

But it wasn’t all bad news; the City of Cockburn was one local government with a positive DCP reputation.

City of Cockburn planning and development services director Daniel Arndt said that was largely due to its transparent approach and the team’s planning, financial and project management skills.

That included concerns over the proposed financial and project management risks, and impact associated with the inclusion of state infrastructure, he said.

Mr Cordina said delays created uncertainty over when or if infrastructure would be delivered, making it difficult to market future amenities to prospective homebuyers.

Part of the draft SPP 3.6 aims to set hard and fast deadlines for DCP delivery.

“If you can’t deliver something in 10 years, the likelihood of the person who paid for it still being there starts to diminish significantly,” Mr Cordina said.

“There are areas where more than $30,000 per lot have been collected 20 or 30 years ago; many of those homebuyers have moved on.”

Mr Cordina hopes part of the revised policy for DCPs will also address the types of infrastructure items delivered, with a focus on essential items.

Regional infrastructure such as libraries and swimming pools, he believed, should be paid for by the entire local government area, or multiple municipalities, as they benefited the broader community.

Nigel Satterley, one of the state’s most prominent land developers, holds a similar view, pointing to sporting fields as one type of community infrastructure that could be supported by state and federal funding.

Satterley Property Group has developed more than 170 residential estates across Western Australia, Queensland and Melbourne, since it was established more than 40 years ago.

“The model is not broken, it’s how it’s executed and how it’s managed, that’s the problem,” Mr Satterley told Business News.

“There have been cases where council has decided they’re going to do something else without any consultation ... it needs more openness and transparency.”

The introduction of frequent auditing, he said, could facilitate more flexibility around the value of committed funds under DCPs to better reflect the fluctuating costs associated with delivering infrastructure.

“They’re collectively holding nearly a quarter of a billion dollars now; there should be a lot more oversight,” Mr Satterley said.

“If it’s administered and done correctly, this is another big job creator, a big multiplier.

“What they need is an agency that sits off the planning department, like they have in Victoria.”

Following the report findings, the establishment of an independent body to provide governance oversight and/or administration of DCPs is among 10 recommendations put forward by UDIA WA.

That recommendation would involve the Western Australian Planning Commission (WAPC) playing more of a role in overseeing the management of DCPs.

In Victoria, the state government, via the Victorian Planning Authority, prepares the majority of DCPs across the state.

However, WALGA said a recent audit revealed the shift to state-based mechanisms in Victoria (implemented in 2015) had actually led to reduced interest in addressing DCP deficiencies.

The audit found aspects of DCPs were still managed in isolation, with overlapping roles and no overarching strategy or plan to measure success.

Responding to enquiries by Business News, WALGA president Tracey Roberts said each individual DCP in WA was already endorsed by WAPC before being implemented.

“There are strict requirements around negotiating and spending the funds gathered under these plans to ensure they are only spent on their intended purpose, and mechanisms exist to ensure that any unspent funds are returned to proponents,” Ms Roberts said.

“The current review of state planning policy has been under way for many years and the sector is keen to see it finalised.”

A Department of Planning, Lands and Heritage spokesperson told Business News a new SPP 3.6 would be available in the coming months, with some final work being undertaken to prepare for the rollout and implementation of the new policy prior to release.

The spokesperson said the revised policy focused on improving transparency and consistency in how developer contributions were calculated and administered.

Additional UDIA WA recommendations targeting transparency and consistency include the implementation of; mandatory requirements on the publishing of DCP information; standards for financial modelling and economic impact; and better resourcing of DCP management, including a process for arbitration and appeal in the case of disagreements.

Ms Steinbeck hopes the report’s insights can help all stakeholders work together to improve DCPs.

“We want to move forward in a constructive and collaborative way, rather than it be a hostile local government versus development industry; that’s never got us anywhere and never will,” she said.