A long-vacant plot at Albany's Middleton Beach has returned to market, with the state government seeking a developer for the former Esplanade Hotel development site it purchased late last year for $7 million. 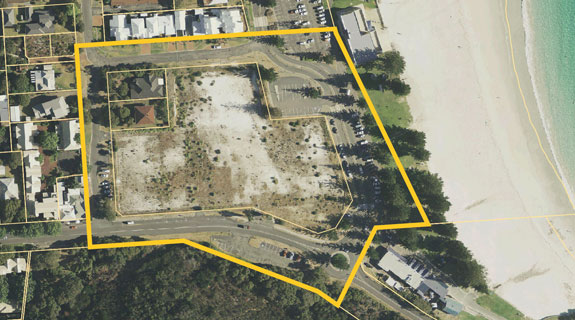 An aerial shot of the vacant Esplanade Hotel site.

A long-vacant plot at Albany's Middleton Beach has returned to market, with the state government seeking a developer for the former Esplanade Hotel development site it purchased late last year for $7 million.

“This is one of those rare opportunities for developers to invest in a true beachfront project that will be transformational for the community and tourism for the Great Southern region,” Mr Redman said.

Mr Redman said LandCorp had been working closely with the City of Albany, Great Southern Development Commission, government departments, Albany Chamber of Commerce and the community to plan the redevelopment of the site.

“As a result of this feedback a preferred development concept plan is being created, which aims to align community expectation with the needs of private developers,” he said.

“Now we want to hear from developers to gauge their interest and to garner any further input to help inform the structure plan for the site.”

The state government bought the plot in November, with the purchase partly funded with $3.3 million from the Royalties for Regions program.

The Esplanade Hotel that was formerly on the plot was demolished in 2007.

A 2010 campaign to sell the site, which had a price tag of $15 million, was unsuccessful.

The former owners of the site, Singapore’s CS Partners, had planned a $70 million, five-star hotel, but were not able to make it stack up financially.

Community consultation by LandCorp revealed strong support for redeveloping the site, with locals considering it unatractive and an eyesore.

A LandCorp survey showed nine in 10 respondents supported tourist accommodation at the site, while locals were not in support of offices, multi-storey apartments or townhouses.