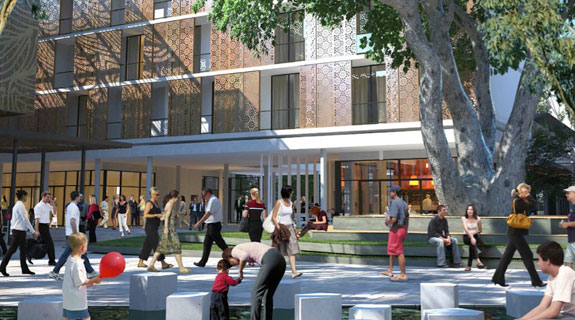 An artist's impression of the front courtyard for the Karratha DoubleTree by Hilton.

The long-running saga of a $70 million DoubleTree by Hilton hotel in Karratha appears to have come to a close, with LandCorp terminating an exclusive working period with the developer behind the proposal.

Lands Minister Terry Redman admitted in state Parliament this week that LandCorp was back to square one on the 144-room project, and the agreement with developer Ramtron Australia had been cancelled.

Mr Redman said there was no set construction timeframe for the hotel, while its branding was also now up in the air until a new proponent was identified.

Construction on the project had first been scheduled to begin in late 2012, before Ramtron switched the location of the hotel to the Karratha Quarter town centre development, from an alternative site.

At the new site, construction was expected to kick off midway through this year, but depressed economic conditions in the Pilbara meant financing was difficult to stack up for Ramtron.

The hotel was flagged to be built using a modular construction method devised by Chinese conglomerate CIMC Modular Building Systems, which would also provide the funds for its construction.

But Business News understands the big issue holding back the long-awaited project was its valuation – with the project simply not viable for the financiers in current economic conditions.

Ramtron was initially selected as the preferred proponent for the hotel in June 2012, following an expressions of interest process that produced bids from experienced hotel operators, including the highly-experienced WA-based Prendiville Group.

Mr Redman backed the selection of Ramtron in Parliament, saying he had confidence in LandCorp’s processes of choosing a preferred proponent.

Opposition spokesperson for Lands Ben Wyatt questioned why Ramtron had been selected despite the company having been associated with hotel proposals in Margaret River, Cape Leeuwin, Ningaloo and Beaufort Street, none of which were ever built.

Mr Redman said he couldn’t comment on the detail of the process LandCorp went through to select Ramtron, only saying it was the government agency’s core business.