Architect-design firm shows the value of a well-planned restoration in the heart of the city. 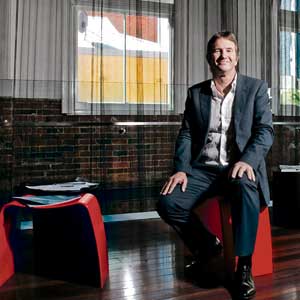 ARCHITECTURE and design firm Cox Howlett & Bailey Woodland has transformed its new city office building back to its former glory, albeit with a contemporary twist.

Built in 1910, the building at 360 Murray Street, has at various times been a farm machinery showroom and army surplus store, and is considered to be of heritage significance.

The site is just around the corner from Cox Howlett & Bailey Woodland's old home at 61 King Street, and underwent a six-month multi-million dollar renovation and fit-out.

The design team has peeled back the remnants of the building's past uses to reveal the original fabric of the two-level heritage building.

Director Steve Woodland said the fit-out illustrated that a highly contemporary workspace could be delivered within a heritage structure.

"Once you start peeling back you find interesting things like brickwork, roof trusses. It's very refreshing," Mr Woodland said.

"The notion of being able to use old built fabric and deliver a contemporary work environment, there's a lot to buildings in the city that could apply to, enabling small business like us to do that. We were very conscious of staying in the city, it's important to us and our clients."

For the interior, the firm has opted for an open plan, 'office-on-wheels' concept, with all workstations moveable throughout the office.

The fit-out also maximises interaction between the staff and with the firm's clients.

With only two small meeting rooms, as well as a larger presentation room separated from the studio by a retractable divider, most of the interaction happens within the studio space.

Various break-out areas, some separated by mesh, semi-transparent curtains, provide some privacy while still remaining engaged with the rest of the studio.

"Clients come in and are immediately in the studios, and they have a sense of what we do and how we do it," Mr Woodland said.

Inherent in the building is the large volume of space, particularly evident from the front-of-house lobby area.

The large front windows, most of which had been boarded up, have been restored to the original form, providing an open view to the street.

This art gallery feel was intentional, with the firm looking to feature a revolving collection of artwork and furniture in the space.

But most importantly, the new space promotes a team-oriented, creative workplace, encouraging open communication between all staff - a change that is already becoming noticeable, according to Mr Woodland.

"At the end of the day, there's a sense of the esprit de corps; when you get the space right people can be collegiate and there's positivity in the work environment," he said.