SPECIAL REPORT: Slower growth in discretionary spending is a challenge for some local fashion hopefuls, but export markets and tech-style accelerator programs are presenting opportunities. 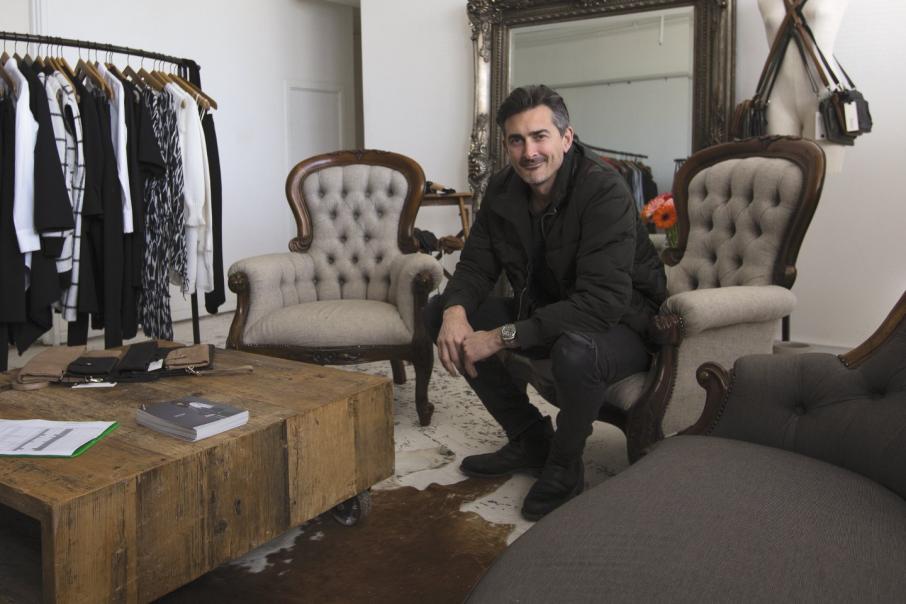 SIZING UP: Richard Poulson says Morrison has grown its retail presence during the past year. Photos: Attila Csaszar

Slower growth in discretionary spending is a challenge for some local fashion hopefuls, but export markets and tech-style accelerator programs are presenting opportunities.

Some big-name Western Australian designers are expanding their local retail presence, despite the prevailing view that consumers’ discretionary spend is in decline as the state’s economy splutters along.

And while Asia is always in the frame for those targeting opportunities offshore, more recent success has been achieved in the traditional US market.

There have been changes and a renewed focus at Fashion Council WA as well, with board renewal including some high-profile opportunities.

Meanwhile, the council’s fashion accelerator, Hatch, has been relaunched, with 25 local designers displayed at Karrinyup Shopping Centre in a store that will pop up in other locations.

The latest retail sales data from the Australian Bureau of Statistics shows department store spending in WA is down 8 per cent in the 12 months to the end of July, while expenditure on clothing, footwear and personal accessories was about 2.4 per cent higher.

Despite these tepid results and the sluggish economic conditions, several prominent designers had made market gains.

It has joined Ellery as one of two Perth brands stocked at the chain.

Also towards the end of 2015, Costarella’s new flagship store opened in the State Buildings.

North Fremantle-based Flannel is one of a number of designers having success in the North American market.

Managing director John Lawrence said the brand had broken into some big North American retail outlets, which would be supported by deals with a selection of high-end boutiques.

Flannel has also opened two retail stores on Australia’s east coast, with another two to open in the coming weeks.

One of the few ASX-listed Perth companies with a fashion focus is Atlas Pearls and Perfumes, which recently announced a net profit of $970,000 for the 2016 financial year.

That followed an $8 million loss in 2015, and was driven by a big increase in revenue.

Fashion was usually the first to take a hit when discretionary spending was reduced, she said, with consumer confidence lower.

At least two popular east coast-based labels have failed in the past 12 months – Seduce and Willow.

WA designer of the year Morrison has opened eight new stores during the past year, including a deal with department chain Myer that provides the label with in-store space at three locations.

Morrison co-founder Richard Poulson said the designer would have 18 retail locations when its latest opened in Sydney in November, with the company pursuing expansion despite the economic climate.

“It is a tough market out there,” Poulson told Business News.

“I certainly think you have to fight harder for your dollar these days, but as long as you’re consistent with your offer and stay true to your customer, you can maintain your normal (sales).

“In terms of operating in a tough economic (climate), we took a longer-term view and felt it was the right time for us to be moving forward with some of the growth opportunities available to us.”

It was not just an issue in WA, he said, with low consumer confidence a weight on many markets internationally.

“That’s why it is so important to maintain consistency with your customers … (and) provide something that’s unique and different and has its own personal DNA,” Mr Poulson said.

Morrison additionally wholesales to about 80 smaller boutique retailers, although Mr Poulson said that market was somewhat stagnant, with his focus more on the retail operation.

“We’re not putting our growth energy into growing our wholesale business ... but we’re certainly looking after the clients we do have,” he said.

The label’s growth has been entirely organic and self-funded, however, there was a level of caution about expanding into overseas markets such as Asia.

“We haven’t taken onboard any external funding from equity investors at any point in the last 16 years,” Mr Poulson said.

“We’ve still got more work to do in Australia; this is our market and we know it.

“We’ll maintain our conservatism in terms of a retail expansion outside Australia and concentrate on what we know.”

Similar to the approach applied to technology startups, Fashion Council WA has developed an accelerator program.

Its Hatch Accelerator works as a retail outlet to generate sales and brand recognition for local designers, with 25 labels currently on display at its store in the Karrinyup Shopping Centre.

Among the 25 labels are House of Skye, Steph Audino, and Sab 55.

It is the program’s second year and, in time, the store will move to several other locations, including Garden City Booragoon.

Then there will be pop-up operations interstate.

Hatch is backed by AMP Capital, which owns the Karrinyup centre, and the state government through the Department of Culture and the Arts.

That’s important, she said, because the people who often led fashion startups had great creative skills but minimal business experience.

Programs such as Hatch aimed to offer an outlet that nurtured and mentored budding labels, with direct feedback from customers, branding support and public relations assistance, she said.

Then there’s the added benefit of boosting cash flow and providing a steady revenue stream.

Ms Harvey-Hanrahan said that would ultimately prepare designers for bigger contracts with retailers.

An additional benefit was that it would introduce consumers to local brands, she said, with many WA shoppers keen to buy local (yet unfamiliar with the options).

Retailers like H&M and Topshop have moved into Perth in recent years, in a trend known as ‘fast fashion’.

It is difficult for local designers to compete on price on that front.

In a theme that was broadly confirmed by many designers contacted by Business News, Ms Harvey-Hanrahan said the strategy for local brands would be to do something different, with a more bespoke focus.

There was room in the market for both fast fashion and bespoke local designs, she said, with well-made local brands generally very successful.

One designer with a collection displayed at Hatch is Megan Salmon, who has significant industry experience.

Her clothes had traditionally targeted an audience of successful women 40 and over, usually with higher incomes.

Ms Salmon said the Hatch program would present an opportunity to target new demographics and tap into a younger market.

She said she was still building her label, with a loyal fan base in Perth underpinned by a retail store in Fremantle.

Victoria was Ms Salmon’s key Australian market, although she was having increasing success in New Zealand.

That was bolstered in the past year by a series of new accounts at big boutique chains in NZ.

Another label on display at Hatch is Kirrikin, which produces scarves, bow ties, and other accessories with an indigenous artwork-inspired colour print.

The company works with members of a remote indigenous community to design the prints.

Founder and director Amanda Healy said she had secured support from the US National Football League television channel, which used the pocket squares in their on-air attire  from November last year.

“(This year) we have signed up the Art Gallery of Queensland, Yubu Napa in the Northern Territory, the Aboriginal Art Gallery at Kings Park, Pantoufle, Subiaco and Voyages at Ayres Rock,” Ms Healy said.

She hoped to secure more deals on the east coast.

In the interim, Hatch would encourage awareness of the brand.

“Our aim is to make people aware that it exists, and the remarkable stories of the artists involved,” Ms Healy said.

Stylist Ivanna Fontana is another making inroads into the US market.

Ms Fontana said Los Angeles style was similar to what was on offer in Perth and Sydney, while the US as a whole represented a bigger market.

Earlier this year, Ms Fontana and a business partner launched the Fashion Down Under LA event in Los Angeles to give Australian designers a toehold in North America.

It was supported by the local Australian consulate, which hosted the event.

“Our main goal with the event is to introduce the designers into the US,” Ms Fontana told Business News.

“We’re a platform for them to have that introduction.

“There’s a bigger range of opportunities there with a wider range of consumers and buyers.”

“With designers trying to keep afloat here in Australia, it is a little bit of a challenge,” Ms Fontana said.

“(However) buyers over in the US are really interested to see what Australian fashion is going out to them.”

Offerings would need to be tweaked for that market, however, with a particular focus on price point and trans-seasonal collections, to take account of the Northern Hemisphere seasons.

Two contemporary examples of WA brand moves in the US were Steph Audino, which launched a recent collection there, and Natalie Rolt, which will be at the upcoming New York fashion week.

“Particularly California, and the US in general, they’re really loving Australian fashion at the moment,” Mr Bauer said.

“As far as Australian standards go, there is a slight downturn for sure.

“We’re growing internationally so it doesn’t really affect us too much.

“All in all we’ve got a lot of growth internationally.

“Mainly, the US is the biggest growth were having at the moment.

“We’re predominantly online to be honest, (and) that sector is really growing a lot.”

There have been a series of changes to the board of Fashion Council WA this year, with three high-profile Western Australians joining in recent weeks.

That follows the exit of executive director Danicia Quinlan in December last year, while former UWA Business School dean Tracey Horton and former Water Corporation chairman Tim Ungar stepped down at the end of their terms.

Both Fashion Council and Perth Fashion Festival have some impressive firepower among the board members they’ve been able to recruit.

One new board addition to Fashion Council is Stantons International managing director Martin Michalik, who is a chartered accountant with experience in audits of listed companies and not for profits.

Ms Tannock has roles on a couple of other boards, including high school Trinity College in East Perth and the advisory board for research institute the Centre for the Built Environment and Health.

She’s previously worked for the Commonwealth Director of Prosecutions and has lectured on property law at the University of Notre Dame.

Ms Katsambanis is a senior media trainer at Corporate Media Services, and writes as a columnist for Fairfax.

She said she hoped the role would enable her to help celebrate and nurture WA’s fashion industry.

There is a range of other high-profile names connected to the festival and the council.

Perth Lord Mayor Lisa Scaffidi is a director of Fashion Council, as is Morrison’s Mr Poulson.

Hawaiian executive director Kate O’Hara serves on the board and is acting chair.

He’s on the board of Celebrate WA and the Barking Gecko Theatre Company.

Perth Fashion Festival has a link to the resources industry, with Cape Lambert executive chairman Tony Sage owning a slice of that entity.

Mr Sage is the owner of Perth Glory.

The festival has an advisory board featuring property developer Sam Barnett, son of Premier Colin Barnett, and state member for the electorate of Perth, Eleni Evangel.

UWA Business School alumni relations manager Marie Claire Bennetts is also a member of that board.