A new desalination plant and a rebuild of the Goldfields water pipeline are among the Water Corporation’s major proposals. 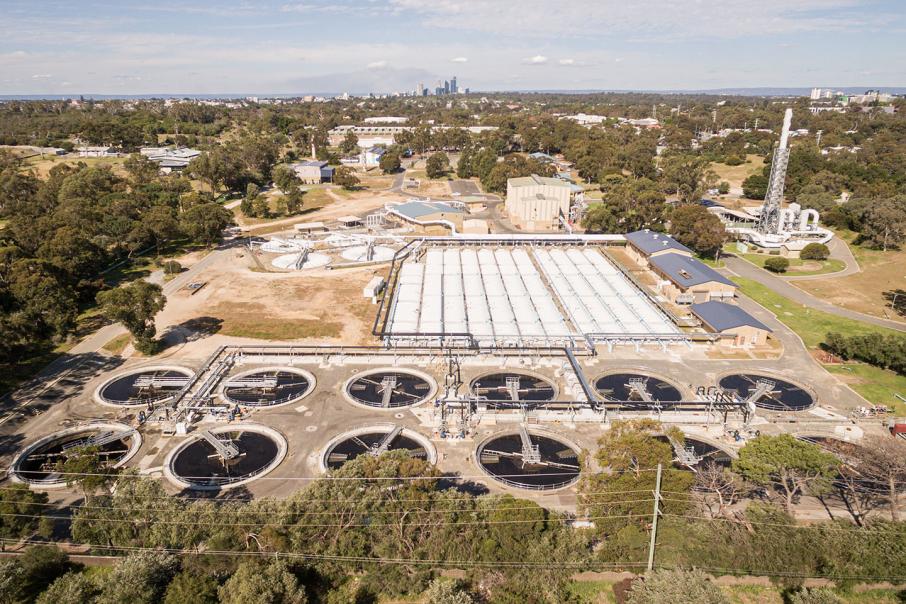 The Subiaco Wastewater Treatment Plant is one of the Water Corporation’s $37 billion of assets. Photo: Gabriel Oliveira

There is no clear timeframe for construction of a third desalination plant to supply Perth, but planning is under way to bring up to 100 billion litres of new capacity online.

The Water Corporation has a long-term strategy to bring that new capacity into the Integrated Water Supply Scheme, which covers Perth and parts of the South West, Goldfields and Agricultural regions, by 2030.

It would be in addition to around 370 billion litres, or 370 gigalitres, of water currently pumped annually.

Desalination is one option available to the Water Corporation to bring on new supply.

Proposals for two possible new desalination plant locations were lodged with the Environmental Protection Authority by Water Corporation in the past year.

Those preferred sites were at Kwinana and at Alkimos, which were chosen from a group of 12 potential locations.

Only one site is to be chosen.

Water Corporation spokesperson Claire Lugar said feasibility work had started in 2017, although it was unclear when a decision would be made.

“We are progressing approvals for the two potential desalination plant locations, and will continue to undertake planning activities for these projects until such time that we require a new desalination source,” Ms Lugar told Business News.

“At this stage there is no firm timeframe for building a new desalination plant.

“The timing depends on annual rainfall and how fast our climate continues to dry; how much water we use, population growth, and economic evaluation of options.”

The projected cost of a new plant is also unclear.

The most recent investment was a $450 million expansion of the Southern Seawater Desalination Plant at Binningup, completed in 2013, which doubled capacity of that facility to 100GL.

But a 2014 state government release cited a $250 million figure for a third facility.

Beyond the Perth region, desalination plants have previously been flagged for Esperance, near Collie, and on the Burrup Peninsula.

The intention is to reduce salinity in Wellington Dam by diverting about 14GL of water annually, with the fresh water to be used for agricultural purposes.

About $175 million of funding has been committed in total by the state and federal governments for the project, while the business case lodged to Infrastructure Australia forecasts capital costs of about $400 million.

Funding for a Water Corporation desalination plant has not yet been earmarked, however.

Aside from desalination, Water Corporation said it would also be working to reduce demand growth and source other supply options, including groundwater replenishment.

Almost $300 million was to be spent on groundwater replenishment in the four years to June 2023, according to the corporation’s most recent budget.

That figure would be part of a total $2.7 billion of planned capital investment in the period.

Nonetheless, utilities are creating some work for contractors.

A contract to expand a groundwater replenishment plant near Craigie was awarded to Clough and Suez Water in late 2017, with the partners also on the shortlist for the Myalup-Wellington Dam treatment project.

Other contractors on a separate shortlist for an associated pipeline network linked to the dam included Georgiou and Ertech.

Engineering company GHD is advising on two potential desalination projects, while other contractors are said to be actively pursuing water work.

A further big investment looming is a rebuild of the Goldfields Water Supply Scheme, considered one of Western Australia’s most notable engineering feats.

The 530-kilometre pipeline was commissioned in 1896 and completed in 1903, delivering potable water from Mundaring Weir to Kalgoorlie and the Eastern Goldfields.

Early planning documents have been released for a major rebuild of the pipeline, but the work is expected to progress slowly.

“Work to upgrade the pipe will happen progressively over the next 50 years and sections will be prioritised for replacement according to need,” Ms Lugar said.

“Our construction program is based on a five-year outlook and the replacement is determined by the age and condition of the pipeline.

“At this stage, we plan to replace approximately eight to 10 kilometres of pipeline per year at various locations over the length of the pipeline.”