Having had its influence eroded at this year’s state poll and now their dynamic leader, Brendon Grylls, the Nationals face a tough road to stay competitive. 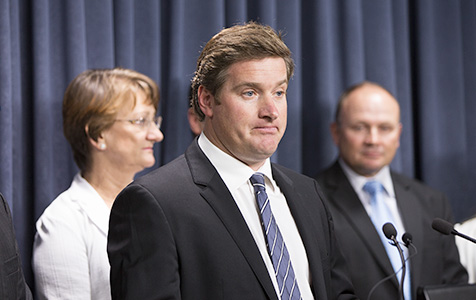 DEALMAKER: Brendon Grylls was the kingmaker following the 2008 state election.

Brendon Grylls’ surprise decision to quit the National Party’s leadership and the cabinet has destabilised not only his party, it has also robbed the cabinet of one of its most competent ministers of the past five years.

The obvious question for Mr Grylls now is what this will mean for his political career. He says he intends to run again at the next election, due in 2017, but that is a stock political answer.

He also says it is his intention to shift his family to the Pilbara, which he now represents, but that will be resolved closer to the next poll. It’s a strange move, especially following his decision to quit the Central Wheatbelt seat to contest Pilbara at this year’s poll. At that time, Mr Grylls said he would not be living in the electorate, despite the risk it could cost him votes.

But there are two things you can say about Mr Grylls – he is impatient, and is prepared to take risks. His impatience was illustrated by his decision to wrest his party’s leadership from Max Trenorden in June 2005 after less than four years in the parliament. He was aged 32.

And, when most political pundits were preparing to deliver the last rites for the Nationals, he and party president Wendy Duncan came up with the brilliant Royalties for Regions strategy. They campaigned tirelessly, and this year the party won a combined total of 12 seats in both houses – its best result in years.

And while the Liberal and Labor parties had treated the royalties plan with contempt during the 2008 campaign, both parties grovelled for the Nationals’ hand in coalition when it was apparent Mr Grylls and his team would hold the balance of power in a hung parliament.

Sadly for Mr Grylls, his party’s bargaining position was significantly eroded at this year’s poll when the Liberals won 31 of the 59 seats. That result meant Colin Barnett didn’t need the Nationals to form government, although it was agreed to continue with the alliance that had worked well in the first term.

The loss of bargaining power with its senior partner led to increasing inroads into the royalties scheme. More money was allocated to mainstream projects, not just to top-up spending in regional Western Australia.

Casual corridor comments at Parliament House after the election have been that Mr Grylls seemed ‘less focussed’ than previously.

Now he has opted for the backbench. One theory is that he may eventually jump ship and join the Liberals, emulating former Nationals ministers Peter Jones and Dick Old in the early 1980s.

But I can’t see the Grylls family moving to the Pilbara in 2017. If the personal challenges are no longer there, he might quit altogether.

Should that happen, WA politics would be the loser.

Governor-General Quentin Bryce did more than just give support for gay marriage and an Australian republic a nudge in her recent Boyer Lecture series for the ABC.

She also gave a glimpse of how a directly elected president might be tempted to influence events, should Australians prefer that method for choosing the head of state in a republic.

For the record, Ms Bryce’s actual words seemed mild enough. Without actually mentioning gay marriage, she hoped Australia would develop into a nation where “people are free to love and marry whom they choose”.

And without mentioning ‘republic’, she added: “And where perhaps, my friends, one day, one young girl or boy may even grow up to be our nation’s first head of state”.

Both stances are at odds with those of Prime Minister Tony Abbott, who said the governor-general had expressed a personal view with “grace and style”. What he might have said behind closed doors is probably unprintable.

The key point is that vice-regal representatives tread a fine line. When one of WA’s finest jurists, Sir Francis Burt, was appointed governor in 1990, he said his decisions would be based on advice from the government of the day.

The governor-general’s and governor’s speeches at the opening of parliament are prepared for them by the government.

Ms Bryce’s comments are significant because most voters support an Australian as head of state. But the country is split on whether the current GG’s role should be renamed ‘president’, effectively leaving the appointment to politicians, or having it decided by a direct election.

A popularly elected president would have more clout, and might even be inclined at times to challenge the prime minister and government of the day.

That is what Ms Bryce has done. Supporters of a republic and gay marriage applauded, but they mightn’t be so pleased should a conservative head of state speak out against the actions of a Labor prime minister.

Ms Bryce has provided a glimpse of what could happen with a directly elected president. Australians must decide if that's what they want.