A lack of vision from Perth planners of decades past has hamstrung efforts to get the most out of Perth’s rail system. 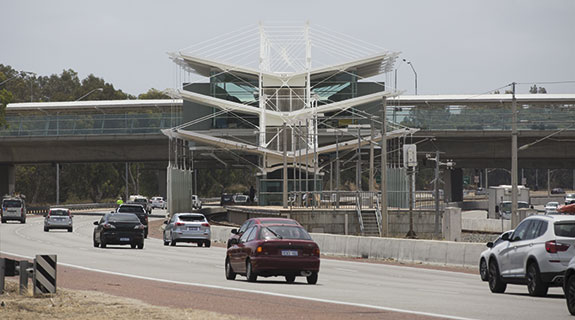 ISOLATED: The stations are visually interesting, but there isn’t enough provision for quality housing near the transport hubs along the freeway. Photo: Attila Csaszar

A lack of vision from Perth planners of decades past has hamstrung efforts to get the most out of Perth’s rail system.

I was living overseas when the railway line to Joondalup was completed in 1993, and I still remember the first time I drove from Perth up the freeway when I returned a few years later.

The train stations that had been developed were architecturally interesting as we raced past them at 100 kilometres an hour, a speed more regularly achieved on the freeway then, than today.

Having lived in Europe, however, I was also struck by the isolation of these stations. I thought they looked starkly alone, well removed from where the people who used them lived.

My first thought was to wonder when they would build high-rise apartments on the adjoining land, an obvious and necessary use, surely?

No doubt the planners of the 1950s – when the modern Perth metropolitan Stephenson-Hepburn blueprint was devised – had assumed a transport corridor would cater mainly for road users. For many decades it served sprawling Perth well, as the city grew along the northern beaches.

But that suburban dream does not work as well when it comes to public transport, which, as my experience in Europe told me, needed density near routes to work efficiently for both the state and the customers.

So it was pleasing last week to hear the state government is planning to sell sites worth a combined $20 million close to railway stations.

Generally, from looking at the state’s documentation in www.tenders.wa.gov.au, it has really sought to offer something very close to stations in most cases.

The best, in terms of proximity to stations and size, among the seven sites on offer are on the metropolitan periphery adjacent newer train stations such as Butler on the Joondalup line or Wellard on the Mandurah line, and Gosnells and Armadale on the much older Armadale Line.

No big surprises there. Some blocks in older, more developed areas such as East Perth and Midland are a fair walk from the railway. A couple of those hardly amount to transit-oriented development sites in my opinion; from a rail point of view at least, but they are surplus land in the inner city.

But this does little bring to people nearer to stations like Glendalough and many of its cousins to the north or south.

In some ways, the railway planners’ efforts to plant stations near existing suburban houses 20-30 years ago may well have been a little self-defeating. A sprinkling of houses near Glendalough might have seemed obvious back in the late 1980s, but it’s today’s homeowners who cause developers and planners most frustration, because they tend to oppose more density.

Of course, we have seen some development near places such as Leederville and Burswood/Rivervale, which are very inner city; but looking along the freeway, there are many places where suitable tracts of undeveloped or  industrial land could have been redeveloped into high-density living. Thankfully the plans around Canning Bridge look like they will take advantage of considerable space and amenity

The best examples are Wellard in the south or Butler in the north, which were planned much later with transit-oriented development in mind and have some density planned around the station.

In fact, the WA government was crowing last week about more outstanding sales at the Mandurah rail line’s first walkable transit-aligned development – The Village at Wellard, a joint venture between Peet and the state. Conceived more than a decade ago, about two thirds of the 3,000 lots on the development have been sold.

It’s just a pity that the lack of foresight (in an era when planners ought to have known better) has left us with a rail system that can’t be as efficiently used for public transport as it might otherwise have been.

I felt compelled to follow up on my thoughts about innovation investment last week.

One interesting connection was McRae Investments, which has been tentatively placed on our fund managers list, along with other private or family wealth funds that have employed professional management.

McRae was the holding company of the Clough family when it listed its eponymous engineering business, which built, among other things, the original Narrows Bridge. The family eventually sold its dominant share to South African firm Murry & Roberts, but that process took several years. Here’s how I remember it.

Clough initially sold 14 per cent for $40 million to Murray & Roberts in 2004 and then sold down its controlling stake for $30 million in 2005. In 2007, in four different transactions worth a cumulative $64.6 million, McRae completely sold out of Clough except for a minor holding.

More than $130 million around 10 years ago is, of course, only part of the story. There would have been a sizeable sell-down when the business floated on the ASX in the 1990s and, presumably, many other dividends taken along the way.

While Clough might be remembered for building the Narrows, the business was very much a resources-focused one with engineering and construction here and overseas in fields such as pipelines and other infrastructure.

It is intriguing to look at McRae’s investments today. While it hard to gauge their success, it includes medical research in hearing and dementia, technology to reduce maintenance costs in the resources sector, and even areas as mundane as urban waste management.

I reckon it’s great that wealth made from servicing resources can be channelled into such fields of endeavour. Speaking of which, having mentioned Mineral Resources’ in-house innovation last week, I was intrigued to learn the ASX-listed resources group had become a sizeable shareholder in Hazer Group’s IPO.

The Hazer technology, derived from research at The University Of Western Australia originally funded by the federal government and Wesfarmers, has a resources bent but is really just an industrial process that can be applied anywhere. Smart thinking.