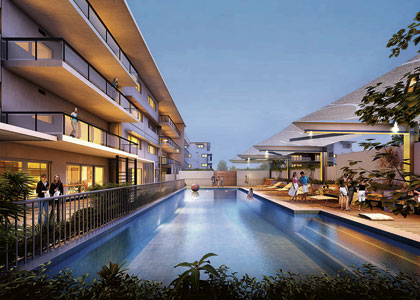 UP: Jaxon’s $60m apartment complex under development in Baynton.

Growing demand for quality apartments and resort-style living in Karratha is providing an increasingly lucrative niche for property developers and investors.

The new developments contrast with both the large workers’ camps and suburban subdivisions, which dominate the Pilbara town.

Two of Karratha’s hotels have been sold to developers planning to expand in order to provide the resources sector with additional accommodation.

And builder Jaxon has a new apartment-style complex on the way and the first stage of Finbar’s high-rise apartments is nearing completion.

Jaxon has revealed it will begin construction next month on an 82-apartment complex.

The $60 million project, being built over five buildings and four levels in the suburb of Baynton, is being funded by a private investor.

Jaxon business development manager Mark Kepplinger told WA Business News the mix of one, two, three and four-bedroom apartments would likely be of interest to resources companies, which were trying to attract workers, and would be offered either for sale or lease.

“One of the challenges that resources companies have is they all pay big dollars and look after their employees but what differentiates them is the level of accommodation. If you can provide better accommodation than your competitors then that gives you an advantage,” Mr Kepplinger said.

He said traditional older-style housing, which had been refurbished, was simply not of the high-quality level being demanded by resources companies.

NLV Group acquired Velocity Villages earlier this year in an effort to broaden its focus, which had historically been on affordable housing for the ageing population, to include resources sector accommodation.

As a result of the acquisition, the group now runs the resource-focused 92-unit Velocity Village development in Karratha, as well as Warambie Estate, an accommodation village for local service workers funded through the state government’s Royalties for Regions fund.

NLV Group chief executive Mike Hollett said expansion of the King Way Motel would provide both short and long-term accommodation for fly-in fly-out (FIFO) workers, which made up the bulk of customers filling the existing 47 rooms.

An additional function centre and a swimming pool would be included in the development and the bistro will be expanded to cater to a further 200 people – all to be completed by the end of 2012.

Project funding was provided by Malaysian private equity shareholder, Navis Investments, which Mr Hollett said was happy with the direction NLV Group was taking in the Pilbara.

Mr Hollett said the future of property development in Karratha was multi-faceted.

“There needs to be more housing and more housing choice, so whether that be singles, couples or families, I think we need to recognise the diversity of the demographic,” he said.

Mr Hollett said providing appropriate housing would build and strengthen that community and should be a long-term strategy.

In the shorter term, there was an immediate need to accommodate FIFO workers contracted to work on projects such as Pluto, Gorgon and expansions to Rio Tinto’s iron ore projects.

Another hotel, The Tambrey Tavern, has been sold to privately owned developer and part-shareholder Sulcon Group for $20.1 million.

The transaction included development approval for a further 298 rooms, including a mix of 113 serviced apartments and 36 residential apartments.

Jones Lang LaSalle vice president of investment sales Aaron Desange, who handled the sales, said there had been significant interest in both hotels.

Developer Sulcon did not have a definite start date for construction of the additional Tambrey rooms but was dedicated to progressing with the plans, Mr Desange said.

The Karratha International Hotel has also responded to an increase in demand from the resources sector, with plans for additional accommodation. It initially intended to add another 60 rooms to its 80-room hotel, with construction beginning in May.

However, hotel functions manager Linda Kelman said construction had been delayed because the hotel decided instead to construct self-contained units, which would be of more use to its resources industry clients.

Property developer Finbar is expecting to complete construction of the high-rise Pelago West apartment project in coming weeks, which will have an expected end value of $90 million.

Managing director Darren Pateman said 77 of the 114 apartments had been sold to a mixture of resources companies, large corporates, owner occupiers and investors seeking a stronger rental yield.

The second stage of the development – the 170 apartment Pelago East – will be launched in the second half of 2012 and was expected to be worth approximately $155 million at completion.

Mr Pateman said apartment accommodation was a more efficient use of land and infrastructure and he expected there to be a gradual shift towards quality accommodation as regional towns matured and became more desirable communities.

“We do not see our Pelago opportunity as a single project commitment but rather the beginning of a long-term relationship with Karratha and other Pilbara centres, where we can develop better lifestyles for Pilbara workers and their families and help satisfy demand for many years to come,” Mr Pateman said.

Perth-based company Greenvalley Asset is also investing in Karratha, with $250 million being spent on developing luxury apartments east of the central business district.

Angus Murray, managing director of PRDnationwide (which is developing and marketing The Ranges development on behalf of Greenvalley), said the permanent “resort-style” neighbourhood was aimed at white-collar workers in the resources sector who may be in the town for one week or one year, depending on their contract.

“In these cases, companies want fully self-contained rooms where they can accommodate the bulk of their people in one location,” Mr Murray said.

“We are also catering to their need to offer higher quality accommodation to attract the best staff and their desire to better consider the wellbeing of their employees.

“Many of these staff spend four to six weeks at a time in Karratha and their standard of accommodation is very important to them.”

Following expected completion of the first stage in November, the development would be extended to include a larger range of apartments as well as hotel-style reception, licensed restaurant catering for up to 250 people per sitting, two resort swimming pools, tennis courts, gymnasium and 3.5-hectares of communal open space and gardens.

Construction company Pindan and Otan Property Funds Management have partnered to build 100 houses as a residential work base for Rio Tinto workers, while Mirvac has been selected as the developer for 1,500 homes in the new suburb of Mulataga, east of the city centre.

The Mulataga development is part of a wider project intended to transform Karratha’s city centre and create the new residential suburb, with the first stage expected to be completed in 2014.

It’s expected to attract investment of up to $1.5 billion from the state government, LandCorp and the private sector.