Growth forecasts have been cut and deficits are higher across the next four years in the federal government’s budget update released in Perth today, with Treasurer Scott Morrison touting a reduction in spending growth as revenue continues to plummet. 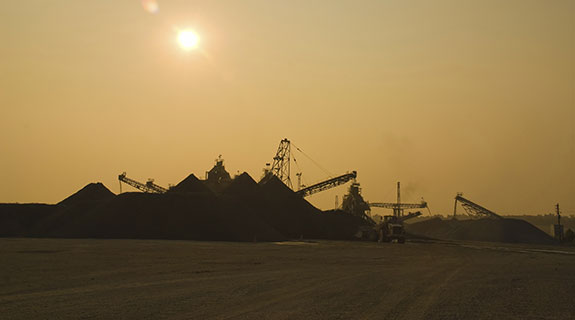 The iron ore price will average $US39 per tonne, according to Treasury.

Growth forecasts have been cut and deficits are higher across the next four years in the federal government’s budget update released in Perth today, with Treasurer Scott Morrison touting a reduction in spending growth as revenue continues to plummet.

That was partly driven by a continuing drop in the terms of trade, with iron ore prices forecast at about $US39 per tonne (free on board), and thermal coal at $US52/t.

But there was some good economic news, with unemployment now expected to see out the year at 6 per cent, compared with 6.5 per cent in the budget.

Additionally, the Treasury’s confidence interval estimates of GDP growth suggest it is highly unlikely Australia will enter a recession in the year ahead.

Revenue write-downs of $34 billion dented the bottom line, however, with deficits increasing more than $26 billion across this financial year and the three coming.

The return to surplus has been moved out another year to 2020-21, and the budget documents additionally show that the federal government may not reach its goal of a 1 per cent of GDP surplus.

Treasurer Scott Morrison stressed that the government understood and was on the path it needed to follow to return to surplus, although he didn’t want to risk Australians’ prospects, growth and jobs by taking a shortcut to his destination.

“The underlying deficit is projected to contract from 2.3 per cent to 0.7 per cent of GDP over the budget and forward estimates,” Mr Morrison said.

“Real growth in payments has been reduced from 2 per cent to 1.8 per cent per annum over the forward estimates.

“All policy decisions taken since the budget, including the cost of Senate negotiations, have been more than offset by savings measures, adding almost $400 million to the bottom line.”

He said the results were ahead of financial market expectations.

That included funding for Syrian refugees and adding new cancer treatments to the pharmaceutical benefits scheme.

Savings of $10.6 billion included integrity measures in the welfare system, worth about $2 billion, he said.

Other measures included a cap on ‘green army’ spending, saving about $300 million.

Ai Group chief executive Innes Willox said the budget revisions were sobering and highlighted the need to tackle issues such as tax reform and workplace relations.

“The increase in the anticipated budget deficit reinforces the uncomfortable extent to which our economy is reliant on commodity exports and the importance of developing alternative sources of economic activity to diversify the structure of our economy and to reduce our exposure to commodity price volatility,’’ he said.

“It would be a grave mistake to introduce excessive corrective fiscal measures that pull the rug from under the tentative and still-fragile recovery that is under way in non-mining sectors of our economy.”

"Thankfully for Australia, the fiscal starting point was so strong (the government had a net asset position of 3.8 per cent of GDP in 2007-08) that the government has been able to run continual budget deficits since then and still have low public debt levels when compared with others," he said.

"But the trajectory is worrisome.

"Australia has seen one of the more rapid increases in its government debt when compared with the developed economies."

Mr Bloxham said Australia had had the largest increase in net government debt since 2008 of all AAA-rated nations.