Deeper water for $250m at Freo

THE port of Fremantle is undergoing a massive facelift as a $250 million harbour-deepening project brings the facility up to date to cater for much larger vessels. 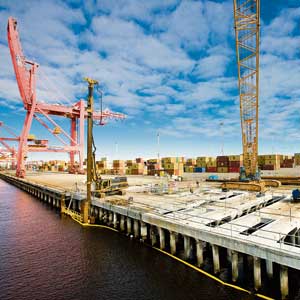 BIG BERTHERS: Cargo vessels up to 65,000 gross tonnes will be able to enter Fremantle Port fully laden after the harbour-deepening project is complete. Photo: Fremantle Ports

THE port of Fremantle is undergoing a massive facelift as a $250 million harbour-deepening project brings the facility up to date to cater for much larger vessels.

In what is Fremantle Ports' most significant infrastructure project in decades, the deepening of the inner harbour will allow bigger G Class and post-Panamax ships of about 65,000 gross tonnes to enter, dock and unload their cargoes, fully laden.

Catering for increasingly larger ships has also been the primary reason for the previous two harbour deepening projects.

This time round the port authority intends to deepen the inner harbour and entrance channel to 14.7 metres and the deepwater channel to 16.5 metres.

This will enable container ships of up to 14 metres draft to access the port fully loaded, with the aid of the draft-enhancing technology known as Dynamic Under Keel Clearance.

Currently, the maximum draft capacity for container shipping at Fremantle is 12.8 metres, which means G Class and post Panamax vessels are unable to enter fully laden.

The average size of container ships calling at Fremantle Port has increased by about 85 per cent during the past 15 years, highlighting the importance of this project in terms of ensuring container trade through the port continues to grow in line with shipping developments.

Port of Melbourne is in the midst of its own deepening program, which will give the Victorian port the ability to accommodate container ships of up to 14 metres draft.

Following the completion of Melbourne's project, if not for the deepening program under way at Fremantle, WA's container port would be the nation's shallowest after Melbourne, Sydney, Brisbane and Adelaide.

The demand for increased draft is expected to escalate when Melbourne completes its deepening program at the end of 2009.

"Fremantle needs to deepen now to avoid loss of services by the larger ships now on the Australian trade routes," Mr Leatt-Hayter said.

"Being the first and/or last port of call for many of the container shipping services coming to Australian ports, it is important that Fremantle has the maximum draft necessary to allow the vessels to call at their cargo handling capacity."

Transport Minister Simon O'Brien said that, in 2008-09 Fremantle Port handled 26.6 million mass tonnes of cargo, with 1,830 ship visits. The value of trade through the port was almost $26 billion.

"The port's container trade, although impacted by the world economic downturn, has grown by an average of about 9.5 per cent annually since the early 1990s," Mr O'Brien said.

The works also involve strengthening the existing container berths on North Quay, and construction of a seawall at Rous Head to contain dredged material from the harbour creating an additional 27 hectares of land at Rous Head for port-related purposes.

The construction work on this project will be carried out by a Thiess Georgiou joint venture as the lead contractor for the berth works and seawall while dredging specialist, Boskalis Australia has been awarded the contract for the dredging program.