Debt load a challenge for Barnett

As the state election campaign heats up, the focus is on fiscal responsibility more than ever. 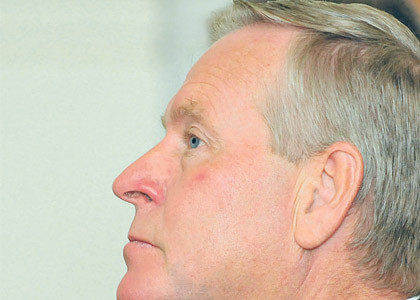 AT THE LIMIT: State debt has climbed to $18 billion on Premier Colin Barnett’s watch.

As the state election campaign heats up, the focus is on fiscal responsibility more than ever.

OPPOSITION leader Mark McGowan had a crazy, brave moment last week when he spelt out a range of government spending commitments he would cut if he won next month’s state election.

It was an unusual move for an opposition leader; they normally try their hardest to be a small target and let the government slip up.

Instead, he specified proposed savings to cover the cost of Labor’s ambitious Metronet rail plan.

Mr McGowan claimed up to $300 million would be saved by developing a new major sporting stadium on the Kitchener Park site in Subiaco, as favoured by the Langoulant taskforce four years ago, instead of building at Burswood.

Other savings included scrapping $330 million of state government funding earmarked for the mothballed Oakajee port and rail project and deferring the new museum, which is tipped to cost in excess of $400 million.

Premier Colin Barnett responded with comments that he is using with more regularity - that he has the big vision for Perth and the state while Mr McGowan is bereft of ideas.

“In one day, Mark McGowan, who wants to be premier, has abandoned some of the most important projects in this state for one reason only: because his costings don’t add up on his rail projects,” the premier said.

“That’s why he made those decisions.

“Small thinking, panicked thinking, not a sign of a good government.”

Treasurer Troy Buswell added to the attack by releasing Public Transport Authority costings, which indicated that Metronet would cost a lot more than Labor’s $3.4 billion estimate.

Mr Buswell said the actual cost would be closer to $6.4 billion, describing the shortfall as a “massive funding black hole” that proved Labor’s “inability to add up”.

The main reasons the project would cost far more than Labor predicted related to engineering issues around the airport, where the water table is high, and an upgrade of the existing rail link from Bayswater to the city, deemed necessary by the Liberals.

Labor rejected the PTA costings for Metronet, saying they compare apples with pears but was forced to make a tactical retreat late on Friday.

That’s when Mr McGowan said Labor would submit its spending proposals to Treasury; just days earlier Labor had been arguing that Treasury could not be trusted because of Mr Buswell’s interference.

Labor justifiably tried to turn the setback into a positive by asserting that the Liberals should also submit their spending proposals, particularly the MAX light rail plan and its proposed rail link to the airport, to Treasury.

The heat on the government was turned up on Monday when ratings agency Moody’s Investors Service reaffirmed its negative outlook for the state’s coveted AAA credit rating.

Moody’s said WA had “ample budgetary flexibility” and a robust resource-based economy but would only regain a stable ratings outlook once the government narrowed the widening gap between its income and spending.

“The state’s projected cumulative cash deficits could push its debt burden over 100 per cent of revenues by 2013-14, which would be high when compared with other Australian jurisdictions,” Moody’s said.

This followed a warning in December that high debt levels were putting the state’s AAA rating at risk.

Growing debt has been the government’s Achilles heel.

After inheriting state debt of $6 billion, it has increased to $18 billion, and Treasury projections show it could increase to $23 billion.

The government has taken some measures to improve its fiscal position but has never done enough to halt the growth in state debt, let alone reduce it.

Mr Barnett takes a surprisingly unfussed approach to this issue, asserting this week the government could afford to take on more debt in order to fund its infrastructure program.

He correctly makes the argument that borrowing to fund long-term investment is OK.

This line of argument is fine in principle but there is a limit to how far it can be taken.

Judging by the growth of state debt and the tone of Moody’s commentary, that limit has well and truly been reached.

A more robust and fiscally prudent response is warranted.