The poor outlook for the iron ore price may cause some big players to question the wisdom of past decisions. 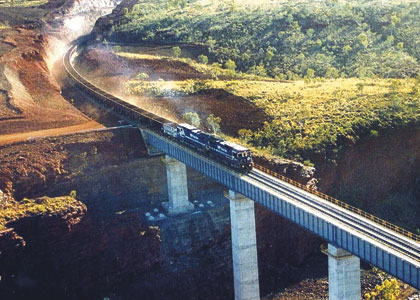 MAIN DRIVER: Failure to share infrastructure may cost Fortescue and BHP Billiton if the iron ore price fails to rebound from current lows, or falls further.

The poor outlook for the iron ore price may cause some big players to question the wisdom of past decisions.

UNTIL recently, it was impossible to imagine Fortescue Metals Group boss Andrew Forrest and BHP Billiton chief executive Marius Kloppers agreeing on anything; but today, with the iron ore price down sharply, they have something in common to talk about – their reputations.

For rich men, and they are both rich (albeit one more than the other), there is nothing more precious than a high standing among peers. Money is interesting but recognition for making good decisions and strong leadership outweighs a personal bank balance.

Mr Forrest, whose fortune has crashed by an astonishing $4 billion over the past 18 months, will be shattered by the prospect of repeating his Anaconda Nickel experience, a dreadful corporate meltdown linked to the early failure of the Murrin Murrin mine to produce nickel at a competitive price.

Mr Kloppers, whose fortune is tied to his salary and generous package of shares and option in BHP Billiton, will be wondering whether the crisis gripping the Western Australian iron ore industry will be the final challenge in a series of badly timed and executed decisions, which include a failed attempt to acquire mining rival, Rio Tinto, a failed takeover bid for Canada’s Potash Corporation, and a loss-making plunge into the US gas industry.

Both men need the iron ore price to rise, and quickly, before vultures start circling; but both also face the problems of a ‘changed equation’ resulting from Australia’s high internal cost structure bumping head first into lower commodity prices.

In Mr Forrest’s case, scavengers are already circling because FMG is a high-cost iron ore producer caught in the middle of a spectacularly ill-timed and expensive expansion program, an event similar (but with variations) to what happened at Anaconda.

In Mr Kloppers’ case, the expiry of his five-year employment contract next month could cause the BHP Billiton board to think that falling iron ore profits and a messy expansion program, might be the signal to say ‘thanks Marius, and goodbye’.

It need not have come down to the current crisis because during the past few years there have been several opportunities for cooperation between Messrs Forrest and Kloppers, rather than the fierce competition that has done little except ratchet up costs in the Pilbara.

Shared railway and port infrastructure, something Mr Forrest wanted from the day he founded FMG, would have saved billions of dollars, and saved BHP Billiton from the problem of planning, and then dumping, the Port Hedland outer harbour.

Instead of sharing, FMG effectively replicated the BHP Billiton rail and port system, an investment that looked good when iron ore prices were rising but which has left the company with a massive debt load in a falling iron ore market, and with unsustainable employee costs caused by competition for skilled labour.

Just as high-profile staff are being jettisoned, so too will the famous $150,000-a-year truck driving jobs soon disappear as cost-cutting becomes the order of the day in the Pilbara, and workers have to once again compete for jobs.

Failure to cooperate on infrastructure, and intense competition for skills, are just two of the issues investors will question in the post-mortems of the boom, and how it flipped with lightning speed from a period of excess and wasted capital into a period of crisis management.

MR Forrest and Mr Kloppers will not be alone in being subject to an inquisition.

Rio Tinto chief executive Tom Albanese will also have questions to answer because of the way he hitched his company’s future to a belief in a perpetually high iron ore price – a mistake that could rival his decision to pay $40 billion for the Alcan aluminium business just before the GFC.

Gina Rinehart will be a fourth high-profile victim of the iron ore slowdown, suffering reduced cash flow from her Rio Tinto royalty, a reduced profit share from the Hope Downs mine, while also facing a much higher financing hurdle if she is to develop her Roy Hill mine on the proposed timetable.

Clive Palmer will struggle to do any more deals in iron ore but might finally enjoy the royalty income from the Sino Iron project he has been talking about for some time, if Sino can get its Pilbara magnetite processing project to work.

The magnetite iron ore miners, a favourite target of mine for the past five years, have already suffered a heavy sell-off as investors look closely at their high cost structures in a low-price environment.

Tony Poli at Aquila Resources will find it extremely difficult to advance his West Pilbara iron ore project, and media proprietor Kerry Stokes will question how long he sticks with Iron Ore Holdings, a successful vendor of iron ore tenements and undeveloped projects in the boom, but not a product in strong demand today.

WHAT’S happening in WA’s iron ore industry – a period of entirely predictable contraction caused by falling prices and rising costs – is not confined to a single commodity, or state.

Nathan Tinkler is the public face of the flip from boom to bust in coal, with the man behind Aston Resources now struggling to service his debts and facing the prospect of having to sell his 21 per cent stake in Whitehaven Coal.

Chris Wallin, a Queenslander with a fortune built on coal, will struggle to develop any more of his projects as demand for high-cost Australian coal remains depressed in the face to low-cost Indonesian and South African material.

The challenge for all boom-time managers is learning how to survive a period of low prices, which will not be easy for people who have ridden high on a rising tide of strong prices, but must now fight to survive as the tide flows out.

“One of the serious obstacles to the improvement of our race is indiscriminate charity.”