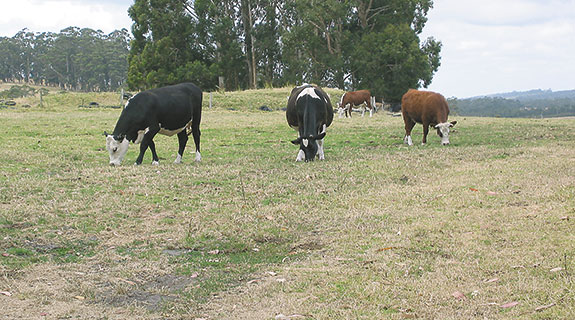 GRAZING: The government wants to encourage investment in the state’s agricultural industry.

THE state government is struggling to sell its economic strategy, with around 80 per cent of respondents to a recent Chamber of Commerce and Industry of WA survey feeling there is no credible plan to regain and retain a AAA credit rating.

The result of the March survey comes a month out from the May 12 state budget and amid continued easing in retail sales, and following a cabinet reshuffle in which the government has refocused on broadening its economic platform, highlighting agriculture, science and tourism as key elements.

State debt is projected to peak at $39 billion by the end of the decade, while two credit rating downgrades have affected consumer confidence.

Only 5 per cent of respondents to the CCI survey were optimistic about the short-term economic outlook, down by four percentage points on the previous quarter.

“One key factor in this decline in consumer confidence is Western Australians’ concerns about the downgrading of our credit rating and growing uncertainty around how the government will fix it,” she said.

“In this budget, the public wants to see a clear plan on how the state government is going to regain the AAA credit rating through reduced spending and finding greater efficiencies in service delivery.

“This will be vital in restoring consumers’ confidence that WA will continue to be a low-risk place invest and do business.

“The government should also continue to progress with an asset sales and privatisation program that will create savings and allow the private sector to deliver services more efficiently for the benefit of the consumer.”

Significant revenue write-downs due to falling royalties as commodity prices slump have meant the government has struggled to keep even its operating balance in surplus.

In the 2012 state budget, revenue of $30.2 billion was projected for this financial year, with an operating surplus of $1.4 billion.

That was a fall of 6.5 per cent on last year’s number.

This mismatch, and a large build-up of debt to finance capital works projects, has driven borrowing to a record high.

A further problem for the government’s economic management credentials was that more than 90 per cent of CCI survey respondents felt the government could better support a transition away from mining investment-led growth.

Agriculture and innovation were considered industries most suited to this kind of investment.

It does mean, however, that Premier Colin Barnett has made the right picks when he highlights science and agriculture as key planks of the state’s economic development moving forward.

The question for the premier will be if he can explain to voters his decisions during the boom, focusing on mining and infrastrtucture.