Dealmaking Perth brokers in the money

Euroz, Hartleys and Argonaut rank as three of the most profitable stockbroking and investment banking firms in the country. 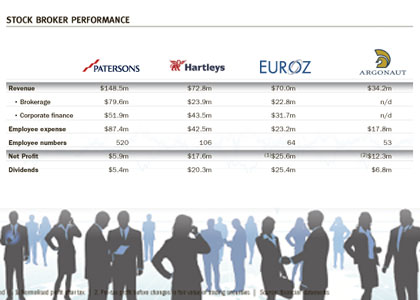 PROFIT: Euroz, Hartleys and Argonaut have all reported bumper profits for the year to June 2011, making them the envy of most other brokers around the country.

IT has been a tough few months on the stock market, but for a handful of firms in Perth this recent upheaval was preceded by a sensationally profitable period.

Euroz, Hartleys and Argonaut have all reported bumper profits for the year to June 2011, making them the envy of most other brokers around the country.

Euroz reported a 58 per cent lift in normalised profit after tax to $25.6 million, continuing a decade of success since the firm was established.

Hartleys nearly doubled its net profit after tax to $17.6 million, eight years after a management buy-out that brought the firm back from the brink of ruin.

Argonaut also delivered a surge in profit. Its underlying profit – before changes in fair value of trading securities – was up 53 per cent to $12.3 million.

Its net profit attributable to owners of the company was up by an even more impressive 148 per cent to $15.7 million.

The strong profits of these Western Australia-focused firms contrast with most of their competitors.

National player Patersons Securities, which is Perth’s largest retail stockbroker, incurred a 12.9 per cent slump in net profit to $5.9 million.

Many east coast firms had a very poor year, with Wilson HTM incurring a second-half loss, Austock suffering an underlying loss for the year, Bell Financial reporting a lower profit, and Shaw Stockbroking achieving a profit of just $1.2 million.

The three Perth firms that did very well have varied business models but share two traits – they have a big exposure to the mining sector, and they are all active dealmakers.

This is evidenced by their rankings in WA Business News’ annual mergers and acquisitions (M&A) and equity capital markets (ECM) surveys.

Hartleys advised on 14 WA takeover transactions last year, more than any other firm in the state.

It also ranked first nationally for the number of completed resources M&A transactions.

Writing in Hartleys’ annual report, chairman John Featherby said the level of advised M&A activity was a record for the firm.

Hartleys success in the corporate finance market showed up in the firm’s increased revenue.

While brokerage and portfolio management fees were up a little, its “corporate equity capital fees” nearly doubled to $43.5 million.

Hartleys staff and shareholders have been richly rewarded for their efforts.

Wage and salary payments were up 43 per cent $38.2 million, while dividends for the year totalled $20.3 million.

Euroz achieved a relatively small increase in revenue last year, in part because of a fall in proceeds on the sale of principal trading shares.

Its pre-tax operating profit from normal activities also showed only a small rise, albeit from a good base.

The kicker came from its share of profit from its two managed investment companies – Ozgrowth and Westoz Investment Company – which totalled $7.8 million.

That lifted ‘normalised’ profit to $25.6 million, while dividend payments were $25.4 million – an extraordinarily good result for a firm with 64 staff.

Argonaut achieved a 44 per cent lift in revenue to $34.2 million last financial year, with the directors saying all areas – broking, advisory and investment management – contributed significantly.

The higher revenue included a $5.6 million net gain on the sale of investments.

Patersons has become one of Australia’s largest retail stockbrokers, with about 300 advisers and 520 staff across the country. They achieved a small lift in brokerage revenue last year.

It is also one of the most active managers of capital raisings by small to mid-cap companies.

However its underwriting and corporate finance revenue fell last year to $51.9 million.

Chairman Michael Manford described 2011 as a year of consolidation, saying the private client department had a challenging year and the institutional desk a mixed year.

The firm said it was pleased to maintain revenue despite instability in global markets.

Meanwhile, Argonaut has officially opened its Hong Kong office, with managing director Eddie Rigg saying it will be a full-blown stand-alone business rather than simply a branch office.

Mr Rigg said the firm had three institutional brokers, one corporate finance executive and one researcher in Hong Kong and was aiming to double those numbers.

He acknowledged it was a tough time to be opening a new office, but was confident that two years of planning would pay off.