OPINION: Business News data points to a sustained low for WA’s corporate finance markets, but there are signs recovery may be imminent. 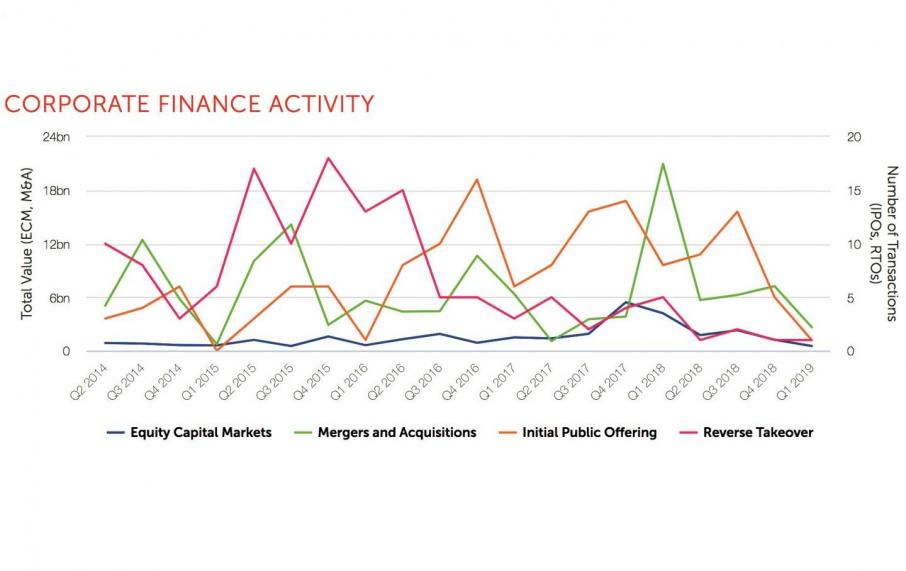 Regulators have tightened up on the conditions that allowed backdoor listings.

Is this the worst time in a generation for corporate finance markets in Western Australia?

Our data certainty suggests so, at least for the past five years.

As you can see from the accompanying graphic, which is available to subscribers to our website, there has not been an instance in recent memory when all the key trends we follow have bottomed out similtaneously.

I have previously noted how, usually, there is some contrarian nature to these trends.

And reverse takeovers go off the boil when there are lots of initial public offerings, or floats as they used to be called.

The last time all these trends went close to the bottom was in early 2015 when three of the four measures bottomed out, with only RTOs running their own race.

As Business News editor Mark Beyer and I discussed in a recent podcast, there is one reason why – just looking at the chart – that might be different this time.

The regulators, both the stock exchange and the corporate watchdog, have tightened up on the conditions that allowed RTOs or backdoor listings as they used to be called.

RTOs are a mechanism for struggling companies to relist by watering down their existing shareholders and bringing in new assets.

Regulators don’t like them, presumably, because existing shareholders often find themselves in completely new industries with major investors and managers they might not have chosen to put their money with.

An alternative view is that in tough times, new projects get to market cheaply, and shareholders in dud companies get an opportunity to recover some of their losses.

In any case, it is hard to know whether RTOs would be flying or not if the regulatory appetite had not shifted.

But back to the question I asked at the start … is this the worst time in a generation for corporate finance here?

It is hard to be definitive, but my answer is no.

While many in the junior mining sector are saying this past year has been the worst they have ever seen, there is a massive difference in the potential for markets overall between now and that previous nadir in 2015.

Back then, WA was just coming to grips with the awful hangover following the party that the resources boom had been.

Around then, the last of the major projects were being completed and it was well and truly evident there was nothing in the pipeline to stimulate the economy.

Five years later, the picture is rosier, if not perfect.

There are many significant projects ramping up, albeit at lower numbers and less urgency. Those who need to build things are doing it on their own terms.

Suppliers are, therefore, wary and constrained, but there are less of them. The survivors have lower cost bases and can operate leaner and smarter.

Nevertheless, there are businesses making money and there is a lot more optimism in the air.

Of course, business in property and retail may not feel quite so confident. Without a boom to attract investor attention, there’s less funding coming from other markets to invest in the broader economy.

I can’t say that the decision makers at Azure Capital were watching our chart, but with French banking group Natixis buying a majority stake in the state’s most prolific deal marker for the past 10 years (according to our BNiQ search engine) there’s a hint that the local investment bankers figured now was a good time to get some bigger muscle.

It is not the first time such a thing has happened.

In fact, the key founders of Azure, being John Poynton, Mark Barnaba and Geoff Rasmussen, had sold their previous incarnation, Poynton and Partners, to an offshore firm for a sizeable sum back in the early 2000s, a time when deals were as scarce as they are right now.

In fact, it might be cheeky to say so, but it seems if you leave a bunch of deal makers idle for too long they will find a way to sell their own company.

What is different from then, though, is the nature of the WA market. It is way bigger both in terms of the scale of the companies operating here and the investment banking businesses that now have bases in Perth.

It will be interesting to see how the market shapes up as we emerge – soon I hope – from the tight market.