Deal makers bank on a bounce

SPECIAL REPORT: The past 12 months have been tough for WA’s corporate finance professionals, but there is cautious optimism that 2014 will be a different story. 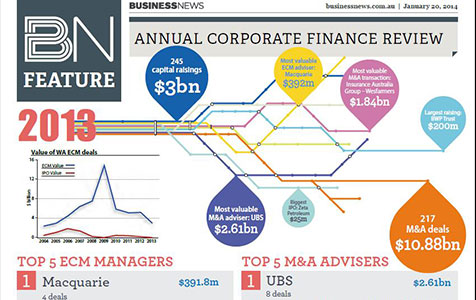 The past 12 months have been tough for WA’s corporate finance professionals, but there is cautious optimism that 2014 will be a different story.

There's only one way to go when you’ve hit rock bottom – up.

After an extended dry period, Perth’s corporate finance professionals are hoping the bottom was actually hit during 2013, a challenging 12 months in both equity capital markets and mergers and acquisitions.

The largest deal for the year occurred in August – BWP Trust’s $200 million entitlement offer, which was lead managed by UBS, with Herbert Smith Freehills acting as legal adviser.

But the 2013 figures were down about $2.2 billion on 2012, and remain a long way off the record-high $14.8 billion raised by WA companies in 2009, which included mammoth raisings from Wesfarmers and Woodside Petroleum, at $4.7 billion and $2.5 billion, respectively.

Not since the start of the recent boom in 2005 has the total value of equity capital market transactions dipped to $3 billion in WA.

It was a similar story for mergers and acquisitions practitioners.

“Both deal value and volume was well off, and subdued levels of deal flow and activity reflected the rapid deterioration in share prices and the general sell off in resources,” Macquarie Capital Advisers executive director Michael Ashforth told Business News.

“For high levels of M&A activity, you need a general expectation that values are going up. Otherwise, if you think they are going sideways or down, there is less of an incentive to move.

“In a world where people were risk-averse or uncertain, that translated into lower levels of deal activity.”

Highlights of what was a lacklustre year overall included Insurance Australia Group’s $1.85 billion buyout of Wesfarmers’ Australian and New Zealand insurance underwriting operations, brokered by UBS and announced in December.

Another significant transaction was the $1.2 billion purchase of Griffin Power’s Bluewaters power station in Collie by Japan’s Sumitomo Corporation & Kansai Electric Co, while the $462 million acquisition of construction and engineering services firm Clough by South Africa’s Murray & Roberts was widely hailed as a great deal for shareholders.

There was also a small flurry of activity in the gold sector in the fourth quarter of 2013, with 12 M&A transactions totalling $193.9 million.

The most talked about deal came in late December, with Northern Star Resources securing Barrick Gold’s Plutonic gold mine for $25 million, a deal touted by brokers and analysts as a bargain for the miner, which is seeking to double its production to 200,000 ounces of gold per year.

Analysts are expecting a repeat of Northern Star’s success at the Paulsens gold mine, which it acquired in 2010.

Stockbrokers Hartleys and Argonaut set share price targets of $1.15 following the acquisition, which would represent a solid return on Northern Star’s current share price of around 96 cents.

“Boards of acquirers are also evidencing higher conviction around M&A to drive growth,” he said.

“Resources activity will likely pick up [in 2014], but still be significantly lower than the boom years.

“Most of the resource transactions will probably involve divestments of non-core assets from majors and well capitalised mid-cap companies buying struggling juniors.

“We are also likely to see a return of Chinese buyers, particularly private companies.”

The difficulties raising capital were even more pronounced in the initial public offerings market.

According to research released by Deloitte there were just five WA IPOs in 2013, collectively valued at $48.2 million.

The largest IPO of 2013 was Zeta Resources’ $25 million offering, a deal brokered by Azure Capital and advised by Hardy Bowen.

The IPO market was set to be boosted by the $510 million offering of BIS Industries, but the logistics firm’s private equity owner, KKR, pulled the float in November, citing unfavourable sentiment towards the resources sector in Australia.

“Resource private equity firms were swamped with opportunity at the end of last year, and therefore people weren’t necessarily prepared to go to the IPO market,” Mr Martin said.

“So the Sentients, the RCFs and the Denham Capitals of the world were having a bit of a field day towards the end of 2013, just from the opportunities available.”

The best-performing corporate advisory firm in the ECM space in 2013 was Macquarie, which raised a total of $391.8 million for WA-based clients in four transactions.

Highlights for Macquarie included a pair of share sell-downs for BC Iron, which totalled $192 million, and Forge’s $187 million block trade.

UBS was close behind, raising $364.7 million in five deals, while Patersons Securities was in third position, with a total of $229.5 million raised over 27 transactions.

Another firm considerably active across both ECM and M&A in 2013 was Azure Capital, which executed 17 M&A transactions, totalling $491.3 million, and led seven capital raisings, with a collective value of $65.76 million.

Significant Azure transactions from the final quarter of the year included advising Asanko Gold in relation to its $194 million, all-share acquisition of PMI Gold, and a $15 million placement by Panoramic Resources.

Azure director Adrian Arundell told Business News the company’s pipeline of work strengthened towards the end of the year, with cautious optimism creating renewed momentum for deals that stalled in 2013 due to a lack of confidence.

“We have a number of transactions across public and private markets, with the first half of 2014 expected to be a stronger period of activity than we have probably seen for the last few years,” Mr Arundell said.

He said 2014 was expected to be more positive for equity raisings, with a number of non-resources sector businesses preparing for significantIPOs, including car dealer network John Hughes.

“A declining $A will provide assistance for Western Australian businesses,” Mr Egerton-Warburton said.

“Businesses will continue to focus on costs, and those who have built or are building strong relationships with the market will be the ones to emerge fastest and strongest from the tougher period.”