Day of the drones dawns

Costing between $40,000 and $100,000, the drones Paul Deuchar sells and trains people to fly are more than just expensive toys. 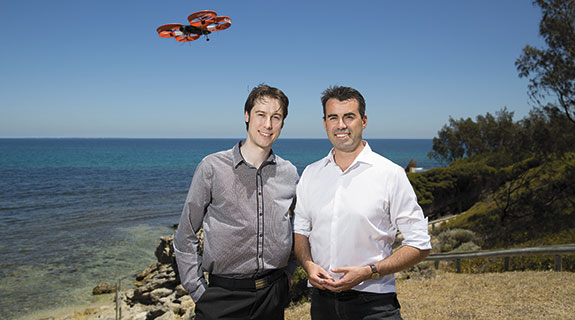 Costing between $40,000 and $100,000, the drones Paul Deuchar sells and trains people to fly are more than just expensive toys.

And while there are currently 10 of Mr Deuchar’s unmanned aerial vehicles flying in Western Australia, the Perth businessman has designs on bigger markets offshore for his fledgling company, Sci.Aero.

Already Mr Deuchar has attracted a range of clients, including Woodside Petroleum, BHP Billiton, Landgate and others looking to survey assets and land from the air.

While Sci.Aero was only established last year, it has a compelling back story.

Drawing on success and lessons learned from both businesses (including an expensive court case involving mislabelled export equipment), Sci.Aero is now opening an office in Houston, Texas, with Mr Deuchar set to move his family to the global oil and gas hub next month.

“We were the first company ever to use UAVs in (WA’s) resources and oil and gas sector, doing operational work offshore on an oil and gas asset on the North West Shelf,” Mr Deuchar told Business News.

With a focus on safe operating procedure and payload capacities that are limited more by Civil Aviation Safety Authority requirements than technical restraints, Mr Deuchar said Sci.Aero’s products allowed companies to achieve more with a high degree of safety.

“Everyone asks how high, how far and how long and they’re the wrong questions,” he said.

“It’s more what are you trying to achieve and that’s usually outside of an OH&S comfort zone; we seek to allow our people to achieve the same task more efficiently from a position of complete safety.

“When (Woodside) goes (to the North West Shelf) to replace flare tips, the usual process is a shutdown for up to nine days in order to have a team of safety climbers scale it.

“With our technology ... companies don’t need to shut down that asset anymore; we can go out there while it’s live and provide them high quality data within a matter of minutes.”

Another Perth-based tech start-up that sought its fortune in the US, Shark Shield, recently revealed sales of its shark repelling technology to divers and surfers had increased 270 per cent and more than 50 Florida retailers now stocked the product since the business increased its presence in the state last year.

“Critical to success in establishing new geographical markets is having the right people on the ground in that location, and they can’t just be anybody,” chairman Lindsay Lyon said.

“You need experienced professionals with local knowledge, who know how to plan and execute, and most importantly who have a vested interest in the business.

“They may have an equity stake, options or sweat equity (but) they should be sharing in the upside and success of the business they are building.”