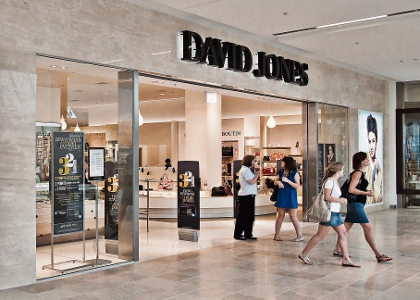 David Jones has been been approached by a UK investor, believed to be EB Private Equity, with a takeover proposal that reportedly puts an enterprtise value on the retailer of $1.65 billion.

The approach sparked a sharp rise in the upmarket retailer's share price.

The department store chain said earlier today it had received a letter from a non-incorporated UK entity regarding a takeover proposal.

It later announced that a UK blog site had named the entity as EB Private Equity, which is a Luxembourg and UK property developer and private equity partner.

The $1.65 billion bid reportedly comprised three components: $850 million of equity, $450 million of debt provided by a syndicate of banks and investment institutions and $450 million of "residual equity" for the existing David Jones shareholders. (Editor's note: these components add up to $1.75 billion; the discrepancy was not explained.)

The telegraphed move on David Jones, whose shares hit a record low earlier this month, has prompted analysts to expect that other bidders could enter the fray to take advantage of the near bargin-basement price for the retailer.

IG Markets analyst Cameron Peacock said it was not surprising to see some offshore interest in Australian retailers which had been trading at bargain basement prices.

"Now's the time to buy a retailer or make a move because you position yourself for when sentiment changes," Mr Peacock said.

"You want to do it when sentiment is down, when share prices have been hammered and there's a sense of frustration and depression in the air, which there certainly has been this quarter."

At its current price, the retailer is worth $1.369 billion compared to $1.195 billion before the news broke.

The offer for full control of David Jones, was said to be valued at $1.65 billion, the retailer said.

City Index analyst Peter Esho said EB Private Equity could be interested in the retailer for its real estate as David Jones owns property worth $462 million.

He said that while the approach was very odd he believed it was a serious offer.

Mr Esho said even if David Jones did not act on the offer, it was still a good sign for the business.

"It's an indication there are investors, not just in Australia but globally, that look at it as good value," he said.

"The most likely winner of any battle for David Jones we think will be an Australian firm and most likely Solomon Lew's Premier Investments, which recently added former David Jones chief executive Mark McInnes to its management team," Mr Esho said.

Other Australian retailers benefited from the David Jones takeover offer on Friday.

David Jones said it had not received details of EB Private Equity's financial capacity or its management.