IF anything is troubling Datacom Systems WA managing director Basil Lenzo, it’s that the West Leederville-based professional IT infrastructure and services firm could be growing too rapidly.

“It is growing too fast, to be honest,” Mr Lenzo told WA Business News.

“It’s something I’m conscious of, however we’ve now built a structure that will enable the business to manage that growth.

“We had to change our structure given the massive growth that we have had, now there’s a lot more accountability back to the business divisions, which are all being run by a general manager.”

The recent growth of Datacom Systems follows the firm’s success in 2007-08, when it was selected as one of WA’s top 10 Rising Stars, with special recognition for being the youngest company in the top 10.

The Rising Stars program was initiated by WA Business News in 2003 to celebrate the success of fast-growing privately owned WA businesses.

Over the years, the awards have celebrated up-and-coming local businesses such as inaugural winner Gatecrasher, IT firm Empired in 2004, West Perth-based Thinksmart in 2006, and 2009 winners Specialising Broking Associates and Anchor Foods.

By meeting a list of criteria such as company fiscal performance, past and present growth potential, and strategic capability and communication initiatives, Datacom has been selected from this year’s entrants to place first in the Rising Stars Awards.

“From our perspective we were very privileged to be nominated the first time and getting to the top three,” Mr Lenzo said.

“However, it also took a lot of work and a lot of passion from the three directors [Mr Lenzo, David Cameron and Peter Giannas] and the broader business and the people within the business to get to that point. The past 12 months for us has seen massive growth and we’ve invested in some really good people.

“All of our people are really good, but we’ve invested in some skill sets that have really enabled us to grow and win some really significant business around WA.”

Mr Lenzo said the core difference contributing to the firm’s growth this year is Datacom’s internal systems and structures, which were a lot smoother.

“Our processes are a lot cleaner, our people are a lot more engaged and we have a development plan and a progression plan where they need to go,” he said.

The business worked hard in the past year to improve accountability among the 55 staff and upper management, by developing autonomous business units with general managers who have their own budget.

“We worked hard this year at the budget process at driving KPIs top down,” Mr Lenzo said.

“Each business unit is now managed in its own right by a general manager and they have a budget and operational control.

“We cascaded the top-level strategy down to each business unit, and then they with their teams formulated the business strategy and then what they did was, they spoke to each individual whose KPIs are to tie into the business unit strategy.

“Everyone is absolutely accountable for the result at hand.”

He said the acquisition would contribute to the projected growth of Datacom in the next financial year and was estimated to give the firm an extra $6 million to its top line.

Mr Lenzo said the firm was bullish on the forecasted growth, despite the impact of the global economic crisis, because Datacom used the downturn to “take a breath”.

“I think if you speak to business people in Perth, that period as much as it was painful, in terms of forecasting it actually enabled us to just take a bit of a breath, review our systems, processes, review the people, review clients, and enabled us to get back on focussing on what we are good at,” he said.

“The reality is it did enable us at a management level to go and have a quick look inside the business and focus on working in it, rather than on it.

“The first few months we really saw the impact across the numbers, the morale of staff, and there was overall concern in particular because it was everywhere.

“The reality is, when you look at commercial numbers it did impact us slightly but not as much as we initially thought it may and we ended up having growth on our top number.

“When you’re growing rapidly you tend to try and guess ahead of the curve and when that curve stops you have take a step back and just look at the business model and look at the areas that we were trying to get into and realise that it wasn’t core.

“So we then trimmed that off.”

Datacom was forced to make three positions redundant as it went back to focusing on what its core business is, which is around infrastructure and projects. 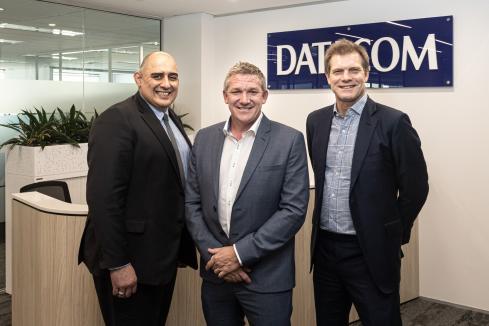