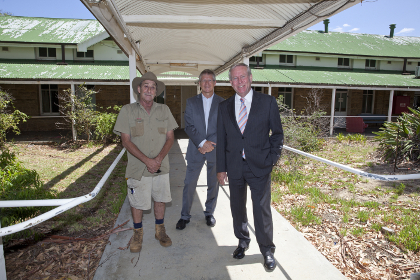 The state government is expected to raise $10 million from the sale of a 1,500 square metre parcel of prime riverfront land at the edge of the heritage-listed Sunset Hospital site in Dalkeith.

Premier Colin Barnett announced today the government would sell the parcel of land on Iris Avenue, which contains a non-heritage listed, privately leased property, in order to finance a plan to turn the 8.5 hectare site into a community area.

"I can assure you the land will sell overnight," he told reporters.

"This will be one of the best spots of real estate in Dalkeith."

Mr Barnett said the government had committed $275,000 in 2013-14 towards developing a restoration plan for the site, which has been mostly vacant for more than 15 years.

The site's dilapidated buildings will be leased out to not for profit, cultural and arts groups, who will pay a nominal rent in return for an obligation to assist in the restoration of the buildings to heritage standard. The City of Nedlands and the University of Western Australia are each expected to be offered the use of a building.

The sale of the Iris Avenue land will be used to finance the costs of restoring sewerage, power and water to the heritage buildings, as well as their roofs and external facades.

The government will retain ownership of the remainder of the site, which will be rezoned, retaining its A-Class reserve status as well as all heritage buildings.

"You may well see an art gallery here, you’ll see charitable groups, you may see one of the buildings converted into a café or bar," Mr Barnett said.

"Those public facilities will be allowed. I don’t envisage any new buildings being put on the site. I think that would be contrary to the heritage listing."

Mr Barnett said Andrew Forrest's Australian Children's Trust charity, which currently holds a two year lease on one of the buildings, would have the option of staying there.

The Claremont Old Men's Home, later renamed the Sunset Hospital, was built on the site in 1904 and was heritage listed in 1997, two years after it was decommissioned.