A lobby group set up to defend a major component of Western Australia’s oversupplied electricity market has stepped up its political stunts today presenting a large likeness of a gold watch as a symbol that it's time to retire Muja AB power station. 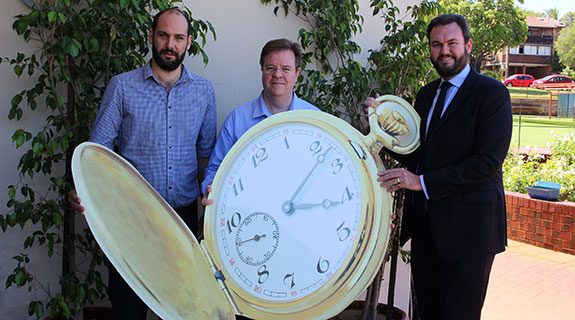 A lobby group set up to defend a major component of Western Australia’s oversupplied electricity market has stepped up its political stunts today presenting a large likeness of a gold watch as a symbol that it's time to retire Muja AB power station.

The Western Australians for Lower Power Prices lobby group has been set up by demand side management (DSM) proponents - medium and large electricity users that currently receive taxpayer funded payments to reduce or shut down their power use during peak demand periods.

Today, the group defended its campaign that has increasingly focused on pointing to flaws elsewhere in WA’s oversupplied electricity market.

In its presentation of the novelty gold watch and similarly giant-sized send-off card for Muja AB today ahead of a public information session attended by more than 100 people in Mt Lawley, Conservation Council WA director Piers Verstegen said Muja AB was a problem, not DSM.

“There’s no other workplace that I can think of that requires people to go to work and use 1950s technology. I don’t use a typewriter when I go to work and I don’t expect people to use a coal-fired power station to generate the energy that I need in my home, we’ve got much better alternatives,” he said.

The WAfLPP group has previously argued that DSM is a cleaner alternative as its generation of power for the rest of the grid (by shutting down its own power use) does not involve emitting greenhouse gases that would occur using a fossil-fuel fired power station.

Energy Minister Mike Nahan has been a vocal critic of DSM, which receives regular payments regardless of how often it's used, yet due to an oversupplied market has been called on very infrequently.

Spokesperson Richard Wilson said the group was open to discussing reform including reducing the amount of megawatts DSM provides and accepting lower prices being paid to DSM providers.

However, he said it felt compelled to respond to what it perceived as the government’s proposal to completely remove DSM.

“The proposals that have been put forward by the energy minister and the electricity market review will see a complete annihilation of demand side management within a Western Australian electricity market. That’s untenable while assets like a 50 year old coal-fired power station remain in this market. It’s not the right thing to do,” Mr Harris said.

Energy Minister Mike Nahan is on the record saying he does not intend to eliminate DSM altogether, but he has publicly chastised the system, which last financial year cost taxpayers $64 million.

Just how WA’s capacity market and DSM will be reformed is a hot button issue, with 31 organisations recently making submissions in relation to proposed changes that remain under review.

The state government, which announced the wide ranging reviewand reform of the electricity market more than a year ago, has come under fire for some aspects of the process so far, with some critics expressing concern that it is conflicted due owning and controlling a large proportion of the market.

Much of the WAfLPP lobby group’s campaigns, which include a significant media spend, have focused on political warnings for the Barnett government.

A recent poll it commissioned of almost 1,300 people showed 34 per cent, the largest single majority, rated cost of living pressures as most important to them when considering who to vote for at the next state election.

It found 44 per cent of those polled thought the Barnett government was doing a ‘bad job’ managing the WA economy and 60 per cent thought having state-owned Synergy as the sole provider of electricity to households was ‘bad’.

Mr Grimes said the WA energy market was broken and the WAfLPP was keen to promote positive change.

“It is an old, inefficient and polluting energy grid. It is a relic of the past," he said.