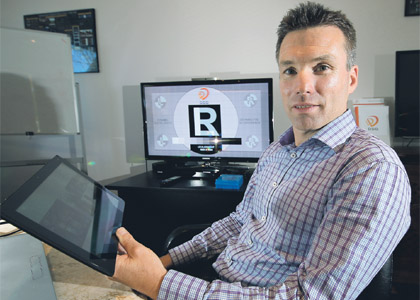 WORLDWIDE growth in demand for devices capable of displaying 3D content is boosting the performance of Perth company DDD.

For almost 20 years, DDD Group has been developing and licensing technology that converts 2D content to 3D.

Its customers include Samsung and LG, which use the technology to power their 3D viewing capabilities - every 3D-capable Samsung TV sold worldwide has some Perth-developed technology inside.

As a result of strong sales of its technology to both TV and PC manufacturers, DDD is forecasting revenue to top $US8.6 million for the year to December 2012.

With expectations that the global number of 3D-capable TV sets will increase from 50 million to 125 million this year, the company’s Perth-based chief technology officer, Julien Flack, told WA Business News DDD was poised for continued growth in that market.

“We’re in a very good position to capture a large chunk of that so that’s probably our biggest growth prospect,” Mr Flack said.

DDD makes revenue through licence agreements with manufacturers such as Samsung and LG, and via royalties on every 3D-capable TV set sold.

The same arrangement is in place with personal computer manufacturers, which have been the biggest growth market during the past year.

In its end-of-year trading update, DDD announced sales of components for use in PCs surged 172 per cent; shipments to TV manufacturers also increased, by 67 per cent.

Mr Flack said the PC market had the potential to be more lucrative than the 3D TV market.

“The PC market in the last year or two has had substantial growth for us; the good thing about the PC market is that we can actually get more money per device. In TV our royalty is relatively low because the margins on making a TV are incredibly tight,” he said.

The rapid growth of tablet computers had thrown the PC market into somewhat of a hiatus, Mr Flack said, although growth in demand for the DDD technology needed for mobile phones had offset that somewhat.

The company’s solid performance over 2012 and optimistic outlook for its financial results, which it will release in April, prompted investment bank Cannaccord Genuity to issue a positive forecast for the company.

It’s anticipating DDD’s revenue growth to increase 43 per cent, with operating profit growing 114 per cent in 2013.

The company operates with a headquarters in the US, while its research and development team of 18 staff has remained in Perth since the company was founded in 1993.

Mr Flack said there was no incentive to relocate from Perth considering the bulk of the company’s market was in Asia.

“Being in the same time zone is very useful because you can have multiple conversations in a day, and that’s not really possible from the US; you can have one round of discussions from the US but you can have maybe four or five when you’re here.”

The company was launched with financial backing from Paul Kristensen’s Perth-based investment company Capital Technologies and listed on the London Stock Exchange in 2002.

It has now also listed on the OTCQX market in the US, which Mr Kristensen - who is chairman of DDD - said opened the door to more potential investment.

“We believe that our technology is far better understood in the US than it is in London or the UK, so we [listed on OTCQX] in the belief that when US investors see an exciting technology company they usually tend to drive up the value, and we hope that will be the case with our company but it’s too early to say yet,” he said.

DDD has also launched a subscription service for owners of Samsung and LG smart-TV owners to access 3D movies from a portal -named Yabazam!

It’s also in discussions with potential clients in China for integrating its technology for use with computer games.

Mr Kristensen said a significant change in the market would come once the TV manufacturers started to commercialise 3D-capable sets without the need to wear 3D glasses.

“I wouldn’t have gone into this if the technology needed glasses,” he said.

“There is technology being developed but it’ll probably be another five years or so away until you see glasses-free television coming on to the market, but once that happens you’ll see the entire TV market really shifting into gear.”