ADVANCED material and technology developer QuickStep Holdings plans to boost its presence in the global aerospace and defence markets with the commercialisation of its cutting-edge carbon fibre composite technologies. 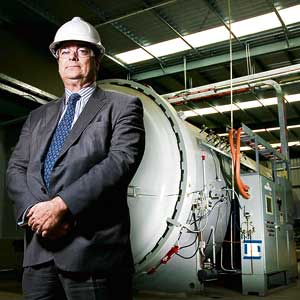 ADVANCED material and technology developer QuickStep Holdings plans to boost its presence in the global aerospace and defence markets with the commercialisation of its cutting-edge carbon fibre composite technologies.

The North Coogee-based designer, manufacturer and developer already has some impressive clients, including the US Department of Defense, Eurocopter in Germany, and BAe Systems in Australia.

These potentially valuable relationships have been possible thanks to the company's subsidiaries located in Dayton in the US, and Munich, Germany, and its alliances with universities in Geelong and Manchester in the UK.

QuickStep listed on the ASX in 2005 and is fast becoming a global player.

Members of the founding family are still significant shareholders, controlling about 25 per cent of the company.

Quickstep chief executive Philippe Odouard, who was brought in about eight months ago to enhance the commercialisation process, said the company had reached a number of significant milestones of late.

In March, QuickStep moved into its $10 million manufacturing plant, the country's most advanced composite aerospace manufacturing facility with the second largest production capacity.

It was awarded official accreditation to the AS9100 international aerospace standard, vital for competing in the stringent aerospace market, which was achieved in just 10 months.

Last month, the company received a $2.6 million Climate Ready grant from the federal government as part of a new program designed to achieve mass production of a new generation of lightweight, low-emission vehicles.

And most importantly, it recently secured a patent for its composite technology, which allows for a significant reduction in time, cost and environmental impact in the manufacture of carbon fibre parts and tools for the aerospace and defence industries.

"We're really a start-up at the moment with huge potential," Mr Odouard said.

"The benefits of using advanced composites have been known for many years, however the traditional barriers to a more widespread adoption of these materials have been low production rates and high costs.

"Currently, we are almost 100 per cent export based, serving clients overseas in the aerospace field and generating about $250,000 in revenue.

"But there is definitely capacity to generate between $50 million and $100 million, and even potential to double that in the future."

Mr Odouard told WA Business News there were three levels for delivering revenue at the business.

The first is transferring the technology and production equipment with technical support and maintenance services provided under ongoing or joint venture arrangements.

Second is the manufacture of composite components for original equipment manufacturers, while undertaking paid or self-funded research and development is the third revenue stream.