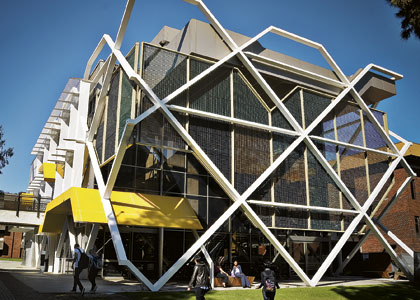 Curtin University has developed sustainable building guidelines independent of the Green Building Council Australia’s Green Star ratings, after having one of its new buildings recently certified under the nationally recognised standards.

But he said that while the rating system had reputational value for the university, it did not target operating building performance.

Without the prospect of marketing the building as Green Star for commercial leasing purposes, the rating was not commercially valuable, he said.

Mr Hewitt said the university was focused on cutting the use of non-renewable energy and water and the reduction and proper disposal of waste associated with construction and building operation.

He said the process did not take into account the facilities available at buildings across the campus. The duplication of services like ‘end-of-trip’ facilities in neighbouring buildings was an example of an outcome that was not necessarily sustainable.

“At the end of the day, if you spend $100,000 building something you don’t need, that is not a sustainable outcome,” Mr Hewitt said.

“We are interested in reducing our footprint, reducing our operating costs and establishing a consistent campus-wide approach that meets our statutory obligations.

“We are long-term building owners, so we are not trying to lease buildings or get a return on those buildings, we are looking to run them using less energy and water and creating less carbon.”

The Curtin University Sustainability Guidelines established targets for water and energy usage and waste creation that would be comparable to a four and five-star Green Star-rated building.

The second stage of Curtin’s engineering pavilion is under construction and Curtin is targeting a four-star equivalent under its sustainability guidelines. The university plans to refurbish all of its existing buildings to the standards in the long term.

Taylor Robinson designed the pavilion and director Leigh Robinson said the project was the first green star-targeted project for the firm.

The firm now aims for a four-star equivalent for all of the buildings it designs. Mr Robinson said that was achievable through intelligent design work and does not incur additional overall cost.

Delivering a five or six-star building can add 10 per cent to the overall cost of the building, according to Mr Robinson.

“From our experience it was very labour intensive in working with the environmentally sustainable design consultant to put together the necessary paperwork,” he said.

“We would be happy to do it again but we would now have a bit more knowledge of what it costs in terms of setting our own time and fee against it,” he said.

Industry sentiment has shifted in terms of Green Star and Mr Robinson said that with the cost of consultants and the cost of the certification process, clients were facing higher fees and added building costs.

“If they can establish their benchmarks then maybe that is good enough,” he said.

Green Star was launched in 2003 and rates a building as 4 star (best practice), 5 star (Australian excellence) or 6 star (world leader).

The Green Building Council states that benefits include competitive advantage in a crowded marketplace, higher returns on investment than non-green counterparts and act as an attraction for tenants that want to future proof against escalating energy and water prices.

A report from the Australian Property Institute last year found that Green Star buildings delivered a 12 per cent ‘green premium’ in value and a 5 per cent premium in rent when compared to non-rated buildings, although it was not stated whether those buildings were commercial.