A new agriculture research centre at Curtin University plans to tackle the $1.5 billion economic impact of crop disease in Australia. 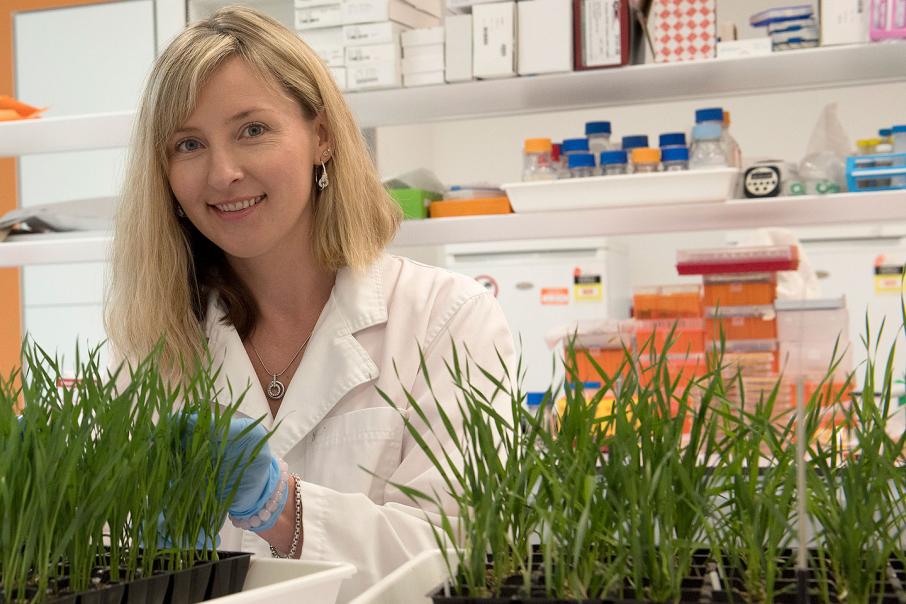 Caroline Moffat and her team will continue the disease gene deletion project at the agriculture research facility (above right). Photo: Curtin University

A new agriculture research centre at Curtin University plans to tackle the $1.5 billion economic impact of crop disease in Australia.

Curtin University and the Grains Research and Development Corporation have deepened an existing research partnership with the recent official opening of the Centre for Crop and Disease Management.

Up to 80 scientists will study crop genetics, fungicide resistance, agronomy, and farming systems (among other things) at the new $43 million national research centre, which is co-supported by Curtin and the GRDC and located at the university.

Curtin vice-chancellor Deborah Terry said the facility offered a space where researchers could advance their work on crop diseases, the primary cause of reduced yields in Australia costing the grains industry more than $1.5 billion a year.

The new building is equipped with plant rooms and specially designed laboratory spaces, which will enable safe and secure experimentation on pathogens that pose a biosecurity threat to farming businesses.

“Australian grain growers have saved more than $100 million a year, and CCDM researchers have contributed to delivering these outcomes to growers,” he said.

“New varieties with higher levels of disease resistance as well as improved disease management practices are contributing to putting money back in the pockets of growers.”

One CCDM project that has shifted into the new facility is research into yellow spot, a fungal leaf disease in wheat spread by wind and splash dispersed through rain.

The disease costs $140 million in crop losses and upwards of $200 million to control in WA annually, according to project leader Caroline Moffat.

By using molecular biology techniques such as genetic manipulation, Dr Moffat and her team have been able to understand how yellow spot operates by looking at the fungus pathogen – the biological agent that causes the disease.

“We think yellow spot has been around for over 50 years in Australia, but its impact on growers has slowly increased every year,” Dr Moffat told Business News.

“We do not genetically modify crops at all, it has nothing to do with that; our research is pre-breeding research.

“Using molecular biology techniques to understand how the disease works in the plant enables us to provide tools to wheat breeders to naturally breed more resistant wheat varieties.”

In recent years, Dr Moffat and her team have analysed the yellow spot pathogen and managed to delete a gene in that pathogen by replacing and encoding the gene using genome sequencing.

As a result, the study was a finalist in the 2014 Eureka prize for sustainable agriculture.

“The fact that we’ve now been able to delete a gene is really significant,” Dr Moffat said.

“We developed the ‘targeted gene knock out method’ and it was the first time it had been achieved anywhere in the world.

“It was a really big breakthrough and now it’s paving the way for the deletion of other genes.”

This deleted gene was the major toxin gene, Tox A, which masks any other toxins the fungus produces.

“By taking Tox A out of the picture it’s essentially revealing what else is going on in that wheat fungus system,” Dr Moffat said.

“Our research indicates that there are several other toxins that have yet to be identified, so our main focus is discovering what those are.

“And that’s how we can develop more new tools.”

The research project has been providing semi-purified Tox A to breeding companies since 2009 for use in screening processes. Dr Moffat said the team would continue to work on screening for other targets for breeders in the new research facility.

“The focus is really on how we can help growers save money,” she said.

“With applications of fungicide, you can get a lot of resistance building up quickly so then the fungicide becomes quite ineffective.

“So if the breeders can put out more wheat varieties that are resistant, that should go a massive way to cutting costs.”

Other research projects in the facility will continue to work on reducing the economic impact of a number of important cereal, oilseed and crop diseases.