Small iron ore miners operating in a $70/t environment are struggling, but in a different way so are the majors battling to satisfy investor expectations. 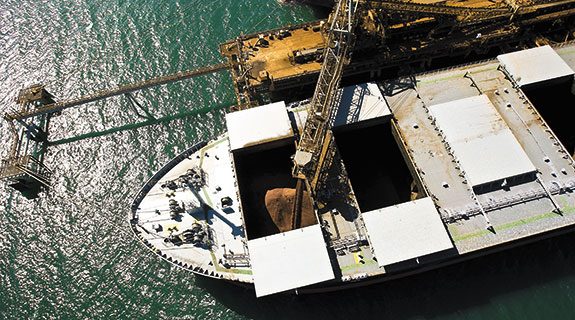 Small iron ore miners operating in a $70/t environment are struggling, but in a different way so are the majors battling to satisfy investor expectations.

David Flanagan is absolutely correct in condemning the ‘scorched earth’ tactics of Western Australia’s biggest iron ore miners, but what the chairman of Atlas Iron appears to be overlooking is that the big miners are also engaged in their own fight for survival.

The state’s three biggest producers – Rio Tinto, BHP Billiton and Fortescue Metals Group – are the companies in Mr Flanagan’s sights because they are continuing to expand despite a fall in the price of iron ore price; one result of which is extreme hardship for small miners such as Atlas.

What Mr Flanagan describes as scorched earth – a military manoeuvre used by a retreating army to deny invaders sources of food or shelter – is ‘market flooding’ to the big miners, because they see it as a way of remaining profitable by increasing productivity (more ore at a lower cost per tonne).

Those two phrases – ‘market flooding’ and ‘scorched earth’ – provide the first clue that opposing sides of the argument, which is creating a crisis for the state government, view the drama in WA’s iron ore industry differently.

The WA audience would like the flooding (or scorching) to stop so that the state’s most important industry can revert to its pre-crash days.

The other audience, mainly comprised of international investors, is unsure about whether the flooding/scorching process is a good idea but is prepared to back management at Rio Tinto, BHP Billiton and FMG – until something better comes along.

From the perspective of some investors, more ore, even at a lower price, means that the big miners might be able to maintain profits.

But, and this is a big but, there are some greedy investors who want it all. They want more ore, stronger profits, and higher dividends – because they have become an extremely important in a world of low returns on most forms of investment.

It is the greedy investors who are seeing WA’s big iron ore miners in a completely different way to most people living in WA.

The simplest measure of the difference is that WA residents (and government) want job creation and project expansion. Investors living outside the state want to see fatter profits, and higher dividends – and they really don’t care how that is achieved.

What that boils down to is tough times today for small iron ore miners that cannot survive in a sub-$US70 per tonne price environment – and a tough time next year for management at big iron ore companies as international investors demand a higher return on their capital.

The first of the big companies to feel the icy blast of international investor demands will be Rio Tinto, which is being forced to perform strongly in a low iron ore price environment today, and will be forced to perform even better when Glencore returns with a fresh merger/takeover approach.

While seen in Australia as a deal unlikely to succeed, that is certainly not the view in London where I have been for the past two weeks. The view over here is one of complete disinterest in who actually runs the iron ore mines – Rio Tinto or Glencore – just so long as the profits are fat and the dividends fatter.

Rio Tinto is effectively on a treadmill that is moving faster by the month, forcing management to seek every possible productivity improvement in iron ore, and to find other ways of boosting shareholder returns, such as raising debt levels to maintain the annual dividend, or by spinning off (through a sale or float) of its aluminium division.

Management at BHP Billiton, despite appearing to be immune from what’s happening, will also cop a blast from investors next year when called on to explain why the company is so heavily exposed to three of the resource world’s most troubled commodities – iron ore, oil and coal – especially if the South32 spin-out is successful.

No-one has yet pointed an accusing finger at the directors of BHP Billiton and said ‘you got it wrong, again’, but if commodity prices stay low that’s what will happen; and that’s when the relatively new chief executive, Andrew Mackenzie, will be asked to justify his position.

FMG is in a slightly different position, but its mercurial founder and chairman, Andrew Forrest, will face demands from other shareholders to quit his multiple external activities, such as solving world poverty, and focus on managing their money (as well as his).

What Mr Flanagan sees as scorched earth and the big miners see as market flooding is really nothing more than market pressure that is affecting different people in different ways.

However, what it’s leading to is a period of intense corporate activity as investors demand higher returns from management and management, in turn, demands greater productivity from the workforce – while in the background, corporate raiders such as Glencore start to circle.

AUSTRALIAN resources stocks undoubtedly rose too high in the boom and are now paying a price for the experience, but to see the next sector of global markets getting set for a big fall take a look at the silly valuations being placed on private taxi companies such as US-listed Uber.

According to one recent calculation, Uber is now valued at $US40 billion, which means it is worth more than Hilton Hotels or the French car market, Peugeot.

It is obviously a ridiculous value to be placed on a business where there are so few barriers to entry and where the consensus view of marketing experts is that there can only be one winner per country in the private taxi revolution sweeping the world.

Uber might be big in the US but it is playing second fiddle in China and other countries because all it takes to set up a rival business is a computer program that matches car owners willing to sell a taxi service with owners of smart phones.

In time, a flood of Uber rivals will drive down the price of car hire services, even if it means annoying governments and destroying the business model of sending conventional licensed taxi services – and wiping out share price of Uber itself.