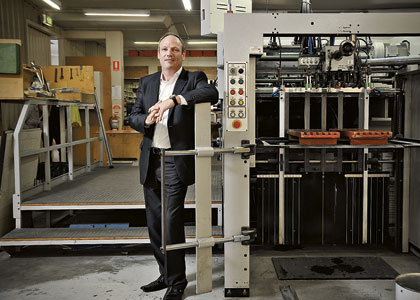 CRANKING UP: John Mitchell with Westcare’s new flatbed die-cutter, which can produce up to 7,500 units per hour. Photo: Grant Currall

PROMINENT disability employer Westcare has undergone a drastic 18-month overhaul of its plant and equipment and its management team, resulting in a $950,00 increase in company profits and a $5 million, five-year printing contract with the Health Corporate Network.

During the past year, Westcare spent $400,000 upgrading its head office and printing equipment and is now focused on delivering competitively priced goods with commercial turnover periods.

Westcare has earmarked its printing, food packaging and safety garment divisions as its areas with the strongest growth potential.

CEO John Mitchell took over 18 months ago and said the biggest difference between how Westcare operated now and a few years ago was the competitive drive in the business.

“A major culture shift has occurred in the business where our supported employees are now engaged in more meaningful employment,” Mr Mitchell told WA Business News.

“We do expect our supported employees to be productive, and in doing so it promotes self-esteem and a feeling of worth; it’s helping the business and them.”

This competitive drive can be seen in the investment made in the company’s printing division, an area Mr Mitchell has earmarked for significant growth.

“We spent a considerable amount on a new flatbed die-cutter, which enables us to produce up to 7,500 units per hour,” Mr Mitchell said.

“The old machine could only produce 600 units an hour.”

Mr Mitchell claims the 12-fold productivity increase has made Westcare as efficient as its commercial rivals.

This was illustrated by Westcare’s ability to win a competitive tender to print and warehouse medical record folders and dividers for the Health Corporate Network.

The five-year contract has an initial period of three years with two one-year options, and has the potential to bring $5 million into the business.

Although Westcare’s printing arm only represents one third of its business, winning the contract is a statement of intent for a company on the mend.

The last time Westcare made headlines was in 2009, when the Department of Health ended its contract with Westcare and chose to use an east-coast printer, Moore Business Systems Australia, citing multi-million dollar savings and quicker delivery times as the key motivations behind the decision.

“When Westcare lost the contract in 2009 the business never really recovered, the work went over east and Westcare was left floundering,” Mr Mitchell said.

When he entered his role as the company’s CEO in May last year, Mr Mitchell faced some tough decisions.

“Westcare had endured significant losses over previous years,” he said.

“The organisation underwent a major restructure of its staff and management, which resulted in significant redundancies; however it has emerged leaner, stronger and more competitive with costs now in-line for the size of the business,” Mr Mitchell said.

Westcare also intensified its focus on its more profitable segments, shutting down its underperforming industrial packaging division and increasing its food packaging capabilities.

Mr Mitchell said these changes were necessary as the business wanted to up-skill its employees from basic manual labour, in the industrial packaging division, and become a competitive entity in its own right through automation of traditional work practices.

“Last year was a recovery year for Westcare where the focus was on cost reduction and investing back into the business,” Mr Mitchell said.