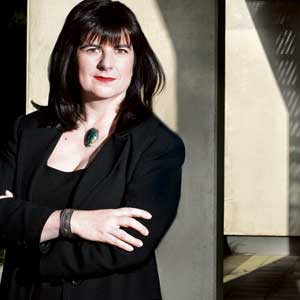 WABN: What has been the most challenging event in your career?

KC: "I directed a production of a new play several years ago. The play had some faults, but I went ahead with the production because it offered me a great opportunity to work at a theatre I loved. I was very proud of the production; the actors were great, the design was beautiful, the lighting exquisite. But at the end of the day we could not disguise the play's faults, and although the production received critical acclaim, the audiences did not take it to their hearts.

"I learned that I must always trust my instincts, not take a job unless I believe in the product because the audience won't either, and that, as Shakespeare said, "the play is the thing". If the play isn't a wonderful piece of work that audiences want to see, then it doesn't matter how beautiful the production is."

WABN: What's best measurement of your performance, and can you name a highlight in your career?

KC: "The best measure of my performance as an artistic director is when I grow opportunities for WA artists and expand audiences by igniting their passion for theatre. The best measure of my performance as a director is when I achieve critical acclaim and a sold-out season. This happened most recently when I directed The Coronation of Poppea for Victorian Opera. It's always a thrill to hear thunderous applause on opening night, and then have a production sell out within a couple of days."

WABN: Is there an organisation/business model that you strive to achieve/reach?

KC: "Because we are moving into the new performing arts venue as resident company, Black Swan State Theatre Company is currently exploring how to create a new model for a state theatre company that is unique to WA.

"We are looking closely at Belvoir Street Theatre in Sydney because it has had such success touring nationally and internationally, it has a streamlined administration and places artists at the heart of its decision making process for its main stage productions. As Black Swan grows we aspire to tour our new work internationally and regionally and to expand the HotBed Ensemble, our development program for emerging artists.

"Most of all we wish to create a model for a theatre company that will inspire and engage as many Western Australians as possible and will bring beautifully told WA stories to the rest of the world."

WABN: Who is someone that you dream to work with?

KC: "I have already had many of my dreams come true because I have worked with Guy Pearce, Helen Morse, Sigrid Thornton, Wendy Hughes and many other great Australian actors, but I have to confess I would love to work with two very fine WAAPA graduates - Hugh Jackman and Frances O'Connor."

WABN: What are the specific hurdles that you meet on a daily basis in your sector?

KC: "I sometimes wish I didn't have to spend so much of my time raising awareness about theatre in WA. I am an artist. I am happiest when I am working with writers, actors and designers.

"As an artistic director it is very important that I articulate a vision for Black Swan, which inspires audiences and the business and arts communities. It is my hope that, once Black Swan's new role as a state theatre company has been clearly defined to all our constituents, I can spend more of my time developing new work.

" I deal with my frustrations at being away from my core work by reminding myself that I am not interested in making art for art's sake, I make art to engage with the community in which I live on a profound and heartfelt level.

"I am lucky that WA's business leaders and government hold theatre in such high regard. Once I re-engage with the idea of collaborating with those sectors I get inspired by the idea that building a theatre company is also a creative act and I kick the hurdles over (I have always been hopeless at jumping them)."

WABN: What frustrates you the most about your sector and what would you do to change it?

KC: "I have only been at my job here six months. In that time, Black Swan has been rebranded, (on October 8), entered into cooperative discussions with Perth Theatre Company, begun preparations for moving into its new venue, and planned its fabulous 2009 season.

"My only frustration is that, at a time of transition that is rich in possibilities for the WA arts sector and offers Black Swan such hope for an exciting and dynamic future, I only have 24 hours in a day."

WABN: What is the best piece of advice you give someone to motivate a team.

KC: "I can inspire people most effectively when I am passionately committed to a project. Then I find it easy to articulate why I believe the project matters and how each member of the team can help to bring about that success.

"I enjoy building teams where each person has a strong sense of responsibility for themselves and for one another, and everyone works together to achieve a great outcome.

"Theatre people are only as good as their last show. If we do bad work our failure is public, the reviewers let us know what they think in print, in blogs, on radio etc and audiences don't come to our next show. Fear of public humiliation and excitement at the possibility of acclaim and praise tend to be great motivators."

WABN: What is the main quality you are looking for within your team members?

KC: "In generalised terms, I look for commitment, flexibility, emotional intelligence and generosity of spirit. I work in a very demanding industry that expects everyone to work long hours and form teams quickly, that generally have six weeks to come together and produce a play.

"So the demands on each team member are very particular. I believe a system is only as good as the people carrying it out, so I work hard to find the person with the appropriate skill set and personality to carry out a particular task. I believe the best teams are formed by people with diverse skills who have various life experiences and I prefer teams that are intergenerational."

WABN: How do you deal with egos in your workplace?

KC: "When I am directing, I work hard to create an environment where egos, including mine, are irrelevant. I aspire to create a workplace based on collaboration and excellence where the best idea wins, not the biggest ego.

"I believe that in an industry where our successes and failures are so public, people tend to behave badly because they are stressed and insecure. When I address the reason someone is feeling insecure, the ego difficulty usually goes away immediately. People expect that an industry like mine would be dominated by egos, but quite the opposite is true. Many of the best actors are introverts and people who work out of humility and compassion."

WABN: Have you read a good book on management that you can recommend?

KC: "The Seven Habits of Highly Effective People by Stephen Covey. It has great tips on time management, which is a constant challenge to me, and I really respond to his insistence that visionary leadership plays a distinct and separate role from management in functional organisations, and that the management structure should facilitate the vision for the company."

WABN: Who has influenced you personally?

KC: "My father, Wal Cherry. He died when I was 20. He was a theatre director and a great humanitarian, and he believed in the transformational power of theatre.

"He was one of the first people in Australia to direct indigenous actors and writers. He demanded a lot of my sister and me, but he was loving and fun and I still miss his clarity, his love of excellence and his toughness. I wish he could see me in my current role as artistic director at Black Swan because he had a great time when he directed in Perth and he had enormous affection for WA actors."

WABN: What is your educational background?

KC: "I received a masters of fine arts in directing from University of California, Los Angeles, and a bachelor of arts in literature from Bard College, New York."

WABN: What were you doing before your current position?

KC: "I was associate director at Melbourne Theatre Company."

WABN: Describe a day at work.

KC: "My days vary wildly, but at the moment I start my day at Black Swan responding to emails and phone calls, then go to WAAPA to direct the third-year graduating students in Cloudstreet, which opens on October 11 at Subiaco Arts Centre, then return to Black Swan to prepare for the launch of our 2009 season at Government House Ballroom."

WABN: Which personality has inspired you the most throughout your career?

KC: "Simon Phillips, the artistic director of Melbourne Theatre Company. I was Simon's associate for five years and I frequently return to the company to direct.

"Simon gave me many opportunities. He is an optimistic, kind leader who makes sure his audiences and employees alike have a great time. He leads by example; he is a great director and an incredibly hard worker and he always celebrates other people's success with grace and generosity."