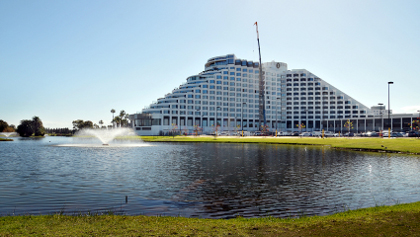 Casino operator Crown's full year profit grew by 53 per cent as revenue from its Australian operations increased on the previous year.

But Crown said gaming revenue growth slowed in the second half of the 2011/12 financial year, in general gaming and also high rollers.

Revenue in the year to June of $2.8 billion was an increase of 17 per cent from $2.4 billion in the previous year.

"During the year, we saw reasonable revenue growth at both properties, although in some areas this was offset by higher operating costs," he said in a statement.

"At Crown Melbourne, in particular, we saw a softening of activity in some segments of main floor gaming and non-gaming operations in the second half of the year, as well as the effects of refurbishment disruption on operating margins."

"We continued to see some evidence of weak consumer sentiment, which has affected some segments of the business, particularly in the second half, while the premium markets maintained their strength."

Revenue from VIP gaming grew but at a lower margin due to higher super tax at Crown Melbourne and increased competition from Asia, Mr Craigie said.

"Our strategy to source new customers from China also continues, as we seek to offset the ongoing impact of the Singapore integrated resorts on our VIP business," he said.

A main contributor to the company's net profit growth was its joint venture in Macau, the Melco Entertainment Group, Mr Craigie said.

Melco delivered a $135.8 million profit to Crown in the year to June.

Non-gaming revenue was up 12 per cent to $190.1 million, on the back of a strong-lne up of shows at Burswood Theatre.

Hotel occupancy at Crown Metropol, formerly known as the InterContinental, was 72 per cent, with an average room rate of $269.