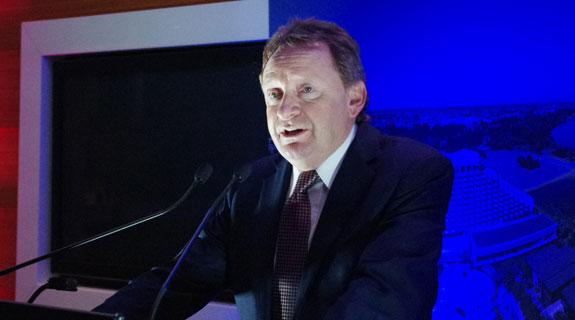 Perth’s tallest hotel, Crown Towers, is on track to be completed by December next year, with Crown Resorts chief executive Barry Felstead staking the claim it will be the best resort in Australia when it’s finished.

At an official ‘topping out’ ceremony to mark the 25-storey project reaching its highest point last night, Mr Felstead said Perth’s Crown Towers would set new standards not only for hotels in Western Australia, but the entire country.

But Mr Felstead said the luxury to be offered at Crown Towers would not be cheap.

“We’ve got some world-class restaurants coming in, one which we will make an announcement about at a later date.

“That will be one of the best restaurants in the world, and this hotel, make no mistake, the amount of money we’re investing, this will be the best hotel in Australia, there is no doubt whatsoever.

“This will be absolutely magnificent.” The view of Perth City and the Swan River from the top of Crown Towers.

Mr Felstead said the project had created 4,500 jobs for its construction phase, while 500 permanent staff would be required to run the hotel, taking Crown Resorts’ total Western Australian employees to 6,300.

“We’ve been lucky with the weather but we are tracking for a December 2016 opening.”

Construction of the $568 million, 500-room hotel is being undertaken by Perth-based Brookfield Multiplex, which was recently named Australia’s largest construction company by the Housing Industry Association.

Mr Palandri said the entire Brookfield Multiplex team was excited when notified by former Crown Resorts general manager of design and construction, James Noel, that the builder had won the bid to build the hotel two years ago.

“The reason we were excited was because we built the original facility here way back in about 1980," he said.

“We still have some people in our office who ran the bid, who were part of this project all those years ago.”

Mr Palandri said Brookfield Multiplex had been building the hotel for a total of 18 months and 14 days.

“There’s been about 8,000 concrete trucks, 2,500 tonnes of steel, 2,500 people have worked on the project and have been inducted so far, and over one million man-hours have gone into the project,” he said.

“It’s going to be Perth’s first major six star hotel, and we’re very excited about that. It’s really been a pleasure for us to see this great world-class facility come up from the ground and redefine Burswood’s skyline.” With the hotel reaching its highest point, Mr Palandri said Brookfield Multiplex’s focus would now turn to the internal fitout of the rooms.

Fit-out of the rooms has already begun, with some rooms up to the third level nearing completion.

“The great challenge for us is this will be a benchmark of quality that Perth hasn’t seen,” Mr Palandri said.

“We’re starting to see the first completed, or very close to completed hotel rooms, and the quality of the fitout is fantastic and it’s something we will all appreciate.”

The practice of a topping out ceremony originated from the ancient Scandinavian religious rite of placing a tree at the top of a new building to appease the tree-dwelling spirits that were displaced during its construction.

The ceremonies have become common place across the world on large construction projects.

As well as placing a five-metre tree on the upper-most floor of Crown Towers, Crown Resorts has also donated 500 trees, one for each hotel room, which will be planted in the surrounding Burswood parklands. The Crown Towers structure has reached its highest point.