The husband and a son of renowned burns surgeon Fiona Wood, Tony and Tom Kierath, are seeking to crowdfund $100,000 by mid-December to bring their swallowable weight-loss device, IG Balloon, to market. 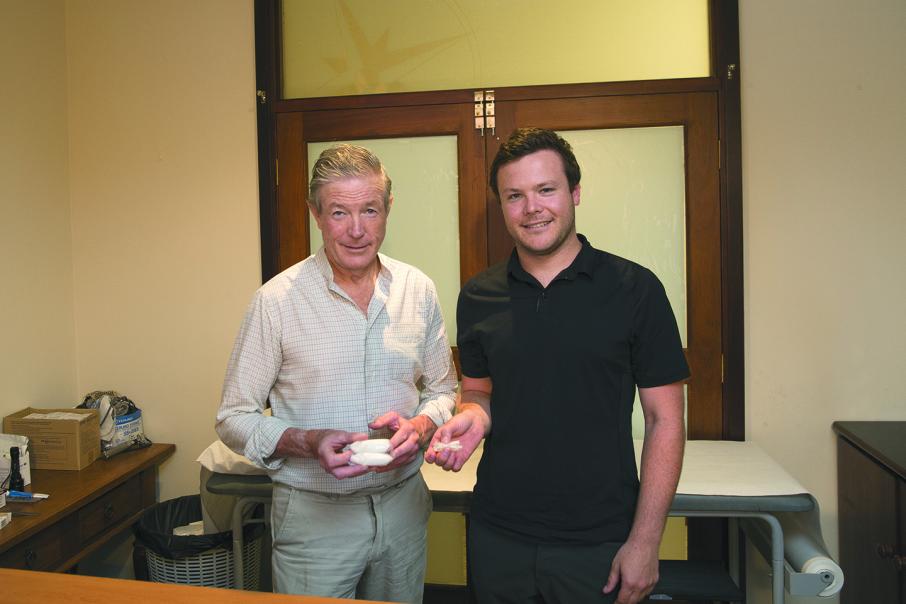 The husband and a son of renowned burns surgeon Fiona Wood, Tony and Tom Kierath, are seeking to crowdfund $100,000 by mid-December to bring their swallowable weight-loss device, IG Balloon, to market.

“The reason we chose to crowdfund is that it allows the people who can really benefit from the device to be instrumental in bringing it to the market,” Tom Kierath told Business News.

IG Balloon is offering early supporter discounts of 75 per cent off the expected retail price ($3,000) as part of its crowdfunding scheme.

Tony and Tom have been developing the product for seven years. They aim to secure marketing approval by the end of 2018, following clinical trials.

The Kieraths bring a complementary skills set to their venture, with Tony a specialist weight-loss surgeon, while Tom brings his technical knowledge as an engineer and chemist.

IG Balloon starts as a small pouch containing two liquids, which are mixed by a GP prior to the pouch being swallowed.

Once swallowed, the pouch is warmed by body heat, causing the liquid to expand into foam, which, unlike liquid and air-filled balloons, offers a permanent treatment.

“It’s a relatively simple device, which is what we were going for, something that could be implanted by a GP, didn’t require an operation, therefore it could be lower cost,” Tom Kierath said.

“But the devil’s in the detail; a huge amount of the time that’s been spent has been refining the internal components (foam).

“That’s something we’ve developed in house and it’s not something you can purchase from a supplier off the shelf.”

With more than 35 per cent of Australians classed as overweight and 27 per cent obese, weight-loss surgery and temporary treatments are growing in demand, he said.

Tom said his father had a passion for treating Australia’s obesity epidemic and had been a weight-loss surgeon for 25 years.

“Unfortunately the problem was just too big to be solved with surgery, it’s grown so rapidly,” he said.

Tom said the project had been self-funded to date, but IG Balloon would be likely to target partnerships with biotech companies once it proved it was a minimal risk investment.

Another of Dr Kierath and Professor Wood’s sons, Joseph Kierath, has been responsible for the campaign’s management.

Professor Fiona Wood will speak at the next Business News Success & Leadership event, on Tuesday November 28.