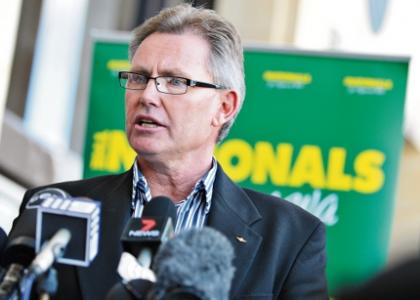 In contrast, the Liberals have sided with east coast National Party MPs, who want parliament to extend existing arrangements until after the next election, likely in late 2013.

Their stance is at odds with the state's major farm groups; the Pastoralists and Graziers Association, WAFarmers and CBH Group all support the government legislation, which is also in line with the findings of a Productivity Commission review.

The PGA has been particularly critical of the WA Liberals, saying they have put coalition unity ahead of their free-market principles and the interests of WA farmers.

Commenting on Mr Crook's decision, Liberal MP Jamie Briggs says Mr Crook does not sit in the coalition party room and that his decision to cross the floor and vote with Labor does not necessarily signal disunity.

Mr Crook declined to sit in either the Nationals or the coalition party room following his election in 2010.

But in May he joined with the Nationals, saying changes in the makeup of the lower house meant the crossbench was no longer the best place for him to advocate the interests of regional WA.

"To refuse support for this bill, against WA industry advice, would be contrary to the best interests of grain growers in O'Connor and WA," he said in a statement.

Mr Crook believes it is his duty as an elected MP to vote in the best interests of his electorate and state, and not be dictated by "east coast-centric politics".

Mr Briggs said every party had its own process of coming to a position on legislation.

"Tony Crook doesn't sit in the coalition party room so it's not for me to make a judgment about what happens in the National Party room," he told Sky News.

"That is for (leader) Warren Truss and Barnaby Joyce and the leadership of the National Party to work through."