THE buoyant economic conditions that prompted the recent wave of new retail developments in the Perth CBD are starting to turn, and while inquiries from retailers remain strong, a downturn in retail spending may dampen demand. 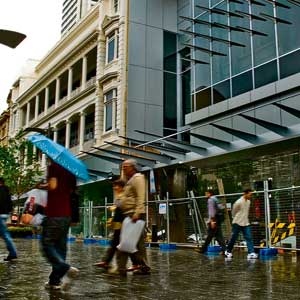 A total of 40,000 square metres of new retail space is due to come online in the Perth CBD over the next three years, including Century City

THE buoyant economic conditions that prompted the recent wave of new retail developments in the Perth CBD are starting to turn, and while inquiries from retailers remain strong, a downturn in retail spending may dampen demand.

A total of 40,000 square metres of new retail space will become available in the CBD over the next three years, and while leasing is progressing for the city's major projects, the forecast for retail growth poses the question of whether there is sufficient demand to support it.

According to Access Economics' September business outlook, released last week, growth in retail turnover in WA is expected to drop to 0.8 per cent in the current financial year, down from 3.2 per cent in FY 2008.

Nationally, growth is forecast to drop from 4 per cent last year to 0.3 per cent.

The report says retail sales in WA are continuing to grow faster than the national average, despite weakness in other sectors like housing and commercial construction.

But, it says a drop in job vacancies and falling house prices are putting pressure on retail growth.

Access Economics director Chris Richardson said the amount of new retail space coming online would be more difficult to absorb as a result of the changing economic climate.

"There's not much demand to support the increase in supply coming up," he said. "In the current circumstances, it makes it more difficult [for retailers]," he said.

But, leasing agents say current demand for retail space in the CBD remains fairly strong despite lower turnover forecasts, partly due to a previous undersupply of new stock.

Prime rents are believed to have reached $5,000/sqm, for some tenancies in Century City, with smaller shops of 30 to 60sqm expected to achieve higher rates.

The vacancy rate for super prime space in the CBD has fallen to zero, according to CB Richard Ellis research, with just four prime lots available in Carillon City. Vacant space is being leased quickly, particularly in Hay and Murray Street malls.

"The level of inquiry, from late 2006, increased steadily for local, international and overseas retailers. I think it reached a peak early this year, and has fallen slightly given world events, particularly over the last three to four weeks," he said.

"But in a like to like comparison with early 2006, the level of inquiry is still stronger now. It's come back a bit from the peak, but in percentage terms, I couldn't say how much."

"Before, national retailers would have done a deal with no or little incentive. Now, they're looking for something extra to make the deal stack up, like cash for a store fit-out," he said.