Diane Smith-Gander’s will to win didn’t disappear when she stopped playing top-flight basketball. 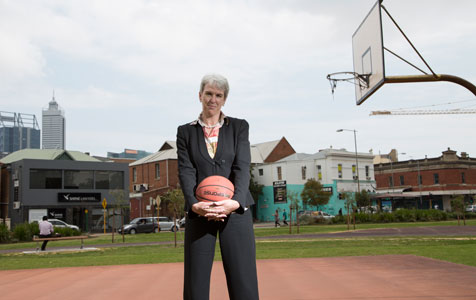 TRANSFERABLE: Diane Smith-Gander says playing representative basketball helped instil in her characteristics she has used to get ahead in business. Photo: Attila Csaszar

Diane Smith-Gander's will to win didn't disappear when she stopped playing top-flight basketball.

Movements in the share price are just as exciting for Diane Smith-Gander to watch now as the scoreboard was when she represented Western Australia in basketball 30 years ago.

Ms Smith-Gander, who is the chair of Transfield Services, a director of Wesfarmers and CBH Group, and commissioner of Tourism WA, has parlayed the skills she learned on the basketball court into her business career.

“You learn something about how to get success and you can take that set of lessons into business,” Ms Smith-Gander told Business News.

“You also learn that desire to win, to compete, to be measured by a yardstick. And so now you look at me looking at the share price, my yard stick, and I get yard stick because I always have that score to look at.”

Until two weeks ago Ms Smith-Gander was also deputy chair at NBN Co, a position from which she resigned to avoid any conflict of interest with Transfield’s role as a lead contractor for the national broadband network (following her promotion from director to chair at Transfield).

Also during her business career she has served as chair of Basketball Australia and the Australian Sports Drug Agency, as partner at US consultants McKinsey & Company, and as a Westpac executive manager.

Aside from organising sporting events as part of her role with Tourism WA, Ms Smith-Gander has removed herself from involvement in sports administration because she said the emotion surrounding sport made governance harder than other industries.

That doesn’t mean she’s not happy to talk about sport, which she said could be an important part of networking, especially in male-dominated boardrooms.

“(So) because I had a working knowledge of sport and had actually achieved on a personal level, it created something to talk about.”

Ms Smith-Gander acknowledges she has taken chances in her career, such as when she lobbied for the director’s role at NBN Co, but insists her long-term success largely relied on education, experience, mentorship and hard work.

“I think you can step out of the expected on occasion and be very successful. So for me, picking up the phone and calling a head hunter (Egon Zehnder) and saying ‘why are you not considering me for the NBN Co board’ worked … but it won’t work every time. That was a pretty special case,” she said.

“I followed the path that I had seen my parents and business people be successful in. The keys are good qualifications, hard work around training and courses, (and) learn from other people.”