What chance a federal government under budgetary pressure may decide to cede future tax wealth to the states? 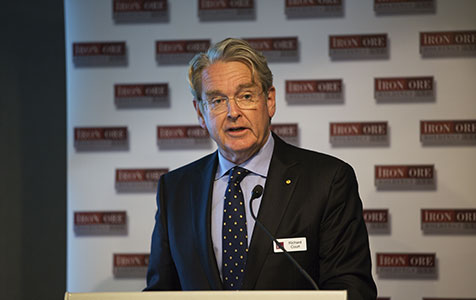 Former premier Richard Court is pushing for a major shake-up in the taxation system to help ensure that state governments, as well as the Commonwealth, benefit from the massive revenue to be generated by new offshore LNG projects.

Under existing arrangements, Mr Court says, no royalties will flow to Western Australia, or the other states, from the huge LNG projects under construction such as Gorgon, Wheatstone, Prelude or Ichthys.

Consequently he has called for major changes in the operation of the petroleum resource rent tax, all of which currently goes to the Commonwealth.

Mr Court says that all states should benefit directly from the billions of dollars in taxation these upcoming LNG projects will generate.

The former premier’s views are contained in a four-page submission to the national commission of audit, which will deliver its recommendations to Treasurer Joe Hockey late next month.

While seeking a better deal for WA from Canberra was a frequent feature of Mr Court’s premiership between 1993 and 2001, this proposal contains an important variation – he has broadened his pitch so that all states would benefit, not just WA.

Mr Court noted that a royalty sharing arrangement for the North West Shelf between WA (negotiated when his father, Sir Charles, was premier) and the Fraser government split the proceeds 70 per cent to WA and 30 per cent to the Commonwealth.

“With the operation of the Grants Commission, much of that 70 per cent is then redistributed to the other states so that all the states benefit from the success of the resource sector in WA,” he said.

Mr Court would like the states to also benefit directly from the new wave of projects when they start to generate big tax revenues about eight or 10 years after production starts.

“My proposal, my relief valve, is that the next generation of PRRT revenues streams from these offshore projects be shared 50:50 with all the states on a per capita basis,” the former premier said in his submission.

“The beauty of this proposal is that the central government has eight to 10 years to take into account that it is not going to have all this massive revenue bonanza hit its books, and the states similarly know that they are going to start receiving access from new growth revenue streams, which will enable them to have more autonomy, and how they make their decisions about the delivery of services that are their constitutional responsibility.”

Mr Court told the commission of audit he had floated the revenue sharing idea before, but with little success.

Referring to the latest chance of success, he said: “It will certainly be opposed by ‘Sir Humphrey’ in Canberra and by many federal politicians in both the Liberal and Labor parties who are attracted to the financial muscle being centred in Canberra.

“The proposal is simple, fair and similar to the sharing already in practice for the North West Shelf project.”

Current federal budget projections have the PRRT raising about $2.5 billion this year. That’s expected to exceed $5 billion by 2019, with revenue growth accelerating sharply – thanks to the new offshore projects, to $15 billion by 2025.

When company tax is added, the combined revenue is expected to top $25 billion. This is why Mr Court feels that the Commonwealth should be willing to hand over some of the spoils to the states.

Hopefully the commission of audit, chaired by Business Council head Tony Shepherd, will recognise the benefit of states having more financial autonomy. On the other hand the federal budget is in diabolical shape when it comes to its revenue-raising capacity, compared with the grand spending commitments of successive federal Labor and coalition governments.

As noted previously in Political Perspective, Canberra’s goal is to return the budget to surplus by 2023-24. That’s why Mr Hockey will be under pressure to suck up all available sources of money.

The push for a ‘Commonwealth take-all’ will be hard to resist.

Certainly there’s unlikely to be pressure from the Labor side. New Labor leader Bill Shorten chose to skirt around the issue when asked about it at a recent leadership breakfast in Perth.

“You are far better off sitting down with people and working something out … the test I would apply to any arrangement struck in the future (is) how will it help this region and this nation in 2020 and 2030?” he said, without being specific on the position a future federal Labor government might adopt.

Right now, the federal government’s attention is focused on the manufacturing industry shambles in south-east Australia.

But with the growing realisation that more medium and long-term planning is essential, as acknowledged by Mr Shorten, the challenge raised by Richard Court is not going away any time soon.