In the third part of our series featuring EY Entrepreneur of the Year nominees, Business News talks to three chief executives in the technology sector. 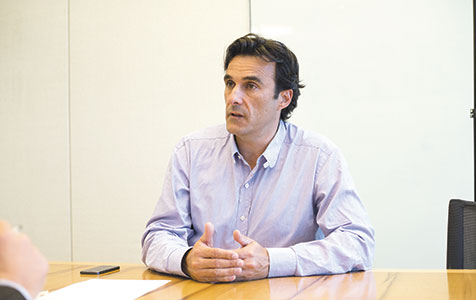 In the third part of our series featuring EY Entrepreneur of the Year nominees, Business News talks to three chief executives in the technology sector.

Michael Ottaviano, who has spent more than seven years running Carnegie Wave Energy, has no doubts as to the major challenge facing most technology companies.

“The major constraint in our life is capital,” he says.

Carnegie takes what he calls a very strategic approach to raising capital, in contrast to some others in the technology sector.

“Capital is often an afterthought for a lot of technology people; they are in love with the technology and naively assume the capital will come if their idea is good enough,” Mr Ottaviano told Business News.

Carnegie opted for an ASX listing to help it raise capital, and Mr Ottaviano is confident that was the right move.

“A lot of people have said we were listing too early. For a lot of tech companies that is the case, but for Carnegie it was the best move we could have made,” he said.

“We’ve raised $100 million in the past five years and we wouldn’t have done that as a private company.”

DTI Group, which specialises in supplying advanced surveillance systems to the global mass transit industry, has also decided to head down the stock market listing path.

Managing director Richard Johnson said the aim of its upcoming IPO was two-fold – to raise growth capital and provide liquidity for existing shareholders.

DTI has already achieved big growth under Mr Johnson, who joined the business in 2005 when it had nine people and $1 million annual turnover

It now has 57 people and $20 million annual turnover, with half its sales in overseas markets, particularly the US.

“Breaking into new markets is always a challenge,” Mr Johnson said, adding that the company’s technology was its biggest selling point.

Saleem Technologies is a relatively new player in the tech sector, and is also interested in raising capital to support its growth.

Established in 2006 by Kashif Saleem, the company has developed a product that tracks materials, typically on construction sites, using GPS and bar codes.

“We are looking for a step-change,” Mr Saleem said.

“We’ve got a product, we know its works, clients know that it works, we have really good case studies and testimonials from clients like Woodside, BHP, BP, John Holland, Monadelphous, Leighton, and we’re currently working on Gorgon.

“We need to build a strong sales pipeline, that’s our challenge.

“So how we solve it is by having partnerships with distributors, and having a strong business development team and sales training.

“We are not looking for investors; so far it is self-funded, but if a good offer comes in, we would certainly think about it.”

Government grants have been a significant contributor to Carnegie’s fund raising.

Last month it announced an $11 million grant from the federal government’s emerging renewables program for its CETO 6 wave energy project.

But Mr Ottaviano believes that, on balance, being part of the clean tech sector has not been beneficial.

“I really don’t think it has helped at all,” he said.

“For about five minutes in 2007 it probably helped, but because it was overhyped it hurt on the way down.”

Mr Ottaviano said Carnegie had been adversely affected by the failure of other companies that promoted a clean tech story.

He said the chopping and changing on government policy has also made it difficult to attract investors.

After some tough times, however, he is now very positive.

“For the first time in Carnegie’s history we are well funded and we’ve got a great team and great technology,” Mr Ottaviano said.

“We can look forward to realise the benefits of a lot of hard work.”

He believes his role is to lead the team.

“My main role is to have created a vision for Carnegie and then make sure I’ve got the people in place to executive that vision … getting them to buy into that vision and making sure they are well resourced,” Mr Ottaviano said.

“It’s certainly not all about me.”

Have a strong board and good advisers is critical for emerging tech companies.

DTI boasts Computershare founder Chris Morris as chairman. He acquired a 20 per cent stake in a 2011 capital raising that made the company debt free.

Mr Johnson said Perth was still the core of the business. All R&D happens here, along with some manufacturing and all product assembly.

Saleem Technologies, which has grown to have 20 staff, works with specialist advisory form Atrico, led by Ivan Gustavino and Kheong Chee.

Mr Saleem, who was a 40under40 award winner earlier this year, said he was inspired by his dad to start his own business.

“I believe it gives me the freedom to make choices, so that I can help others,” he said.

“My two passions are technology and helping others and finding solutions

“The two are a good mix because I use technology to solve problems, and I get paid for it which is really good.”