The City of Fremantle has strongly rejected claims by a local ratepayers and residents group that the civic component of Fremantle’s $300 million Kings Square redevelopment will result in a $30 million loss. 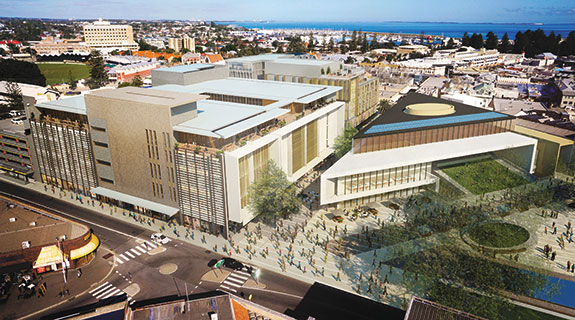 An artist's impression of the new civic buildings, to the right of a redeveloped Myer building.

The City of Fremantle has strongly rejected claims by a local ratepayers and residents group that the civic component of Fremantle’s $300 million Kings Square redevelopment will result in a $30 million loss.

The civic buildings plan, comprising the demolition of the current library and administration centre and replacing them with new facilities, makes up $45 million of the wider redevelopment, which is a partnership between the city and private developer Sirona Capital.

The catalyst for the project to proceed is a decision by the state government over which department it will move to Fremantle to anchor the 30,000 square metres of office space in the proposal. An announcement is expected in coming months.

To fund the city’s contribution to the project, the City of Fremantle has agreed to sell the Queensgate car park, the Queensgate Centre and the old Spicer’s Paper site to Sirona, for a total of $29.5 million.

The remaining $15.6 million will be funded by a combination of debt and capital from the city’s strategic investments fund.

According to a business plan developed in 2012, the project will result in a net present value of $4.47 million and generate a rate of return of 6.15 per cent, giving the city a retained asset value of $97.2 million in 20 years’ time.

But Fremantle Ratepayers and Residents Association chairperson Mark Woodcock told Business News that while the association supported the project in principle and wanted to see it go ahead, he did not believe it was possible to generate a positive net present value for the redevelopment.

Mr Woodcock said the association’s own calculations had found it would result in a $30 million loss in its current form, and it would take around 50 years to recover the initial investment cost from the revenue generated from the proposed new civic buildings.

He said the association had been asking for details on how the council arrived at its figures since October last year, but none had been provided to date.

“The Kings Square redevelopment needs to be done in a transparent manner from a financial management point of view,” Mr Woodcock said.

“The Fremantle council needs to make that clear in the business plan.”

City of Fremantle chief executive Graeme Mackenzie said he was putting together a detailed response to the FRRA’s claims, which would include how the city and its consultants calculated the return on investment the project would provide.

However, that response was not available before Business News went to print.

Mr Mackenzie said the city was confident the business plan, which was adopted in November 2012 and developed in collaboration with a team of independent consultants, was accurate in its calculations of the potential end value of the project.

“This is Fremantle’s most important revitalisation initiative and from the outset we’ve made sure all aspects of the project have gone through a thorough due diligence process, the business plan included,” he said.