A small batch of bauxite sent overseas for refining may signal the start of a much bigger play by Alcoa, which would have major consequences for WA’s South West. 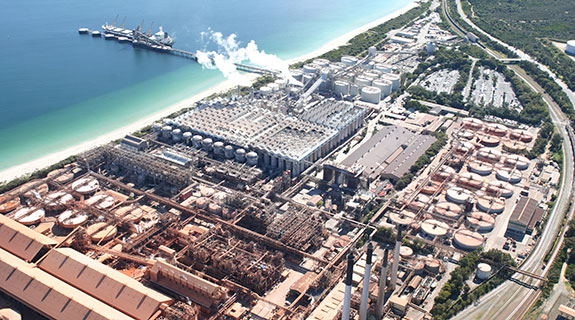 CHALLENGES: Is the future secure for Alcoa’s refineries in WA?

A small batch of bauxite sent overseas for refining may signal the start of a much bigger play by Alcoa, which would have major consequences for WA’s South West.

One small step for Alcoa could turn out to be the first step in the eventual closure of the biggest mineral processing industry in Western Australia’s south – alumina production at its refineries in Kwinana, Pinjarra and Wagerup.

There are no plans to make such a dramatic move, yet, and the Worsley refinery of BHP Billiton spin-off, South32, is also unaffected, so far.

In recent months, however, the company that created the industry in WA in 1961 has challenged a pillar of the state’s big alumina exporting business.

Alcoa, which now operates in Australia as Alcoa World Alumina and Chemicals (AWAC), sent trial shipments of unprocessed Darling Range bauxite to overseas alumina refineries; a seemingly innocuous development, but an important one because until now it had been assumed that low grade South West bauxite had to be upgraded locally to alumina before being exported.

The poor quality of Darling Range bauxite, which assays between 27 per cent and 30 per cent aluminium oxide (alumina), meant that direct shipping of unprocessed ore was regarded as uneconomic.

Low levels of reactive silica offset low alumina levels in the ore, cutting the consumption of expensive caustic soda used to ‘digest’ the bauxite. Thus, Alcoa built its first refinery at Kwinana, which sent most of its alumina to Alcoa’s first Australian aluminium smelter at Point Henry near Geelong in Victoria.

The cost of power, either as gas used in the alumina process or electricity, is critical in the three-stage process of making aluminium (bauxite to alumina to aluminium) – a fact that has earned aluminium the nickname of ‘congealed electricity’.

That might be changing, because the AWAC trial shipments of Darling Range ore to overseas alumina refineries appear to be based on changing economics in the global alumina/aluminium industry, and a much tougher approach to its business interests by US-based Alcoa.

Last year’s decision to close the Point Henry smelter and associated aluminium rolling mills was an example of Alcoa fighting back against lower-cost rivals, mainly those with access to cheap power.

While the results of the trial Darling Range bauxite shipments are not yet known, they might confirm that the South West ore cannot compete with the high-grade material exported by Rio Tinto from its big mines near Weipa on Queensland’s Cape York Peninsula, or from the West African country of Guinea.

But the fact that trial shipments of Darling Range bauxite have been made is a significant development for WA, and not necessarily in a positive way.

Neither Alcoa nor its local partner in the South West refineries, the stock exchange listed Alumina Ltd, which owns 40 per cent of AWAC, has made a formal announcement of the ore exports.

The only mention of the shipments came during a question and answer session with investment analysts by senior Alcoa management after the release of the company’s second quarter profit result.

Reports of the trial Darling Range bauxite shipment have been sketchy, with only a handful of investment banks picking up the subtle but important shift by Alcoa.

Goldman Sachs noted in a report on the Alcoa profit result that, during a conference call, Alcoa management mentioned the company had “deployed samples of bauxite for testing to customers to determine its suitability and potential for bauxite exports”.

Citi, another investment bank, also mentioned the bauxite trials, telling clients that AWAC had sent the shipments while also noting that WA bauxite is a lower grade than that produced in tropical locations such as Weipa and Guinea, “which has historically made it uneconomic to export”.

“This (the export of bauxite) could provide an additional revenue source for AWAC,” Citi said.

However the trial shipments also raise a question about how to generate the highest profits from Darling Range bauxite.

Until now it was assumed that conversion to alumina was the only business option; but that could be changing, given WA’s high cost environment, especially for power and labour.

On top of the cost question, a change has occurred in the bauxite/alumina phase of the aluminium business, with a surplus of refining capacity boosting demand for bauxite ore, prompting traditional exporters such as Rio Tinto to plan a major expansion of its Weipa operations.

What direct shipping of bauxite might mean for WA is that AWAC’s oldest refinery at Kwinana could go the same way as the Point Henry smelter it used to supply with alumina, switching to the far simpler business of a bauxite export facility.

Whatever the outcome, a process has been started by AWAC’s trial Darling Range bauxite shipments, with the results potentially very significant for WA.

IF there is a single place where the problems of WA’s iron ore industry can be seen on a daily basis it is Port Hedland, where a rising tide of ship movements highlights the challenge for small miners to stay in business.

Last month, according to data from the Pilbara Ports Authority, 209 ore carriers moved in and out, a 12 per cent increase on June last year, with the volume of ore carried rising by 14 per cent to a record 38.3 million tonnes.

Breaking records at Port Hedland would once have been treated as good news, because the north-west town was the epicentre of WA’s iron ore boom.

Today, a record level of shipments is a first step in a process of oversupplying the world’s steel industry with ore and then watching the price of future shipments slip lower.

This simple comparison of numbers tells the story. In June the volume of ore from Australia and Brazil reaching China rose by 10 per cent, with the price of ore falling by 11 per cent – a perfect example of action and reaction.

GAMBLING and smoking have always gone together, but the financial link has never been as well exposed as it has in the Chinese casino capital of Macau, where a total ban on smoking in casinos, including rooms reserved for high rollers, is being debated.

What concerns casino owners is that fat cat gamblers generate much of a casinos profits; and when a smoking ban was introduced in mass gambling rooms, revenue dropped by 12 per cent because the smokers had to duck out for a quick fag between games.