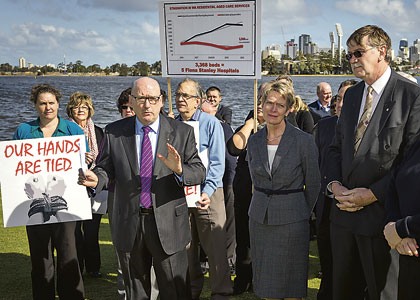 “The government’s aged care package will see increasing funding for residential aged care. This year’s subsidies will be $310 million more than last year.”

Funding was set to increase in 2014 as a result of the government’s Living Longer Living Better reforms package, he added.

The sector continues to push back, however, with figures from the state’s peak industry body for the aged care sector, Aged & Community Services WA, indicating providers now face average funding cuts of over $14,000 per resident, per year.

Amana Living, one of the state’s largest aged care providers, has claimed the federal budget changes mean a decrease in indexation funding of $500,000, while a further another $1 million will be lost in the adjustments to the Aged Care Funding Instruments.

Amana says the total funding drop of $1.5 million converts to a loss of 60,000 hours of care to its residents.

Acting chief executive Suzi Cowcher said the impact of the changes on individual residents was being lost in the discussion.

“It is the sort of issue where it is very easy to get caught up in a macroeconomic view of the world,” she said.

“Providers like us very much look at it from the perspective of whether real people going to be affected by decisions made elsewhere.”

All aged care residents are assessed by the federal government’s funding system on their care requirements, with funding provided according to which category of services they require.

Funding is reassessed each time a resident goes to hospital and returns to residential care, or other major changes occur.

Ms Cowcher said the previous system had allowed Amana Living to obtain data on how the funding cuts in this year’s budget had affected individual residents.

She said 40 of Amana Living’s 820 residents had been admitted to hospital during the past six months and had their funding for accommodation and basic daily fee reassessed. One resident, who requires a high level of care, has had her funding cut from $85.13 a day to $59.43.

“How can we provide care for her when her care needs haven’t changed,” Ms Cowcher said.

“I totally understand that government funding isn’t a bottomless pit, but the way this has been approached is not a way that considers the impact on a specific resident, in a specific facility who needs real care.”

The federal government has the lion’s share of responsibility in funding aged care in Australia and is tipped to spend $8.2 billion on aged care in 2013.

A report by the Productivity Commission last year found several inadequacies in the funding and structure of funding for aged care and, as a result, the government released its Living Longer Living Better reforms package.

Reforms will come into play in 2014 and aim to increase the maximum supplement payment for residents who cannot cover the costs of aged care accommodation, from $32.58 a day to $52.84 per day.

Aged care providers base their financial modelling for building new rooms and accommodation sites on the funding, but because building costs are substantially higher in WA than the eastern states, construction activity has fallen behind need since 2007.

Aged & Community Services WA chief executive Stephen Kobelke said it cost $240,000 (on top of land costs) to construct a single bedroom with ensuite in WA, compared to $180,000 on the east coast, because of higher labour costs.

There is a significant shortfall in the funding an organisation receives for building a room ($114,000) and what the room costs.

Under the federal government system, bed licences are issued annually, based on projected residential aged care needs; providers apply for licences and, if they are successful, secure funding to provide beds.

The prohibitive cost of building in WA led to an under-subscription of bed licences in 2007, the first time that had happened nationally. In WA, licences have been undersubscribed every year since, leading to a shortfall of 3,368 beds in the state.

Mr Kobelke said the people who should be thinking most about the aged care capacity issues facing society are the children of the baby boomers, who would inevitably want to stay at home.

“Home care is going to be increased in the package the government has announced, quite dramatically, it is going to be made much more available and that is a big positive,” he said.

“The people who should be worried most are between about 30 and 40,” Mr Kobelke said.

“They are the ones who are going to have to look after their parents.

“If this doesn’t get right it is going to be the children of the (now) 60 year olds who in 15, 20 years’ time are going to be trying to get their parents into an aged care facility in WA, when there won’t be any.”