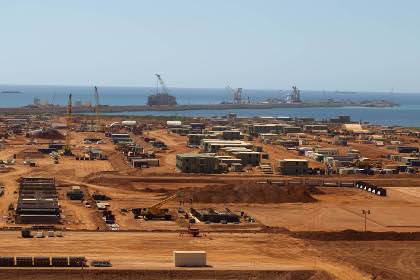 The cost of building the Gorgon LNG jetty and marine structures has doubled to $1.8 billion, Leighton Holdings has disclosed, citing an increased scope of work along with "technical and other challenges".

The contract, awarded to a Leighton Contractors-Saipem consortium in November 2009, was originally valued at $900 million. Leighton said today the value of the contract has been increased to $1.85 billion.

Leighton chief executive Hamish Tyrwhitt said the scope of the contract had evolved since 2009, with the addition of extra fabrication and transportation work.

"The project has also encountered some weather related challenges which have led to a revised execution methodology requiring the consortium to provide additional resources to complete the work in a safe and timely manner," he said in a statement.

Mr Tyrwhitt said Chevron and the consortium "have agreed a way forward which provides Chevron certainty in the delivery of the jetty facilities in October 2013".

A Chevron spokesman said the changes to the jetty schedule had not affected its commitment to deliver "first gas in late 2014 while maintaining the project budget".

“Although later than the originally agreed schedule, this still provides a comfortable margin of time to finalise commissioning and delivery of first gas in 2014,” the Chevron spokesman said.

Located on Barrow Island, an A-class nature reserve off the Pilbara coast, the Gorgon project is budgeted to cost $43 billion, making it the largets resources project under construction in Australia.

One of the key aspects of the jetty contract is the fabrication (in Kwinana), transporting and placing of 56 giant concrete caissons on the sea floor at Barrow Island, where they will form part of the superstructure for the 2.1 km long jetty. Each caisson weighs 4500 tonnes and has a 26 metre diameter.

Mr Tyrwhitt said the consortium has placed the first of these on the seabed, using GPS technology to ensure precise positioning 15-metres below sea level. He said this was evidence that Leighton was "on track in successfully delivering the project".

"Our progress to date confirms that, despite the technical and other challenges of this huge project, the Leighton Group continues to work closely with its client, Chevron Australia, to deliver the country's biggest natural gas project," he said.

Chevron's Gorgon Area general manager Colin Beckett told journalists in March that the scheduling of various work packages had changed during the construction process but this had not affected the overall project timeline.