The time when corporates sponsor a sporting team because they like it is over, says Netball WA chief executive Simon Taylor. 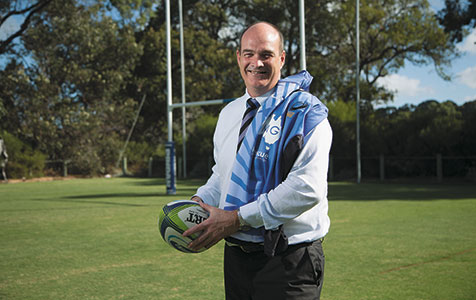 The time when corporates sponsor a sporting team because they like it is over, says Netball WA chief executive Simon Taylor.

It’s a sentiment that resonates with sports organisations across the state and has prompted new and innovative ways of luring corporate sponsorship.

“Telstra, for example, are very keen on getting further integration into the market … being much more connected to the end user rather than just slapping their brand on the dress,” Mr Taylor said of what its major sponsor expects from a partnership with Netball WA.

In response to those sorts of demands, the organisation has employed additional staff so it can give more attention to proving the impact of sponsorship deals.

And it’s not alone in its ramped-up efforts to score corporate partners; this year RugbyWA came up with a new way of securing sponsorship to combat what it described as a challenging marketplace.

Instead of following tradition and securing one ‘front of jersey’ sponsor for the 23 jerseys in the team, RubgyWA offered businesses the opportunity to claim a single jersey of their own.

“This initiative came about as a means of thinking outside the square to counter current challenges in the market,” RugbyWA chief executive Mark Sinderberry told Business News.

“The result was yet another shining example of Western Australians wanting to support their own.”

It resulted in 17 different businesses coming on board, which raised a total of $750,000.

Of these sponsors, 14 were locally based businesses, including Clough, Navitas and BC Iron.

RugbyWA told Business News the money goes towards supporting the elite Super Rugby team as well as increasing participation across the state.

Like RugbyWA, Mr Taylor said Netball WA’s 980 grassroots clubs were a large part of sponsorship deals because of the increasing focus sponsors were putting on community engagement.

In one example, access to Netball WA’s 100,000 participants was an incentive for the Insurance Commission of Western Australia to commit about $825,000 worth of sponsorship recently.

Mr Taylor said negotiating the deal took at least five months, much longer than it would have taken about five years ago.

“We’re definitely seeing things tighten up, but we’re just having to do more to combat that.”

The commission’s sponsorship of Netball WA is part of it expanding its 14-year support of the West Australian Country Football League.

This is the first year its expanded the ‘Belt Up’ campaign to other codes – adding Netball WA and RugbyWA – to a total of $2 million over three years.

Meanwhile, Ausdrill is entering into its third year as a major partner of the Hockeyroos.

The partnership began in 2012 and broke the Hockeyroos’ decade-long drought without a major sponsor.

It has provided high-profile branding for Ausdrill with the mining contractor’s logo on the team’s jerseys and across the team’s bus, but has also enabled it to increase engagement with the communities in which it operates.

Last month the hockey team travelled to Kalgoorlie for the second time since Ausdrill became a sponsor of the Hockeyroos.

Ausdrill managing director Ron Sayers said taking the team to where Ausdrill was founded was part of the company’s dedication to the community.

“These trips have been focused on engaging with the community, giving residents – particularly children – opportunities to interact and learn from the players, as well as see them in action on the hockey field,” Mr Sayers said.

The ability of sporting events to lure community-focused investment also extends beyond the field or pitch.

The recent Margaret River leg of the Association of Surfing Professionals world tour resulted in $84,000 being raised by local business members for not-for-profit organisation SurfAid.

The event included the SurfAid Cup competition, which involves eight teams of four fundraisers teaming up with a professional surfer.

Each team is tasked with raising $5,000, which goes to SurfAid – an organisation working to improve the health and wellbeing of people living in isolated regions.

The combined total of the eight teams took the total amount raised since the SurfAid Cup was first held in WA to more than $220,000.