Falling share and commodity values are poised to redefine the mining landscape. 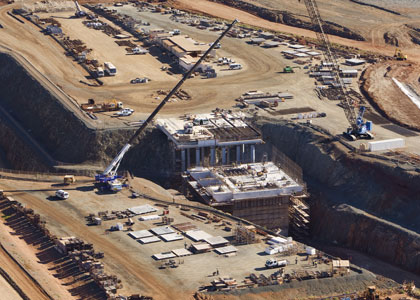 Falling share and commodity values are poised to redefine the mining landscape.

There has been much talk and speculation about jockeying for position among exploration companies as their cash runs out.

With funding extremely difficult to get, those with the best hands to play have a cash buffer, maybe even a producing asset or two operating at relatively low cost, and the patience to wait for the right opportunity.

Panoramic Resources pulled that trigger early, making a few acquisitions last financial year. It was a rare move in an otherwise stalled market.

In recent weeks, corporate advisers have claimed there has been a considerable increase in activity. That, of course, has been preparatory work, with all the action beneath the surface rather than in deals struck.

All that activity was aimed at being ready for October, when investors become truly aware of how little cash their investments have.

That will only have been exacerbated by the sudden dive in commodity prices and the resulting cancellation of expansion plans at the big end of town, so we will have to wait and see whether those who were contemplating corporate activity in the next few months will still have an appetite for risk.

All of this brief analysis could also be extrapolated to the bigger operational miners.

As I mentioned, the major players have made some serious decisions to curtail their expansion plans in Western Australia.

BHP Billiton went first, in August, shutting the gate of a proposed $20 billion outer harbour development at Port Hedland which was intended to give it the capacity to increase exports by 100 million tonnes per annum.

While there was already much conjecture about the likelihood of the outer-harbour project, other news has clarified just how much concern this is among the big players that demand and prices may be subdued indefinitely. This month, Fortescue Metals Group said it planned to cut $1.6 billion in capital expenditure and $300 million in operational costs, sacrificing 1,000 workers.

While FMG said it still planned to complete the expansion of its Christmas Creek mine and commission the low-cost Firetail deposit at Solomon to achieve a production capacity of 115mtpa by the end of March next year, it deferred its target of 155mtpa until market conditions improved.

The market has since been buoyed by news that China’s economic planning body approved projects to build highways, ports and airport runways, that analysts estimate at $160 billion, about a quarter the size of the massive stimulus package unleashed in 2009 in response to the global financial crisis.

But that is not enough to restart stalled projects, especially when announcing public works plans is very different from getting them under way. Similarly, companies like FMG and BHP Billiton don’t easily flick the switch on major investment programs.

They will be wary of taking the plunge for some time.

That leaves the big miners in an awkwardly similar place to the explorers. Certainly, they don’t come with quite the same cash crisis. Yes, FMG is a relatively expensive producer but it is lowering costs where it can and reining in additional debt plans that would have further eroded margins.

Nevertheless, it is well known the Pilbara’s two biggest players, BHP Billiton and Rio Tinto, have much lower costs and can endure a dramatic downturn in prices.

Arguably, a sustained drop in the value of iron ore might even suit the big players, just as those with capital in the exploration game can start cherry picking the projects their cash-strapped rivals have to find a buyer or partner for.

Rio Tinto remains committed to expanding from its current capacity of 225 million tonnes per annum to 283mtpa in 2013 and to 353mtpa by 2015 because its Cape Lambert export facility remains the cheapest.

Rio Tinto reckons it will cost $15 billion for the 128mtpa capacity lift, or around $120 a tonne of new annual capacity, and an estimated 40 to 45 per cent of that is actually the cost of mine expansions to feed the port, leaving actual logistics infrastructure at more like $70 per tonne.

By comparison, BHP Billiton was talking about $20 billion to add 100mtpa to its export capacity via the proposed outer harbour.

This was always going to be more expensive than Rio Tinto’s options – which is why BHP Billiton was so keen on the failed iron ore joint venture with its rival a few years ago – although I can’t pin down if $200 per new tonne of capacity was exclusively just the harbour or included the mines to feed it.

I suspect it was the logistics alone but even if you carve out 30 to 40 per cent on mine development, $120-$140 per tonne is close to twice the cost of Rio Tinto’s port plan.

The cost issue is much different in the inner harbour, despite the constraints there. BHP Billiton last year committed to pushing out that capacity from about 155mtpa to at least 220mtpa at a cost of $7.4 billion, of which $4 billion is on additional mine capacity. That’s $61 per tonne, theoretically cheaper than Rio Tinto’s expansion, by my numbers.

BHP Billiton hopes it may even squeeze this up to 240mtpa with ‘debottlenecking’ processes.

FMG has the right to expand its inner-harbour capacity to 120mtpa, making it the next biggest player as Port Hedland strains to reach a theoretical 495mtpa, with additional miners such as the Hancock Prospecting-led Roy Hill project, Atlas Iron, Brockman and others muscling in on the action.

Those other parties are expected to have 75mtpa of capacity operating by 2017, with investment decisions well before that. Ultimately, they are expected to want 125mtpa between them.

So, BHP Billiton will be looking at all that capacity and wondering if any of these smaller players will really come through with the goods. Perhaps it would be cheaper to buy out these rivals and take up their capacity?

For instance, FMG is currently worth around $11 billion in terms of market capitalisation. That’s $91 per tonne of production. Ignoring its mines and reserves, and even much of its rail, an acquisition might be worth it just for the port capacity.

Arguably some of the other players could be even cheaper. BHP Billiton may not have the appetite for such a move right now but if it remains bullish on China over the longer term then it would not be difficult to make the case for acquisition over construction.

The question is whether the price will fall further and stay there long enough to start really damaging an actual miner like FMG, not to mention others that do not have an earnings stream of any significance.

This is leading to additional speculation that FMG and Hancock Prospecting’s Roy Hill project could do a deal. I’m sure there are a dozen other variations on this theme being discussed in the boardrooms of Pilbara asset owners.

Each will be waiting to see what the news is out of China and wondering who can last the longest under the circumstances that evolve.