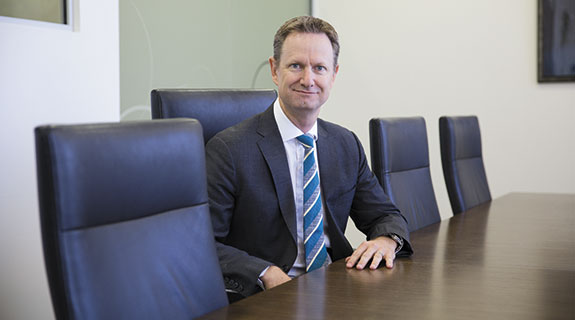 We've analysed 450 WA takeovers and capital raisings worth $18 billion to rank the top advisers and brokers. For more stories see the Special Report, where we also rank the top lawyers and analyse the surge in the number of backdoor listings.

Thirteen years ago, Andrew Haythorpe was involved in the sale of a gold project into a lifeless tech company called 131shop.com.au.

He suspects it was the first backdoor listing into a failed technology company, after the dot.com crash.

Now Mr Haythorpe has come full circle in his role as managing director of Liberty Resources, presiding over the sale of IT company Cirrus Networks into his moribund exploration company, which is seeking a new lease of life.

More than anything, these deals illustrate the cyclical nature of business in Western Australia – and right now the corporate finance sector is struggling near the bottom of the cycle.

They also demonstrate how enterprising company directors and dealmakers can spot opportunities in a difficult situation.

Some might be surprised to know that the total value of WA-related deals actually increased in 2014, though that was off a low base in 2013. 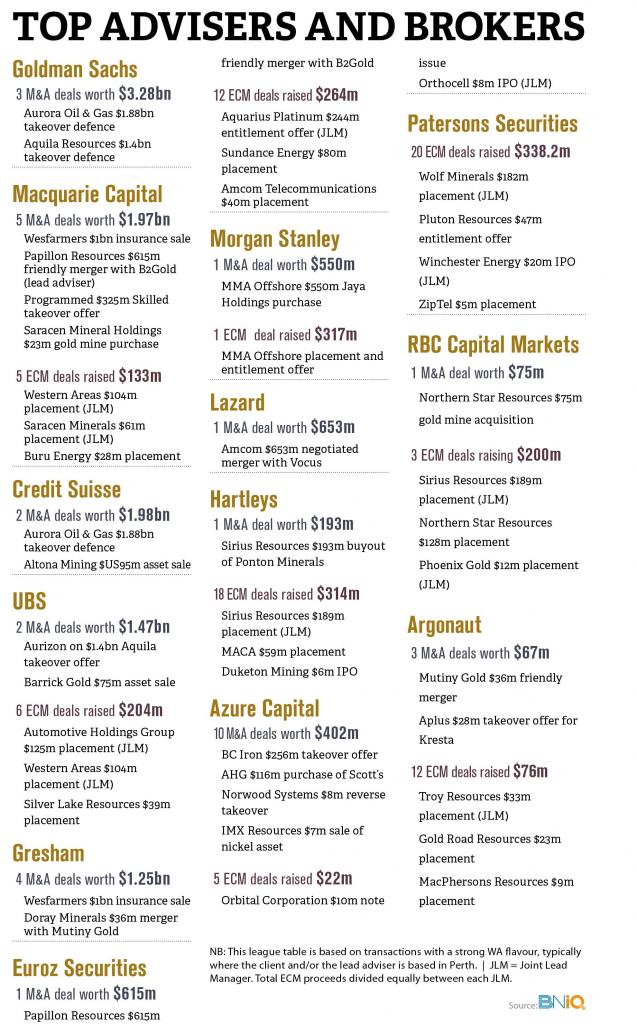 The value of announced M&A deals jumped to $14.3 billion in 2014, according to data compiled by BNiQ, helped by a handful of big transactions, such as Woodside Petroleum’s purchase of Apache’s LNG assets and the takeovers of Aurora Oil & Gas and Aquila Resources.

Perhaps more telling, the number of announced transactions dropped to 187, and this included 25 backdoor listings such as the Liberty-Cirrus deal.

The growing number of backdoor listings was about the only bright spot in the market but these are invariably small transactions and are not going to deliver the fees that investment bankers seek. 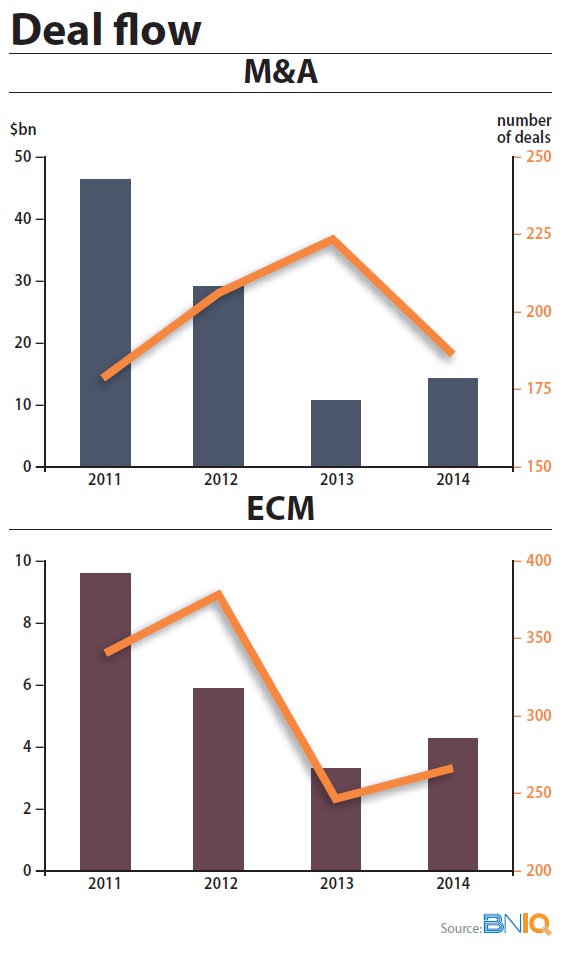 In equity capital markets, the total value of WA capital raisings rose to $3.79 billion, but once again off a low base.

In 2014, Goldman had a lead role on the two biggest takeovers of Perth-based companies.

The Perth office also assisted on two international transactions involving WA assets. (These are not included in the league table.)

Goldman Sachs handled the $3.2 billion sell-down by Shell of a 9.5 per cent shareholding in Woodside.

It also advised US-based Apache Corporation on the recently announced $US2.75 billion sale of its stake in the Wheatstone and Kitimat LNG projects.

“Our goal was always to build a business that was successful over the long term, which requires a focus on building relationships, not just chasing deals,” Mr Watson told Business News.

“Our strategy was also based on being able to deliver Goldman Sachs’ global capability to our Perth clients.

“What’s pleasing is that in addition to the cross-border roles, we’ve been winning work with Perth-based clients, which is our focus.”

“A team approach is a real strength of our business globally and it is no different in Perth,” Mr Watson said.

“After all, we’re here to deliver the global network into Perth.”

They were all pipped last year by Sydney-based Macquarie Capital, which worked on nine WA-related deals.

Macquarie, along with boutique corporate advisory house Gresham Partners, continued to benefit from a close relationship with Wesfarmers.

They both advised on the $1 billion sale of Wesfarmers’ Sydney-based insurance business.

Papillon’s scheme booklet gave a rare insight into the corporate finance sector, because buried in the 604-page document was a table specifying the fees paid to each adviser (see illustration).

This included $2.5 million paid to Macquarie for its role as lead financial adviser.

The booklet has raised eyebrows in the investment-banking world because, as well as the fee disclosure, it showed that Papillon paid three other financial advisers for what was a relatively straightforward deal.

Deutsche Bank and Canada’s BMO Nesbitt Burns were paid $1 million each and local broking house Euroz Securities was paid $500,000 for its work.

While Macquarie and the global investment banks handled the big transactions, local firms such as Euroz, Hartleys and Azure Capital handled a much larger number of deals.

Azure, for instance, advised on 10 M&A deals, including BC Iron’s $256 million takeover of Iron Ore Holdings, and seven capital raisings.

With commodity prices expected to stay low after big drops late in 2014, and most businesses focused on cost cutting, investment bankers are wary about tipping an upturn in activity.

Privatisation is one area offering opportunities, but the Barnett government’s cautious approach means little is expected in 2015.

Rothschild and Deloitte have been appointed to jointly advise on the sale of the Kwinana Bulk Terminal and the Utah Point facility at Port Hedland, while EY will handle the sale of Perth Market Authority. 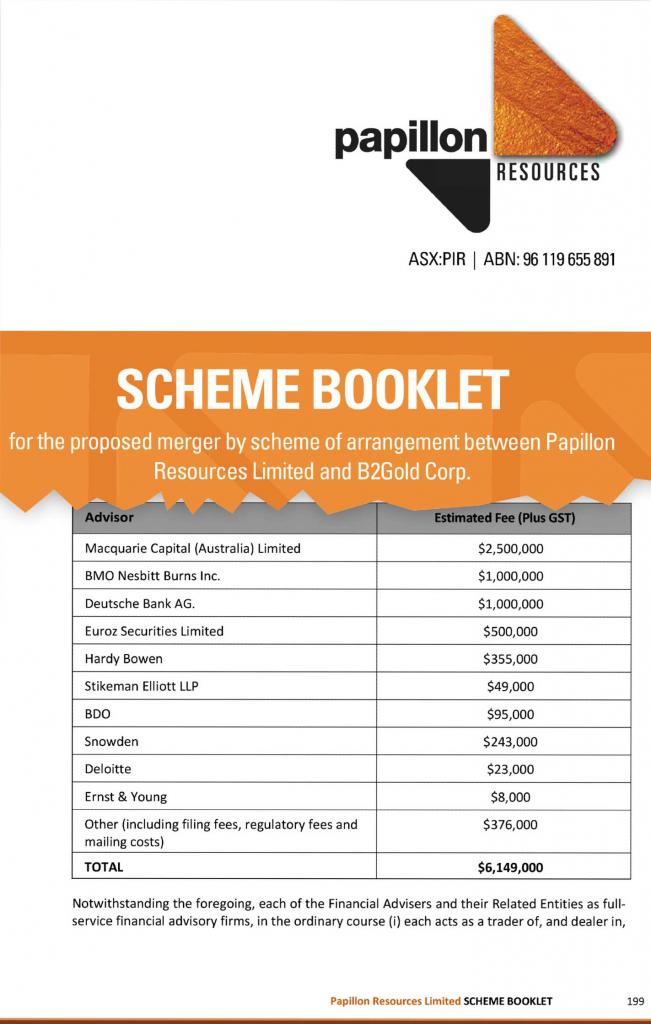 The slump in iron ore prices will make the port sales particularly challenging; most investment bankers are hoping the government will eventually proceed with the sale of bigger assets like the TAB, the Port of Fremantle and the energy utilities.

Agriculture is seen as another possible growth area after attracting new investment in 2014 from the likes of Andrew Forrest and Gina Rinehart, but it’s not a sector likely to create big opportunities for corporate advisers.

He expects that, as commodity prices stabilise at lower levels, more deals will get done.

“The buyers and the vendors will start to come together on valuations.”

Mr Lisle said mining services firms could learn from deals in other sectors.

For instance, Lazard advised Amcom Telecommunications on its merger with Vocus Communicatons, which he said was a good example of the kind of deal that would add value.

It is an all-scrip deal, so there is no cash outlay, and the merged group expects to achieve substantial cost synergies and improved revenue.

For more details, go to www.businessnews.com.au/Corporate-Finance