Black Mountain Resources Limited is pleased to update shareholders on the following restructure initiatives that have been agreed to by the Company and its major lender, Richmond Partners Masters Limited, subject to any necessary shareholder approvals, formal documentation and regulatory sign off: • BMZ to dispose of its interest in the Namekara Vermiculite Mine in exchange for the retirement of circa A$5.5m of debt (Transaction). The Company’s debt levels will be reduced to approximately $A600,000. • BMZ to retain, subject to minimum expenditure obligations, a 75% interest in its existing Busumbu Phosphate Project as well as all other non-vermiculite minerals currently held by its subsidiary company, Namekara Mining Company Limited (Existing Tenements).

Emmerson Resources Limited is pleased to announce that discussions on the future of the Tennant Creek Mineral Field (TCMF) JV with Evolution Mining has resulted in a proposed new ownership structure that reflects the differing size and corporate objectives of the companies. For Emmerson, this unlocks greater near- term value for our shareholders and provides a better strategic fit in terms of delivering high margin projects across a shorter time horizon. Under the restructure, Emmerson will retain a 100% (instead of 35% under the current terms of the TCMF JV) of all the gold dominant assets, prospects and associated exploration ground. Under the restructure, Evolution will take a 100% holding in the tenements (or parts of them) that contain the Gecko, Goanna, and Orlando copper-gold prospects, constituting some 6% of the entire TCMF land position. These prospects are predominantly copper rich but have potential for gold grades to increase at depth. Further exploration of these prospects will require deep drilling. Evolution intends to test these prospects for potential new discoveries of scale at depth and along strike.

Metalicity Limited is pleased to report that settlement has occurred and funds received from the recent brokered private placement with Australian and international institutional and sophisticated investors (“Private Placement”) co-lead by Echelon Wealth Partners Inc., Paradigm Capital Inc. The Private Placement comprising 52.53M shares at A4.5c per share, with a 1 for 2 free attaching option exercisable at A8c was strongly supported by key North American institutions.

Red 5 Limited advises of its intention to make a conditional off-market takeover bid for all of the fully paid ordinary shares n Bullseye Mining Limited. Bullseye is an unlisted public company whose Western Australian-based gold portfolio includes the Laverton Project, located ~30km to the north of the Darlot Gold Mine, the Southern Cross Gold Project and the Aurora Gold Project. Bullseye shareholders will be offered 1 fully-paid ordinary share in Red 5 for every 5 Bullseye Shares they hold1. The Offer values the equity in Bullseye at approximately A$4.016 million2 at the current trading price of Red 5 shares.

The Board of Tyranna Resources Limited is pleased to announce strong market and shareholder support for a capital raising, that will advance exploration at the company’s recently acquired Eureka Gold Project in Western Australia. The funds will also be directed towards the acquisition costs for Eureka (refer ASX announcement dated 1 December 2017), new opportunities and working capital. The capital raising of $2,550,000 was managed by CPS Capital and was by way of a Placement of 150 million shares at $0.017 per share as approved by shareholders at the 2017 Annual General Meeting. The placement will also include the issue of one free attaching option (TYXOC – listed options exercisable at $0.04 expiring on 6 October 2021) for every two shares taken up, subject to shareholder approval.

Triton Minerals Limited is pleased to announce that the Company today entered an agreement with Gregory James Sheffield and Grafex Limitada under which the Company has agreed to purchase Sheffield’s 20% interest in Grafex. On completion of the purchase, Triton’s interest in Grafex will increase from 80% to 100%, and accordingly Triton will have a 100% interest in its graphite projects in Mozambique. In consideration of the purchase, Triton has agreed to pay Sheffield US$1.5 million.

Golden Rim Resources is pleased to advise that it has received commitments to raise $3.5 million through a placement of approximately 87.5 million fully paid ordinary shares to institutional, sophisticated and professional investors. The Placement, which was undertaken at an issue price of 4 cents, was heavily oversubscribed.

Eden Innovations is pleased to announce that the Company has agreed to make a placement to institutional and sophisticated investors, of approximately 56,500,000 ordinary shares at an issue price of 11 cents per share, to raise approximately A$6.2 million

Helix Resources Limited is pleased to advise that further to its ASX announcement on 15 January 2018, it has now completed the sale of its interests in the non-core Yalleen Iron Ore Project (YIOP). The YIOP hosts the Kumina Creek West and Robe Exit Channel Iron Deposits (CID). The YIOP also forms part of the larger West Pilbara Iron Ore Project (WPIOP), located in the West Pilbara region of Western Australia. In exchange for its interests in the YIOP and all of Helix’s other rights and interests in the YIOP tenements the Company has received a total consideration of:  A$0.5 million cash; and potential future consideration of  an uncapped 1% free on board (FOB) royalty on any iron ore produced from the Yalleen Tenement Area (E47/1169, E47/1170 & E47/1171); and  an uncapped 1% net smelter royalty (NSR) on certain future precious and base metal production from the Tenement Area.

Forte Consolidated Limited refers to its announcement dated 23 January 2018 in respect of its proposed acquisition of the Mt Lucky Project (M38/1256), from an entity associated with Executive Chairman, John Terpu. The Company wishes to advise that the parties have agreed the cash consideration payable by the Company for the Acquisition be reduced by $10,000 to $250,000 and the share consideration has been increased in value by $10,000 (at a deemed issue price of $0.02 per share). Accordingly, the total number of shares to be issued to the Vendor for the Acquisition will be 15,000,000 shares.

Blina Minerals is pleased to announce a Placement of 550,000,000 fully paid ordinary shares at 0.1 cent per share to raise up to $550,000 to sophisticated investors

Dimerix Limited, a clinical-stage biotechnology company developing new therapeutic treatments using its proprietary assay technology has raised an additional $4.5 million through the issue of 37,500,000 shares at 12 cents per share to wholesale and institutional clients of Westar Capital and Baker Young Stockbrokers who acted as Joint Lead managers to the Issue. Dimerix is now funded to advance and deliver on its clinical milestones and partnering programs. On 24 January 2018, Dimerix announced that it had received acceptances of $3,056,116 from the recently closed 1:2 Entitlement Offer at 12 cents per share with the shortfall of $2,468,790 to be placed in the near future. Subsequent to the January announcement, Dimerix opened up the Entitlement Offer shortfall to new investors and received a substantial amount of interest. Given the strong demand for the stock, the Board determined to accept additional funding of approximately $2 million, (with allocations scaled back) to accept a total of $4,500,000 (37,500,000 shares at 12 cents per share) in new funding, with the oversubscription amount to be issued under the company’s placement capacity pursuant to LR 7.1 and 7.1A (see below). The total funds raised, when combined with the acceptances to the Entitlement Offer completed in January 2018, is $7,556,116 before costs.

ServTech Global Holdings Limited is pleased to advise that the binding sales agreements executed with The Agency Group Australia Limited are now complete. The final condition precedent of the Agreements was The Agency’s subsidiary Vision Capital, receiving a real estate agency licence from the Western Australian Department of Mines, Industry, Regulation and Safety. The Agency has received this licence. With the successful completion of this transaction, ServTech will receive $950,000 for the purchase of its real estate businesses.

KIN Mining is pleased to advise that it has reached agreement with Beacon for the sale of 3 leach tanks, 6 adsorption tanks, a 450kW ball mill and a fine ore bin discharge and feed conveyor for a sum of $600,000 (plus GST).

Doray Minerals is pleased to announce that it has successfully raised $25M through a two tranche placement comprising approximately 89.3M shares to be issued at $0.28 to institutional and sophisticated investors. 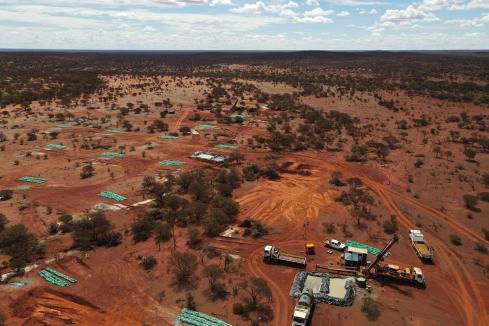