PHILANTHROPIST John Corbett, whose son was born with a disability, was one of the founding members of Jolimont-based Activ in 1951, known then as the Slow Learning Children's Group. 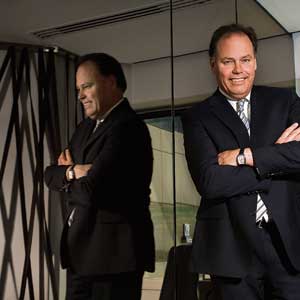 PHILANTHROPIST John Corbett, whose son was born with a disability, was one of the founding members of Jolimont-based Activ in 1951, known then as the Slow Learning Children's Group.

In the late 1980s, under the auspices of Activ, a group called Hawkevale was developed to provide a means for parents or carers of people with a developmental disability to make plans for the time when they are no longer able to look after them, and to assist in the implementation of those plans.

Hawkevale was incorporated separately in 1989 and renamed The Hawkevale Trust.

The trust is recognised for its creation of long-term plans for developmentally disabled people, including the provision of accommodation, for personal support services such as life-long visiting and advocacy, and managed trust funds.

It also assists families with a free wills service by liaising with local solicitors familiar with the needs of people with developmental disabilities and their families.

Mr Corbett, who died in April 2008, ensured continued support via a generous bequest to The Hawkevale Trust, in what has been described as his final, lasting legacy.

In the not-for-profit organisation's information and policy booklet, Mr Corbett wrote that, as an ageing parent, he was constantly worrying about the future of his intellectually disabled son, Keith, who had lived his lifetime in the family home and familiar surroundings.

"It is great to find an organisation that will look after my son, according to my wishes," he wrote.

As well as having a colourful World War II history that included service in Syria, Lebanon and the Kokoda Track, Mr Corbett had a lifelong commitment to people with disability.

He and his wife, Ivy, were the primary carers for their son and understood the concerns of others in their position regarding the long-term care needs of a disabled family member.

The Hawkevale Trust chairman, Laurence Iffla, said Mr Corbett would be honoured for his contribution to Activ and the trust, as well as for his "significant" bequest.

Mr Iffla told WA Business News that $15,000 of the bequest would be distributed through the inaugural John Corbett Personal Support Service Grant on December 3.

"John Corbett was a remarkable man and his memory will live on in this bequest for a personal support service grant for a family in need," he said.

Mr Iffla said the grant would give a family peace of mind, knowing their disabled family member would receive ongoing support, lasting until the end of their lifetime.

Families with a member with an intellectual or developmental disability or acquired brain injury are eligible to apply for the grant.

The Hawkevale Trust, which has experienced slow growth in its 20-year history, does not receive government funding and survives mostly through bequests.

Mr Iffla said that the current difficult economic climate led the organisation to recently mail out requests for funding, the first mass fundraising initiative the trust had undertaken.

He said that the board was implementing strategies for the trust to become totally self-funded and that it expected a significant number of bequests to be executed in the next 10 to 15 years.